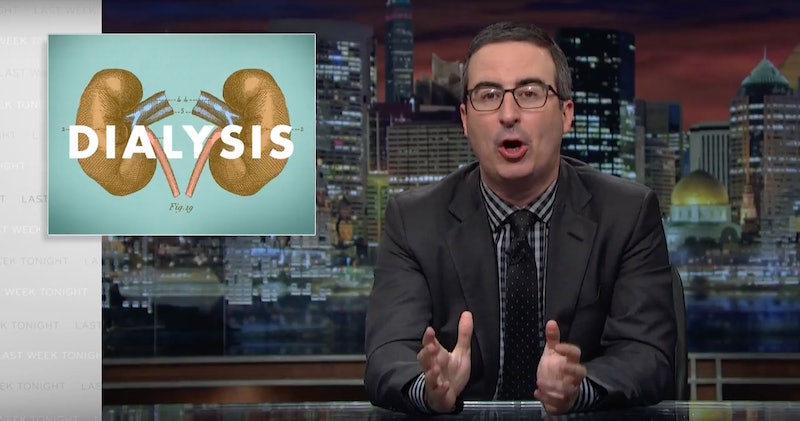 'Last Week Tonight With John Oliver'/HBO
By Sarah Friedmann
May 15, 2017

On Sunday's episode of Last Week Tonight, John Oliver took on an unexpected yet important topic: kidney dialysis. In his main segment on the show, Oliver encouraged organ donation after highlighting many of the issues faced by patients undergoing kidney dialysis in the United States. And if you stand with him and want to promote organ donation too, you can use the Twitter hashtag "WhenIDiePleaseTakeMyKidneys."

Oliver explained that, interestingly, Richard Nixon signed legislation that mandated that the federal government pay for kidney dialysis treatment — aka life-saving treatment for those with failing kidneys — for any American who needs it. While this is a wonderful government service, kidney dialysis services have become dominated by two private medical treatment centers, which then bill the government for their services.

According to Oliver, some of these treatment centers unfortunately often take shortcuts that put patients' health at risk in order to ensure that they make as much profit from the dialysis procedure as possible. Some of these shortcuts include cutting short the dialysis procedure short in order to accommodate more patients, overprescribing medication, and not encouraging or educating patients about kidney transplants, which provide those with failing kidneys a much better chance at long-term survival than does dialysis.

In order to combat some of these issues with kidney dialysis companies, Oliver suggested that they need to be more strictly regulated. He also further indicated that Americans can help each other through organ donation, which would make more kidneys available for transplant and reduce the amount of people relying on dialysis. Oliver suggested donating one’s kidney as a very generous example of what one could do to help those in need. He also indicated that a less extreme, but still very important option consists of signing up to be an organ donor, which would ensure your organs are donated post-mortem. The host proposed that audiences use the hashtag #WhenIDiePleaseTakeMyKidneys to indicate their support for organ donation and to encourage others to sign up to serve as donors.

Oliver's in-depth look at the kidney dialysis industry and emphasis on the importance of organ donation clearly resonated with many Twitter users, who praised him for highlighting the topic and indicated that they were in support of his push for organ donation. Many individuals also indicated on Twitter that they had friends or relatives who were undergoing dialysis and noted that Oliver's segment hit particularly close to home.

Overall, it was very moving to watch Oliver highlight a topic that is incredibly important and affects millions of Americans, yet receives little regular mainstream media coverage. If you are inclined to heed Oliver's advice, consider signing up today to become an organ donor, which could allow you to positively impact many lives.

More like this
The Music Industry Continues To Fail Black Women
By Precious Adesina
Celebrities & President Biden Are Enraged By The Leaked Roe v. Wade Decision
By Alyssa Lapid
How To Fight For Reproductive Rights, Based On How Much Time You Have
By Courtney Young
LGBT+ Men Fleeing Afghanistan Were Denied Asylum By The Home Office, New Findings Show
By Sam Ramsden
Get Even More From Bustle — Sign Up For The Newsletter