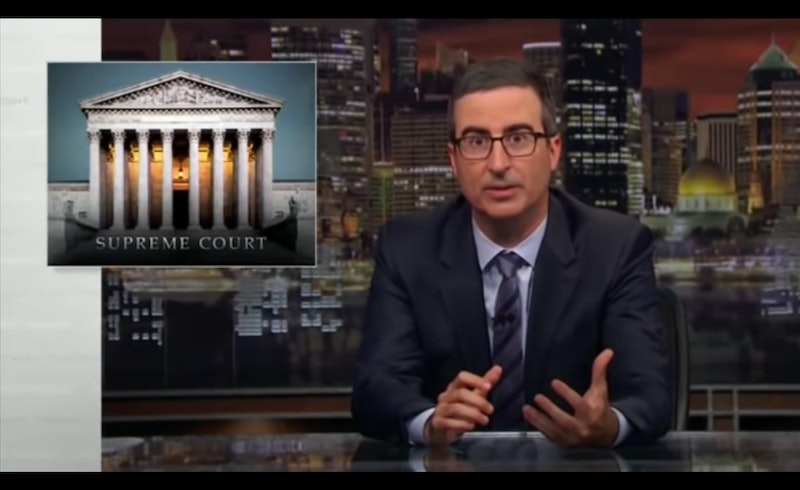 Sunday's episode of Last Week Tonight opened by discussing the confirmation hearings of Brett Kavanaugh, Trump's nominee to replace the late Justice Antonin Scalia on the Supreme Court of the United States (SCOTUS). As he reflected on Kavanaugh's hearings, host John Oliver also advocated for SCOTUS term limits, pointing out what he believes is problematic about appointing justices for life.

Oliver noted that some Americans' concern about Kavanaugh's nomination centers on the notion that, if confirmed, Kavanaugh will be appointed for life. This means that Kavanaugh's confirmation could have implications for decades to come. Oliver then asserted that now "might be a good time to ask" why lifetime Supreme Court appointments exist in the United States.

As the late-night host described, lifetime judicial appointments are "extremely unusual." The host then played a clip of Eric Segall, the author of Supreme Myths: Why the Supreme Court Is Not a Court and Its Justices Are Not Judges, reflecting on the issue during an interview on CNN. As Segall described, "There is not a judge in any democracy who sits on the highest court in their land and has life tenure." Notably, while some other countries appoint justices for life terms, they often impose mandatory retirement ages for these justices.

On his show, Oliver shared thoughts similar to those of Segall, commenting:

Lifetime appointment to the highest court is one those things that is uniquely American. Like the Super Bowl. Or drinking Budweiser. Or tolerating Sean Penn. No one else understands why Americans do those things. And if you think about it, it is a little weird.

The late-night host then pointed out some of the problems that he believes can result from lifetime SCOTUS appointments. As Oliver described, with lifetime appointments you "run the risk" of justices "staying past the point that they can mentally do their job." The comedian played a clip of Larry Kramer, a former SCOTUS clerk who served during Chief Justice Warren Burger's final term, describing how several of the justices at the time were in their 80s and not "all there." Kramer then noted that it would be left to the clerks to use the justices' past opinions to decide how they thought the justices would rule on new cases.

Oliver noted that this was highly problematic, saying,

Just think about what he's saying there: Law clerks were reverse-engineering decisions based on justices' past rulings. That is not good. You don't want a hospital intern saying to a patient, 'Listen, the doctor's a little out of it today, but the last time someone came in here he amputated his arm, so let's just go with that, shall we?

Moreover, the late night host also pointed out that he believes that arguments against terms limits are "pretty weak." For example, he indicated that some people believe that imposing SCOTUS term limits would politicize the nomination process. Oliver balked at the idea, noting that he feels the process is already highly political in nature. As the comedian asserted, "[That] ship ... has emphatically sailed at this point."

Oliver wrapped up his SCOTUS segment by noting that he also thinks that introducing SCTOUS term limits is essential because most Americans actually support the idea. The comedian shared a poll from Morning Consult/Politico that revealed that over 60 percent of voters support term limits for SCOTUS justices, including 58 percent of Republicans and two-thirds of Democrats.

Overall, while acknowledging that introducing Supreme Court term limits might be challenging because it would likely require a constitutional amendment, Oliver believes it would be worthwhile, especially considering the national support for the idea and some of the negative consequences associated with lifetime appointments. "The point is, seeing as most Americans want Supreme Court term limits, let's just ... put them in place once and for all, so that history doesn't look back at us like a bunch of dumbbells," the comedian asserted.

More like this
'Waterloo Road' Is Back, With More Than A Few Familiar Faces
By Sam Ramsden and Vivian Iroanya
Buckingham Palace Aide Resigns Over “Unacceptable” Comments To A Black Guest
By Shahed Ezaydi
Matt Hancock Broke a Major Rule With I’m A Celeb
By El Hunt
What To Know About Martin Bashir After Watching 'The Crown'
By Bustle UK
Get Even More From Bustle — Sign Up For The Newsletter