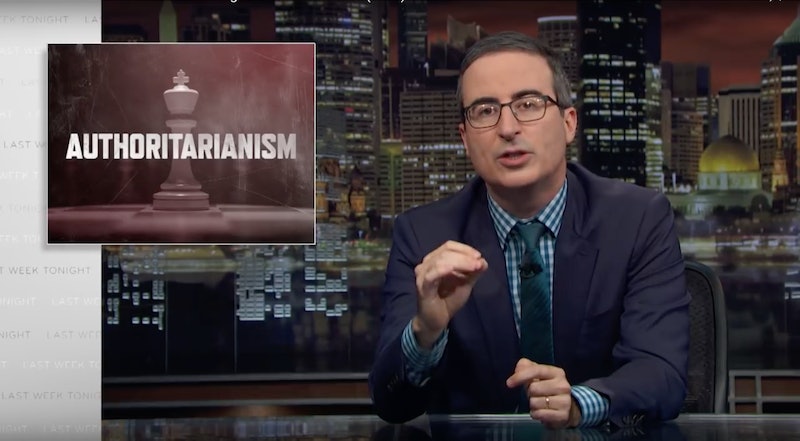 On the season finale of Last Week Tonight, host John Oliver said that authoritarianism is becoming a dangerous global trend, citing examples from around the world to illustrate his point. The late night host also urged Americans to remain vigilant to help ensure that authoritarianism does not similarly take hold in the United States.

Oliver opened his authoritarianism segment by suggesting that there's been a "troubling rise of authoritarian leaders around the world." The host cited Vladimir Putin of Russia, Xi Jinping of China, Viktor Orbán of Hungary, Recep Tayyip Erdoğan of Turkey, and, Jair Bolsonaro of Brazil as some examples of leaders from around the globe who demonstrate authoritarian tendencies.

The comedian said that he wanted to take a closer look at the characteristics of authoritarian leaders to assess "what can make them so appealing to people and to what extent this country [the United States] is headed in the same direction." Oliver then described in detail three characteristics that he believes epitomize authoritarian leadership: projecting strength, demonizing enemies, and dismantling institutions.

For the first characteristic, projecting strength, Oliver explained that many authoritarian leaders seek to show strength at the state and individual levels, to compensate for the "concern that they might be seen as illegitimate." Oliver cited over-the-top Russian military parades and Putin's own workout regime as examples of this tendency.

The host then described the second characteristic, demonizing enemies. He asserted that authoritarian leaders "often go out of their way to identify and sometimes manufacture a group of evil-doers from whom they and they alone can save the country." The comedian used the case of Rodrigo Duterte of the Philippines to illustrate this point. As Oliver described, Duterte "rose to power" after mounting a campaign against drug crime. As president, Duterte's characterization of those associated with drugs as enemies of the Philippines has resulted in the often state-sanctioned death of over 12,000 people.

Oliver subsequently explained his final characteristic, dismantling institutions, noting that, "as they gain power, authoritarians will try to weaken any [institutional] check on them." The host indicated that cracking down on freedom of the press and the independence of the judiciary are classic examples of institutional dismantling. He then cited Poland's forced early retirement of Supreme Court justices as an example of how leaders can (and do) covertly consolidate power.

The comedian wrapped up his segment on authoritarianism by indicating that he believes that President Trump demonstrates aspects of these three characteristics. As Oliver put it:

He [Trump] loves appearing strong, he actually wanted a military parade, and, when it comes to demonizing enemies, he's gleefully gone after immigrants and other marginalized groups ...

However, Oliver noted that, while he thinks that Trump displays characteristics of an authoritarian leader — and that many support him because of it — the United States' institutions have prevented it from becoming an authoritarian country. For example, Oliver indicated that lawsuits have caused Trump's administration to backtrack on several controversial decisions. Some of these decisions include revoking CNN reporter Jim Acosta's press pass and instituting a travel ban on individuals from several predominately Muslim countries (though a revised ban was later held up in court).

While noting the strength of American institutions, Oliver warned that Trump is "testing the system" and urged Americans to "remain vigilant." He asserted that the public must continue to hold the Trump administration accountable and must keep voting in elections, emphasizing that Americans should never become "complacent." Oliver certainly wholeheartedly believes that "the world is dabbling with something very dangerous right now" and the United States is not immune to the threat of authoritarianism.