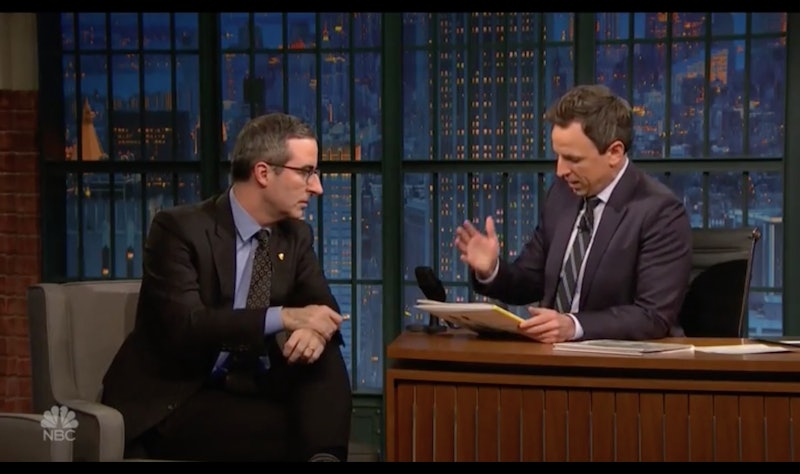 During an interview with Seth Meyers on Tuesday night, John Oliver revealed that his Marlon Bundo Book sales are way outpacing his expectations. The book, Last Week Tonight with John Oliver Presents A Day in the Life of Marlon Bundo, is a parody of a new children's book about Vice President Mike Pence's family pet bunny, Marlon Bundo. The parody book has already sold over 180,000 copies. Indeed, its sales are outpacing sales of the actual book, Marlon Bundo’s Day in the Life of the Vice President, written by Charlotte Pence, and of James Comey's new and highly anticipated memoir.

According to Vanity Fair, Oliver's book, which was written by Last Week Tonight writer Jill Twiss, tells the story of a rabbit named Marlon who falls in love with and eventually marries a male rabbit named Wesley. The rabbits also endure criticism from and ultimately defeat a stink bug who thinks that two male rabbits should not be able to get married (as Vanity Fair pointed out, the illustration of the stink bug looks a lot like Pence).

Oliver explained to Meyers that he has no issue with Pence's pet bunny, but, rather, "The beef comes in regarding Michael Pence, who has a history of, let’s say, homophobic views ... And so we did a whole piece [on the show] about his appalling views over his career ... so ... what we thought we would do, is write our own [book] .. on the quiet." Oliver also described the subject of the book as a story about "Marlon Bundo falling in love with another male bunny and getting married, because that's absolutely fine. It's a sweet children's book ..."

Oliver also revealed to Meyers that he was shocked at how well-received the book has been. As Oliver told the late night host, “It’s getting ridiculous ... I just found out, I just got the latest figures this afternoon, it sold 180,000 copies so far, which is definitely more than we were prepared for.” In fact, Oliver told Meyers that all of the copies of the book that were initially printed are gone — but that many more are being printed and will be available this week.

Oliver also noted that the proceeds from his book sales are going to several different non-profit organizations. As Oliver told Meyers, "We're giving it [the proceeds] to The Trevor Project, who are a fantastic organization for at-risk LGBTQ youth, and to AIDS United, a wonderful HIV organization."

Meyers teased Oliver for making the "terrible mistake of giving away the money." In response, Oliver joked, “I’m sure HBO would find it absolutely hilarious they’re getting no money out of this."

Toward the end of the segment, the duo also discussed the parody book's audio book, which features the talents of a variety of notable entertainers and is being sold in addition to the hard copy. Indeed, according to Hillary Busis of Vanity Fair, "Jim Parsons, Jesse Tyler Ferguson, Jeff Garlin, Ellie Kemper, John Lithgow, Jack McBrayer, and RuPaul" were all enlisted for the project. Vanity Fair reported that sales of the audiobook are also quite impressive, as it is Audible's current number one best seller.

Oliver's parody book currently has a five star rating on Amazon, with over 3,000 reviews. Its popularity is perhaps due in no small part to Oliver's advocacy. According to MSN, last week on his show, he promoted the book and implored viewers to purchase it. “Let me be completely clear about this: This is actually a book for children. This is a real children’s book," Oliver stated. "Please, buy it for your children, buy it for any child you know, or just buy it because you know it would annoy Mike Pence ... You would be doing a nice thing in a really d*ckish way, and isn’t that the dream at the end of the day?"

More like this
Where Is John Leonard Now After Suing Pepsi For A Harrier Jet?
By Brad Witter
Robert Downey Jr.’s New Film Is A Tender Story of Fatherhood & Forgiveness
By El Hunt
How To Stream 'She Said' In The UK
By Maxine Harrison
Steve Banerjee's Wife Irene Sold The Chippendales Brand Prior To Her Death
By Brad Witter
Get Even More From Bustle — Sign Up For The Newsletter