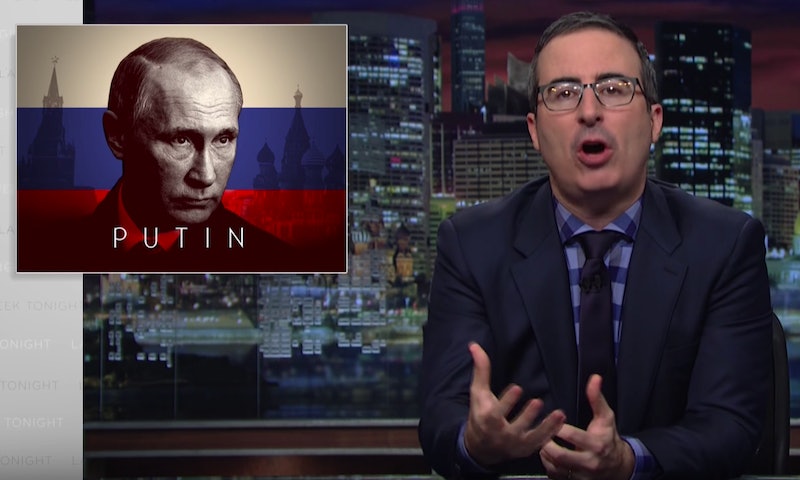 The main segment on Sunday's Last Week Tonight was on Vladimir Putin and Russia, "the country that gave the world Tetris, merkins you wear on your heads, and potentially the 45th president of the United States," as host, John Oliver said. In the wake of National Security Adviser Michael Flynn's departure from the administration, Oliver took a look at the country's larger connections to the Trump White House. Oliver acknowledged there's no "hard proof" of President Donald Trump having unsavory links to Russia. However, Oliver explained why Putin may not be the best partner for Trump, given what we know about the Russian leader.

Trump "has a weird, noticeably soft spot for both the country and its leader," Oliver said — and he spent the bulk of the episode dissecting it. Oliver dedicated a full 20 minutes on the topic. Trump as recently as Friday said at his press conference that it would be a good thing if Russia and the United States could get along — something Oliver said is not necessarily bad. It is remarkable, though, explained Oliver, saying "It's a bit weird that you've been objectively nicer to Vladimir Putin than you have to Meryl Streep."

So, if Trump continues down this bromance, buddy comedy plot with the Russian leader, you might need to know more about him. Oliver tries to break it down, something that's not easy given the disparity between how the Russian president presents himself and his actual record.

"I know over here we think of Putin as a cartoon character, who stages photo ops where he's shirtless on a horse, or swimming like a dolphin, or emerging from the sea like a Bond villain, or winning a staring contest with a baby chick, or quite possibly breaking a child's arm," Oliver said while flashing exactly those photos on screen.

"But in Russia, he's not a comic book villain, he's a comic book hero. He's genuinely popular there," Oliver continued. He went on to play a Russian pop song that's called, "A Man Like Putin," that is about how women want a man like Putin, something Oliver does see as questionable given that Putin is in his 60s, has thinning hair, and is about 5'5". "The man they want is essentially Richard Dreyfuss but mean," Oliver quipped.

As for those photo ops, they really have convinced many Russians that Putin is somehow special. Just before elections in 2011, Putin went diving and recovered ancient Greek vases, at least according to Russian state media, in what was played up as a remarkable find. Oliver sees it differently. "Not only is that clearly bull shit, but contrived seaside photos ops is the same publicity strategy as Taylor Swift and Tom Hiddleston. America had Hiddleswift while Russia got Putlejug. #Putlejug."

"Putin's popularity is all the more surprising given that his presidency has been shrouded in accusations of corruption," Oliver says, exploring the accusations that Putin's friends depend on him for their wealth. "That would actually explain how he once went out dressed like this," Oliver continued showing a picture of Putin in white denim jeans and a white denim jacket. "Any real friend would tell him, 'Vladimir, no, I love you, but you cannot pull off white denim.'"

Then there's Putin's personal wealth too, which, according to Oliver many estimate between $40 and $85 billion. That would make him one of the richest men in the world, something the Russian leader denies. (And yet he works out in a $3,000 tracksuit, Oliver wryly noted in the episode). "

Perhaps the meatiest part of the episode was Oliver pointing out the disastrous and sometimes lethal fates Putin's opponents have met. In 2015, leading Putin political opponent Boris Nemstov was shot dead; a former spy who turned on Putin, Alexander Litvinenko, was assassinated by radiation poisoning; and journalist Anna Politkovskaya was killed on Putin's birthday. One opponent who didn't die are poisoned repeatedly. Then, there are the relatively lucky ones who have been targeted with sex tapes that are shown on Russian TV or leaked online.

And yet there's plenty that we do know. Oliver goes on to argue, "He's annexed Crimea, imposed severe fines and prison terms on protestors, propped up the brutal Assad regime, and signed a harsh anti-gay propaganda law."

That doesn't sound like the best political counterpart to cozy up to. And yet Trump keeps saying that it would be great if we did. "Wouldn't it be great if we actually got along with Russia?" Trump has conveyed that sentiment time and again on the stump and now in the White House. What Oliver, ultimately, points out is Trump just doesn't seem to understand what being friends with Putin would entail.

More like this
Here’s How 'House Of The Dragon' Diverges From The Book’s Timeline
By Allyson Johnson
Everything To Know About 'And Just Like That...' Season 2
By Jack Irvin
The 'House Of The Dragon' Showrunners Revealed One Key Similarity With 'GoT'
By Grace Wehniainen and Kadin Burnett
The 'PLL: Original Sin' Season Finale Finally Revealed A’s Identity
By Alyssa Lapid and Kadin Burnett
Get Even More From Bustle — Sign Up For The Newsletter