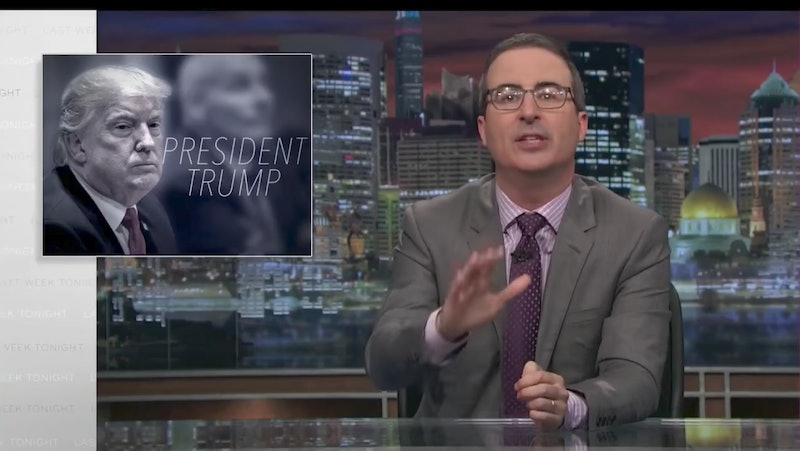 On Sunday's episode of Last Week Tonight, host John Oliver outlined the reported chaos that occurred in the White House this past week. Indeed, the late night host particularly highlighted the notion that Secretary of State Rex Tillerson reportedly called the president a "moron" earlier this year, with Oliver adding that Trump's recent "calm before the storm" comment — a foreboding and unexplained warning Trump issued whilst posing for a portrait with U.S. military leaders — reportedly proves that the president is "a moron."

Oliver opened his segment by recapping a recent NBC news story about Tillerson's relationship with Trump. The story, which was published on Oct. 4, noted that Tillerson reportedly called Trump a "moron" following a meeting at the Pentagon with members of the president's Cabinet and his national security team. NBC noted that Tillerson's comment was corroborated by three officials familiar with the incident.

As Oliver indicated, the State Department denied Tillerson ever called the president a moron, saying via a spokesperson that, "The secretary did not use that type of language to speak about the president of the United States." However, Tillerson himself would not directly address the allegation, saying, "I'm not going to deal with petty stuff like that ... That kind of petty nonsense — it is intended to do nothing but divide people."

Oliver then noted that this denial reportedly prompted NBC to issue what he called a "crucial clarification," saying that Tillerson had not called the president a "moron" but a "f***ing moron," which then led to an amusing television debate on MSNBC about which phrase Tillerson had allegedly used. Oliver appeared flabbergasted and amused after playing a clip of this debate, saying, "I mean, I guess this is just the type of discussion we now have on TV ... Did the secretary of state call the president a moron or a f***ing moron, because if it’s just moron, he’s a moderate."

The late night host then proceeded to indicate how worrisome Tillerson's alleged comments were, as Oliver believes they are indicative of instability in the Trump administration. Oliver noted that this instability is particularly concerning in light of Trump's recent aforementioned ominous comments about "the calm before the storm" during a photo opportunity with U.S. military officials and their spouses last week. Oliver played a clip of these comments, in which the president had the following exchange with the press pool observing the photo shoot:

Trump: Do you guys know what this represents?

Trump: Maybe it's the calm before the storm.

Trump: Could be the calm. The calm before the storm.

Oliver appeared aghast after playing the clip of the president's comments, expressing disbelief that Trump would make such seemingly foreboding remarks as well as noting that there is very little clarity about what the president actually meant when he spoke those words. Oliver took the president to task for his comments, exclaiming,

What are you talking about!? ... For a start, no moment in the preceding nine months has been even remotely calm ... Who knows what that means ... He could mean decertifying the Iran nuclear deal. It could mean launching all-out war with North Korea. It could mean a military strike on Puerto Rico ...

Oliver then continued and indicated that, in addition to the above-described options and many more, Trump's comments could also "mean nothing whatsoever because, and here I am directly quoting the secretary of state, ... our president is a f***ing moron."

Thus, Oliver clearly found Trump's words warning about the "calm before the storm" alarming and imprudent — and the late night host believes that they indeed embody the idea, reportedly first suggested by the secretary of state, that the president is a "moron."