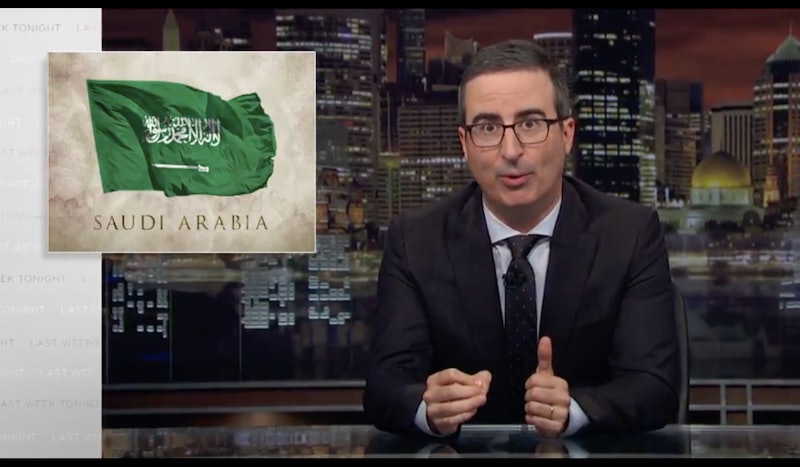 On Sunday's episode of Last Week Tonight, host John Oliver condemned Trump's Saudi Arabia deal following the mysterious disappearance of a journalist at the Saudi consulate in Istanbul, Turkey. Oliver criticized Trump's relationship with the Saudi monarchy, suggesting that the president is further deepening what Oliver believes is an already worryingly close relationship with Saudi Arabia.

Oliver's Saudi Arabia segment comes following the disappearance of Saudi journalist Jamal Khashoggi, who fled Saudi Arabia for the United States in 2017. As a journalist, Khashoggi has been highly critical of the Saudi royal family, including the heir apparent to the country's throne, Crown Prince Mohammad bin Salman. Khashoggi mysteriously disappeared on Oct. 2 after going to the Saudi consulate in Istanbul to obtain documents needed for his upcoming marriage. Turkish officials have suggested that, while in the consulate, Khashoggi was murdered by Saudi officials on the instruction of Saudi leadership. As The Guardian reported, Saudi Arabia has denied these allegations, saying that Khashoggi left the consulate alive.

On his show, Oliver suggested that, in light of Khashoggi's disappearance, the United States-Saudi Arabia relationship mandates a closer examination. The late-night host noted that, in the past, many American presidents have pandered to Saudi Arabia because of the regime's oil wealth, despite having concerns about human right issues in the country. However, Oliver believes that Trump's latest interactions with the Saudi monarchy are particularly worrisome.

"While the fact that the U.S. has enabled Saudi Arabia is nothing new, the extent to which Trump is prioritizing money over all else is really dangerous," Oliver said.

The late-night host cited Trump's exuberant advocacy for a $110 billion Saudi arms deal, even in the wake of Khashoggi's disappearance, as evidence for his claim. As CNN described, the U.S.-Saudi Arabia arms deal constitutes an agreement to have the Saudis purchase $110 billion in weaponry from the United States over the next 10 years.

To illustrate his point, Oliver played a recent clip of Trump speaking with reporters in the Oval Office. In the clip, the president noted that, while he didn't "like" hearing the news of Khashoggi's disappearance, "as to whether or not we should stop $110 billion from being spent in this country, knowing they [the Saudis] have ... four or five alternatives, that would not be acceptable to me."

Oliver chastised Trump for the message he believes the president is sending by seemingly remaining fully committed to the Saudi arms deal. "He's openly demonstrating to the entire world, and to Saudi Arabia specifically, that [an] arms deal [is] much more important than [a] butchered journalist," Oliver asserted. As CBS reported, Trump has claimed that he will ensure that "severe punishment" befalls Saudi Arabia if it is indeed found that Khashoggi was killed by Saudi officials. However, Oliver indicated that he does not believe the president's assertions, particularly because of Trump's seemingly close relationship with the country's Crown Prince, bin Salman.

The late-night host wrapped up his Saudi Arabia segment by warning that Trump's choices in regards to the Saudi arms deal could have significant consequences for the future of the United States and Saudi Arabia.

"Trump's intense bromance with MbS [Mohammad bin Salman] is bad news, because when you set no boundaries on an oppressive regime, they are always going to ask themselves, 'How much can we get away with here?'" Oliver said. "And, as we saw this week, the answer may well be to that, pretty much anything."