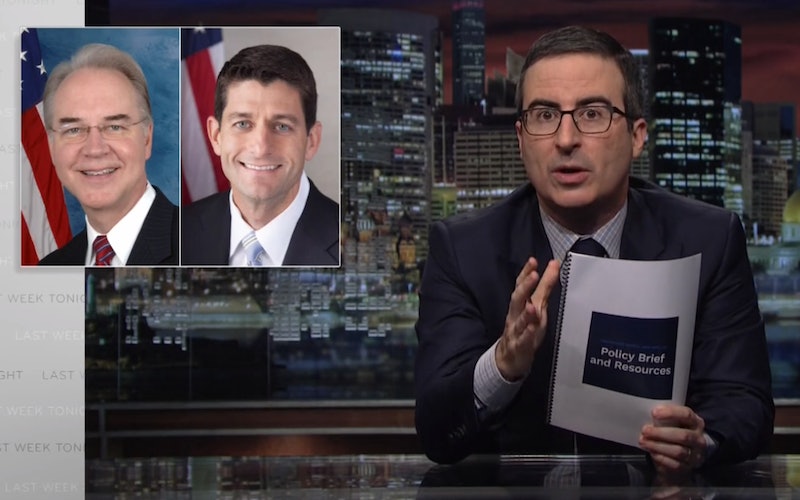 John Oliver compared the Republicans' healthcare replacement plans to a thong on Sunday's Last Week Tonight. And that might have been generous. You may already be able to guess, but one of Oliver's biggest slams of Reupblicans' healthcare replacement plans was coverage. That and how there is still no official GOP answer to the Affordable Care Act.

As Oliver noted, one version of the possible replacement bill has the word "placeholder" instead of an actual solution. The Dems mocked their lack of an answer, while Republican Rep. Susan Brooks tried to play it as a win: "This placeholder provides the clearest signal yet that we're working with patients and health care groups to draft language that balances important health statute protection with necessary risk mitigation tools," she told Congress. Oliver doesn't buy it:

Oh, please, if your spouse gave you a birthday card that said 'placeholder,' that would not be a signal they're working on the best language to express their feelings for you. It would signal they forgot your birthday because they're f*cking Sharon from The Office, and deep down I think you actually know that.

Oliver devoted the entire main segment of this week's show to healthcare in the United States — both the public's reaction to GOP moves to repeal Obamacare — and the Republicans' version of what's to come. That was where the biggest disses of the evening were heard. There are five main Republican ideas as for what's to come next, and none of them are good enough. They come from the talking points Paul Ryan gave Congress before recess.

Refundable tax credits are pretty much how Obamacare works. The difference with the Republican plan is that it wouldn't be based on income, but rather fixed to age. So as Oliver points out:

Theoretically 61-year-old billionaire Bill Gates would get a bigger subsidy than a 27-year-old making minimum wage — and gates clearly does not need that money. He'll just blow it on more $10 haircuts and orthopedic sweaters.

Plus they might be rather small — hence the thong joke referenced earlier. "A tax credit that small helps cover your health insurance the way a thong covers your dad's ass. It doesn't and there is something that's fundamentally wrong about that," Oliver jokes.

But some Republicans don't even like small tax credits. Another plan would be health savings accounts. They let you save money tax-free to pay for healthcare costs, as Republicans like you to spend your own money on everything — no government subsidies. Sen. Bill Cassidy compared it to him shopping at the mall with his own credit card versus when his daughter uses it, and how they buy different things. Oliver's take?

Setting aside that healthcare is nothing like shopping at the mall, shouldn't you come back with different purchases than your daughter regardless of whose credit card you have?

The "key problem" Oliver argues is that they're a tax shelter for rich people, but they're no good for poor people who can't save and anybody who spends more than was in their account. "You have that thong problem again," Oliver says.

"Designed to bore you," Oliver says, "because it combines block, a nothing shape, with Grant, your coworker's nothing boyfriend." But this is actually a dangerous Republican idea. Instead of committing to pay a percentage of states' Medicare and Medicaid spending, it would instead give them a set amount to do with as they please. It wouldn't increase over time, so eventually it wouldn't be enough.

Oliver summarizes, "If costs begin to rise and that block grant doesn't keep pace, it's that thong. Thong, th- thong, thong, thong." To put numbers to that, block grants are similar to a 2012 Paul Ryan plan, as many as 20 million people could be kicked off Medicaid rolls.

All the people with pre-existing conditions share a healthcare plan, while the healthy are covered separately for less money. That sounds good, but not if you've got a pre-existing condition! "Those pools are going to be incredibly expensive, which is fine if the government subsidizes them properly. But if it doesn't, that's right, it's thong o'clock," Oliver jokes. And guess what, the GOP won't.

Also worth understanding is that the GOP proposals do not address the individual mandate — the part of the law that requires everyone to get health insurance. Republicans have been railing against it, but there's no other way to keep the good stuff. One idea is a continuous coverage incentive that would punish you for gaps in coverage with higher premiums or denial of coverage.

Yes, you heard that right. Denial of coverage. But the GOP is not talking about this at all. That's what the "placeholder" bit of the proposed bill was about, potentially denying coverage. That would not play well with voters." But still, they need a plan. And the stakes are high. Trump has promised that everyone's going to be able to keep their doctor. "They can have their doctors, they can have their plans, they can have everything," Trump told 60 Minutes.

"They can have everything! Period!" Oliver repeats. "Anything short of that is a disaster, and insurers are going to need an answer soon, Republicans. So tick, tock, motherf*ckers. You don't get to placeholder your way out of this one again."

That sure sounds like a tough challenge. Especially because the GOP may need to start from scratch; Oliver already beat back these first proposals.