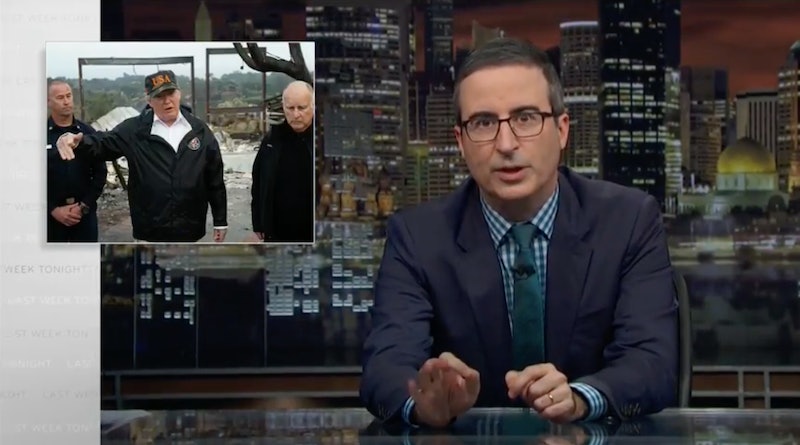 This year's final episode of Last Week Tonight aired on Sunday. In the season finale of his show, John Oliver lambasted Trump's California wildfires comments, condemning the remarks the president made as he toured the devastation across the state.

Oliver opened his show by asserting that Trump has "had a week of responding to things in a non-ideal" manner. The host went on to explain that, as he toured the damage caused by multiple deadly wildfires in California, Trump made some perhaps problematic remarks.

First, a reporter asked Trump whether seeing the wildfires' devastation firsthand had changed his opinion on climate change. Notably, Trump has frequently characterized climate change as either non-existent or unproven, despite much scientific evidence to the contrary. In response to the reporter's question, the president somewhat confusingly asserted, "No. No. I have a strong opinion. I want great climate and we're going to have that."

On his show, Oliver appeared shocked and confounded by the president's remarks about climate change. As the host put it:

'I want great climate.' At this point, Trump just inserts whatever noun someone just said into his stock bullsh*t answers. 'What's your opinion on SpongeBob SquarePants, Mr. President?' 'I want great SpongeBob and we're gonna have that. It's gonna be the spongiest Bob. And we love it, don't we? The pants that are square, we love them.'

The late night host then played another clip of Trump in California, in which the president was standing alongside the governor of the state as he discussed the destruction of the town of Paradise, California. Paradise was nearly completely razed by the state's wildfires — and at least 63 people were killed in and around the area, as CNBC reported. When reflecting on the impact of the fires on this community, Trump misidentified the name of the town until he was corrected by state officials. As Trump asserted:

You don't see what's going on until you come here. And what we saw at Pleasure, what a name right now. But what we just saw, we just left Pleasure. Or, Paradise ...

Oliver appeared absolutely aghast at the president's comments. "You have to remember the name!," the comedian asserted. "You were just there!" The late night host then added, "The most amazing part of that is not just the entirely predictable mistake, it's the face of the governor of California as it unfolds."

The comedian then replayed the clip of Trump misidentifying Paradise as "Pleasure" and, this time, zoomed in on California Governor Jerry Brown's face, which appeared to be furrowed in concern as Trump spoke. In reacting to this clip, Oliver noted:

It's certainly clear that Oliver believes that the comments Trump made as he examined the damage from California's wildfires were quite problematic. These remarks, coupled with some of the president's tweets about the wildfires, have certainly been quite controversial — and perhaps do not necessarily reflect the response many would expect in the wake of a natural disaster.