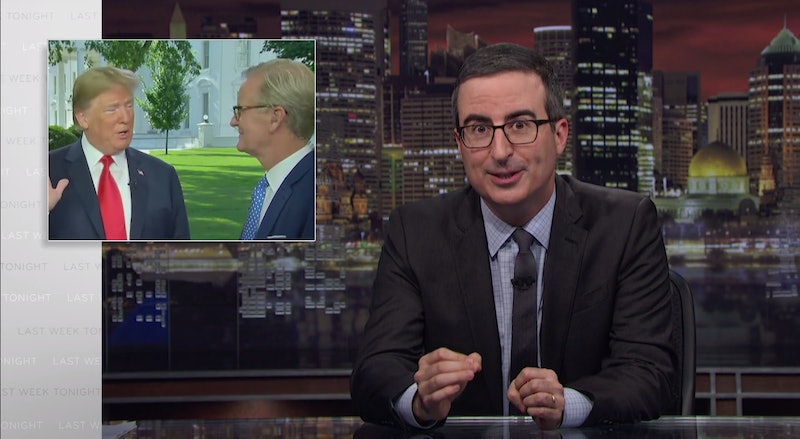 As Oliver explained, Trump has indicated that he "hates" the family separation policy and has blamed the policy on Democrats. The host played a CNN clip of Trump saying, "[The immigration laws] were given to us and forced upon us by the Democrats. The Democrats gave us the laws."

Oliver responded by pushing back strongly against Trump's assertion. As Oliver explained:

Democrats did not give them these laws, because, and I cannot stress this enough, there is no law that suddenly requires separating parents from their children. This was the result of a deliberate policy choice by Jeff Sessions.

With his "deliberate policy choice" reference, Oliver was referring to the notion that a recently-enacted zero tolerance immigration policy is driving family separation at the border. The Trump administration's zero tolerance policy mandates that all undocumented immigrants seeking entry into the United States are criminally prosecuted. As The Guardian explained, because undocumented parents crossing the border are now being charged with a crime (and their children are not), U.S. policy mandates that children and parents are detained separately. Thus, the Trump administration's decision to criminally prosecute all undocumented border crossers is producing rampant family separation.

Oliver then proceeded to condemn the Trump administration for seeking to use the Bible to defend the family separation policy. The host played a CNN clip of Attorney General Jeff Sessions quoting the Bible, seemingly to encourage acceptance of the policy. As Sessions said, "I would say, due to the apostle Paul and his clear and wise command in Romans 13, to obey the laws of the government because God has ordained the government for his purposes."

So, again, it's [the family separation policy] not a law. And, also, the Bible isn't a government document. From a policy perspective, he might as well be citing Green Eggs and Ham, saying, "We must keep children in a box. We must keep them with a fox."

Oliver also noted that Sessions' choice of Romans 13 to defend the family separation policy was not necessarily prudent, as the passage was also frequently used by slave owners in the Civil War era to justify slavery.

Finally, the late-night host also lambasted White House Press Secretary Sarah Huckabee Sanders for seemingly defending Sessions' use of the Bible to justify the family separation policy. Oliver played a clip in which Sanders asserted, "It is very biblical to enforce the law." Oliver appeared outraged by Sanders' comment, saying:

A: It's not a f*cking law! And B: Lots of things are said in the Bible, but that doesn't mean you should do them! At one point, the Bible demands that the head of government get 100 foreskins, but I don't think that Sanders is looking for Congress to gather together and start slicing d*cks.

Oliver concluded his segment by indicating that he believes that the Trump administration's use of the Bible to defend the family separation policy is hypocritical. The host implied that he thinks that President Trump himself has violated various aspects of the Bible's moral code and that, resultantly, his administration's use of the holy book to justify anything seemingly lacks sincerity. As Oliver put it, "You probably should't use the Bible to justify separating children from parents. But, if you do, maybe make sure that you're not already breaking so many of its rules that God has to write an extra commandment that says, 'I was f*cking serious.'"