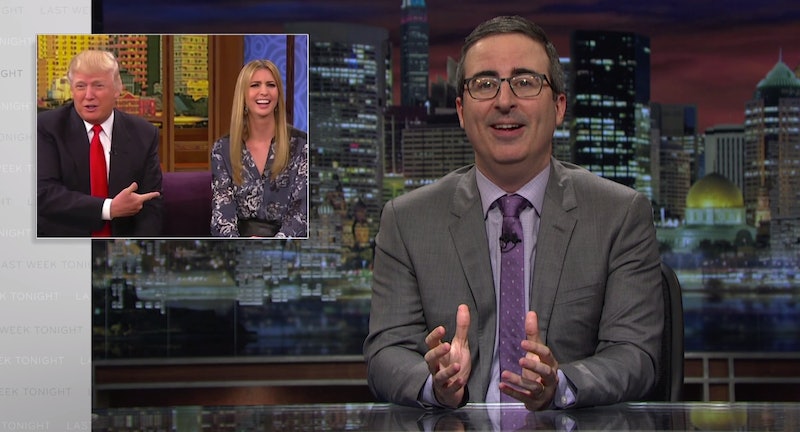 Trump's oldest daughter has been a controversial — and perplexing — figure within his Administration. While many believe that the fashion mogul is influential in shaping the administration's views on issues like climate change or family leave policy, she has been very careful not to disclose exactly what she believes, or what specific policies she and her father disagree upon. Luckily for you, John Oliver did some investigating. In this week's edition of Last Week Tonight, Oliver reveals an Ivanka Trump quote that gives America a better picture of what her motivations might be.

Ivanka, who now has an official White House office and an expanding role within the administration, has been seen as both a liberal-leaning voice of reason and a complicit figure in many of her father's controversial policies. While some have praised her alleged concern for comprehensive child care reform and women's rights, others, including Saturday Night Live, have criticized her for not speaking out against things like the president's proposed travel ban.

These conflicting opinions can largely be seen as the result of Ivanka's ambiguous language when speaking about her role in the administration. When confronted about this in an interview with Gayle King in April on CBS, Ivanka stated "I think most of the impact I have, over time most people will not actually know about."

"Oh, well that's convenient," Oliver responded in his segment on Ivanka and Jared Kushner on Sunday. "So we should just give her credit when good stuff happens and then blame others when bad stuff happens? That's not a job description of a political adviser, that's a description of an Old Testament God."

Oliver argued that Ivanka's "poised and restrained" demeanor is actually part of a calculated strategy to mislead the public — and he uses her own words to prove it.

"She's been trained in the art of Trump branding to be as vague and as likable as possible so that everyone can plausibly think that she shares their values, whether or not that's actually true," Oliver said.

Oliver pointed to an excerpt from Trump's 2009 book The Trump Card that seems to corroborate this.

"She's pretty much telling you to your face not to trust any assumption you're making about her," Oliver said.

While you still can't be sure exactly what Ivanka does believe in, Oliver has certainly given everyone a lot to think about the next time you see her make a public statement.