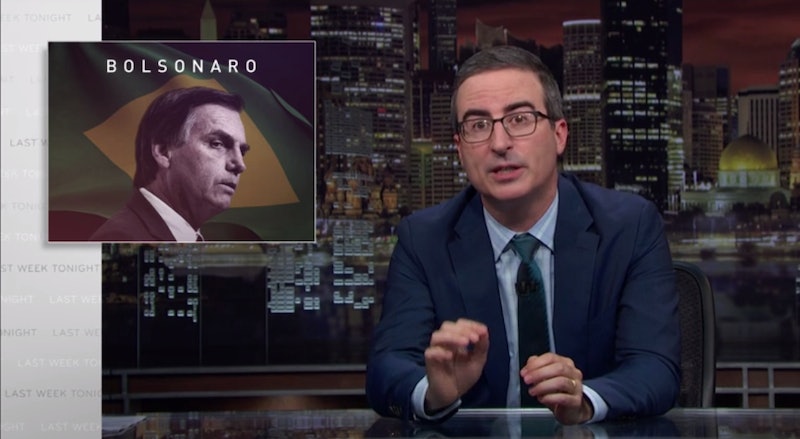 On Sunday, the host of Last Week Tonight took an in-depth look at Brazil's elections, as they were happening in real time. On the show, John Oliver warned that Brazil's Jair Bolsonaro, who has now secured victory in the first round of the elections, could potentially be quite dangerous for the future of the country.

Bolsonaro is a member of the Social Liberal Party, a right-wing Brazilian political party. As The Guardian reported, during the first round of Sunday's presidential election, Bolsonaro secured 46 percent of the total vote — just short of the majority needed to win the presidency outright. Bolsonaro will now head to a runoff presidential election on Oct. 28 against Fernando Haddad of the Workers' Party. Haddad won just 29 percent of the total vote on Sunday.

Oliver recorded his show before the election's outcome was announced, but noted that, regardless, he was concerned about the possibility of a Bolsonaro victory. Oliver opened his segment by characterizing the presidential candidate as a "terrible human being" and emphasized that many consider him to be misogynistic, homophobic, and racist, among other negative characterizations. The late-night host also reported that some refer to Bolsonaro as the "Brazilian Trump," which Oliver emphasized was "politically worrisome."

Oliver then played some clips to illustrate exactly why Bolsonaro has such a concerning reputation. In the first clip, the presidential candidate confronts a woman who is a member of Brazil's Congress, telling her (translated from Portuguese), "I would never rape you, because you're not worth it." When the woman replies that she would slap him in the face if he tried to rape her, Bolsonaro repeatedly tells her, "Do it, I'll slap you back." He then starts to push her away, shoving her chest with his hand.

The late-night host appeared shocked at the clip, saying,

Holy sh*t. He starts there with, "I'd never rape you 'cause you're not worth it," and then somehow tops that terrible statement. That's like saying, "Sorry kids, Christmas is canceled this year. Why? Because I murdered Santa Claus."

Oliver played additional clips to demonstrate Bolsonaro's homophobic rhetoric. In one clip, Bolsonaro suggests that if a child starts to become "a little gay" you "take a whip and you correct that behavior." In another clip, actress Ellen Page, who is interviewing Bolsonaro and informs him that she is gay, asks the presidential candidate if she should have been beaten as a child. In response, Bolsonaro says, "I'm not going to look at you and say, 'I think you're gay.' That doesn't matter to me ... If I were a cadet in the military academy and saw you on the street, I would whistle at you. Alright? You're very pretty."

In responding to this clip, Oliver was indignant as well, exclaiming, "What are you doing? You just told her, 'I wouldn't beat you, I would catcall you' — and seemed to genuinely think that was a compliment!"

The comedian wrapped up his segment by pleading with Brazilians. Without yet knowing the result of the first round presidential election, Oliver indicated that he was still hopeful if Bolsonaro wins the first round, but not the presidency outright (with the former ultimately occurring). The host implied that he believes this scenario allows time for Brazilians to decide who they truly wish to support — and emphasized that he does not think it should be Bolsonaro. As Oliver put it:

It isn't too late. That's the thing. And Brazil, please, look ... I realize you are disgusted with your politics at the moment and that you're not inspired by any of the alternatives. But anything is better than Bolsonaro ... Bolsonaro does not reflect the best of who you are, Brazil. And, with any luck, you still have a chance to vote "Ele Não - [not him]."

Time will soon tell whether or not Bolsonaro is ultimately elected president or defeated by Haddad when Brazilians head to the polls again on Oct. 28. You can be sure that Oliver — and many others —will be following the race closely.