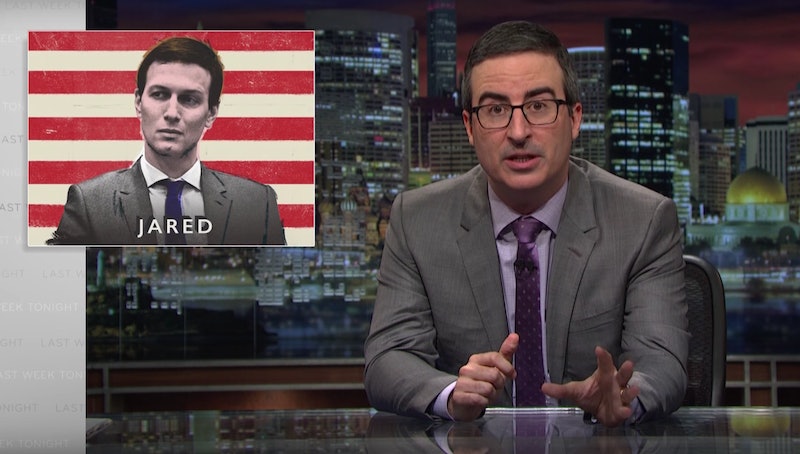 There is someone new helping to run the White House — yes, besides President Donald Trump. One name seems to keep popping up more and more frequently in Trumpland as a key figure in the administration, perhaps even edging out top adviser Steve Bannon. Sunday night on Last Week Tonight, John Oliver pointed out that Jared Kushner rarely speaks, while asking some very important questions about how qualified he is to be Trump's righthand man.

Oliver spent the main portion of his program speaking about Kushner and Ivanka Trump. Both she and Kushner have been credited as being good influences on Trump, except that there's no proof of that whatsoever. In Kushner's case, that's because we never really hear him say anything.

Cue Oliver who rolls tape on cable news pundits opining about how Kushner listens, but he doesn't talk that much. "He absorbs," one talking head said. Others equated him to Alexander Hamilton, or called him "super thoughtful." In essence, "three times listener, 0.5 percent talker." Not surprisingly, Oliver found that worrisome:

"0.5 percent talker" does point to something genuinely odd about Jared. Because for someone with the amount of power that he has, have you ever heard him speak? Seriously, what does his voice sound like? You don't know do you.

So to prove the point, Oliver found an old interview of Kushner talking about his family business and dubbed over the audio. Upon replaying it, Kushner's voice sounds like an irritated yet hilarious Gilbert Gottfried. "You don't know for a fact that that is not his real voice, and that is the real point," Oliver said, pointing out that being the strong, silent type does not automatically make you an intelligent type:

He's brilliant because he's quiet? Just because you don't talk does not necessarily mean you're thinking of something amazing. It can just mean you're sitting in a meeting staring blankly at people's moving lips thinking about why baby cats aren't called "cattens" or whether old goldfish might have peanut allergies but since they don't ever eat peanuts, we'll just never know.

Kushner, of course, has lots of responsibility in the Trump White House. He's been tasked with fixing the opioid crisis, reaching peace in the Middle East, and reforming the entire federal government. Another responsibility includes being the point of contact for 20-some countries.

"If you look at photos of Trump's meetings, it's like Where's Waldo?. He's in all of them," Oliver said pointing to meetings with Congress, business leaders, cyber security experts, a Saudi Prince, the Japanese prime minister, and even the Chinese president. "Where's the Kush? There he is, there's the Kush," Oliver joked. "Basically Jared is being invited to every important meeting or he died in the White House in the late 1800s and he's been haunting it ever since."

And that is essentially Trump's fault. He's the one who brought on his son in law, and Oliver doesn't completely take odds with this fact. "It is not unusual for powerful men to give their son-in-laws do-nothing jobs, but leave it to Donald Trump, who can't even get nepotism right, to give his a do-everything job," Oliver joked.

Kushner's jobs are many — and daunting. At a fundraiser, President Trump called out Kushner in the audience and said, "If you can't produce peace in the Middle East, nobody can." Oliver's take? "Okay, nobody can. Or I am wrong and future history books will say, 'And peace was finally brought to the Middle East by a sentient Kohl's mannequin who read a book once.'"

Regardless, Oliver doesn't care whether or not Kushner went to Harvard or is as intelligent as people claim. "Maybe Jared is single-handedly responsible for the entire victory. But that still doesn't mean he has the specific knowledge to tackle government reform, or the Middle East, or the Opioid epidemic," Oliver said, pointing out that basically anyone who's not Bannon gets a pass. "Jared Kushner is not Steve Bannon. That's true. But that is a low bar. That recommendation would get you no other job."

Oliver argued that if it were any other president relying on Kushner, you would be "justifiably" upset — and he's right. Trump shouldn't get away with this kind of thing, even if it does arguably keep him further away from the nuclear launch codes.

More like this
'The Undeclared War' Took Inspiration From This Gavin & Stacey Location
By Maxine Harrison
Police Shove 'Full House' Star Jodie Sweetin At An Abortion Rights Protest
By Radhika Menon
5 Ways To Stand In Solidarity With Women In America From The UK
By Sophie McEvoy
How To Fight For Reproductive Rights, Based On How Much Time You Have
By Courtney Young
Get Even More From Bustle — Sign Up For The Newsletter