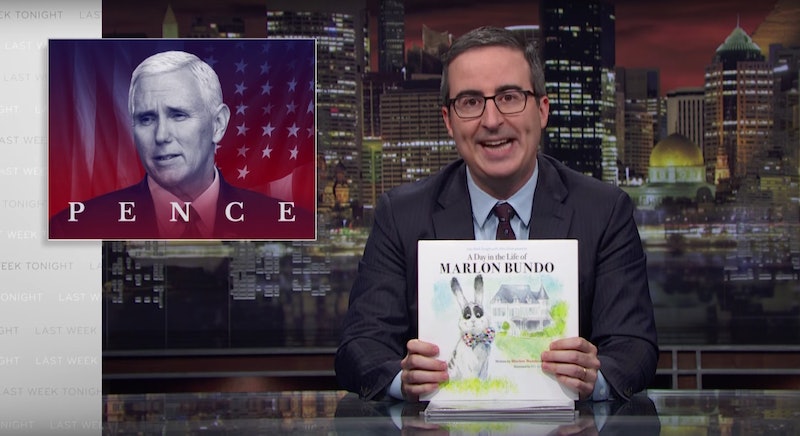 The Last Week Tonight host's skewering of Vice President Mike Pence is getting so extreme, it's going multimedia. A writer for John Oliver wrote a book about Pence's rabbit, Marlon Bundo. Called A Day in the Life of Marlon Bundo, the book is meant to make fun of Pence and his views on LGBTQ rights.

The description of the book, which is actually for sale, reads that it's about a "very Special boy bunny who falls in love with another boy bunny." The book is in addition to a 20-minute segment dedicated to the vice president on Last Week Tonight.

Oliver skewered Pence in the segment, focusing in large part on his conservative social views, noting in particular his "hostility to LGBT rights." That's why he and his team are releasing the book, which pokes fun not just at Pence's social views but also spoofs a book that was written by his daughter and illustrated by his wife.

His wife and daughter just released a similarly titled picture book called Marlon Bundo’s A Day of the Life of the Vice President. The book is about a pet rabbit at the White House. Oliver's book is a parody on the title. And just to be clear, the Pences' rabbit does exist — just check out its Instagram.

"It turns out, in a complete coincidence, we also wrote a book about Mike Pence’s rabbit that has also been published,” Oliver said Sunday. “In fact, while his is out tomorrow, ours is released right now."

"There are a few small differences between the books," Oliver said. "Our story is about Marlon Bundo falling in love with another boy rabbit because our Marlon Bundo is gay, just like the real Marlon Bundo."

Oliver previewed the book with a short cartoon of Marlon the bunny decked out in a colorful bowtie meeting another boy rabbit and falling in love. They decide to get married until the "evil stink bug" — clearly based on Pence — comes and tries to tell them they're not able to. You have to buy the book to know how it ends.

No matter where you buy the book, the proceeds go to The Trevor Project, which helps support at-risk LGBTQ youth with suicide prevention and crisis intervention services, and AIDS United, which works to end the transmission of HIV in the United States.

Oliver said that gives you three good reasons to buy the book. The charities are "two great reasons to buy this book," Oliver argued. "Another is that selling more books than Pence will probably really piss him off."

"Let me be completely clear about this," Oliver added. "This is actually a book for children, this is a real children's book. This isn't some adult book telling Mike Pence to go f*ck himself, although in buying it, that's exactly what you would be doing."

To find your copy, go to www.betterbundobook.com. "Because do you want the regular Bundo book, or the better Bundo book?" Oliver said.

"Please buy it for your children," Oliver said. "Buy it for any child you know, or just buy it because you know it would annoy Mike Pence. You'd be doing a nice thing in a really d*ckish way. And isn't that the dream at the end of the day?"

The book was in fact made available on Amazon Sunday. Already it's rated as the number one seller of all books on the website and has a five-star rating with 607 reviews as of Monday morning.

More like this
Robert Downey Jr.’s New Film Is A Tender Story of Fatherhood & Forgiveness
By El Hunt
‘The Mosquito Coast’ Book Ending Includes A Major Character’s Death
By Brad Witter
Everything To Know About The 'Daisy Jones & The Six' TV Series
By Maxine Harrison
In Pop Culture, Female Journalists Are Finally The Main Character
By Jenny Singer
Get Even More From Bustle — Sign Up For The Newsletter