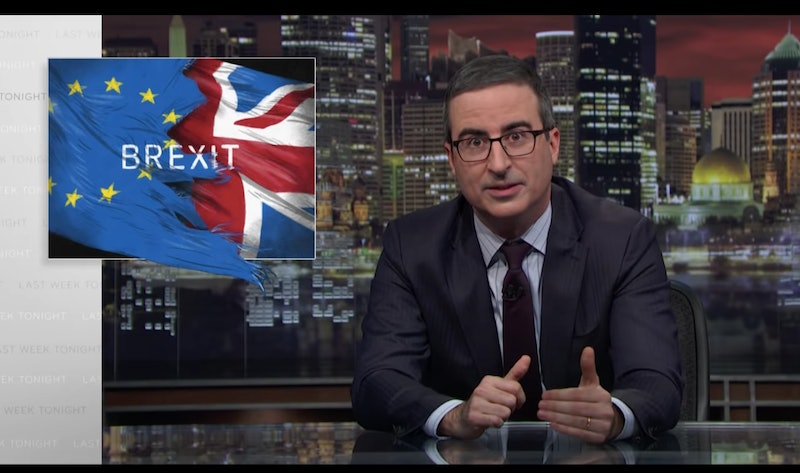 Last Week Tonight revisited a familiar topic during its Season 6 premiere on Sunday night. Host John Oliver's Brexit segment addressed key questions as the United Kingdom approaches its March 29 deadline to leave the European Union. Oliver also shared his concerns about Brexit's implications for the UK's citizens and beyond.

In opening his segment, Oliver said he wanted to address three main topics: Why people don't like Prime Minister Theresa May's Brexit deal, what will happen if the UK exits the EU without a deal in place, and whether it's still possible for the UK to back out of Brexit.

In answering the first question, Oliver noted that May has spent the past two years carving out a transition deal to allow for the UK's gradual exit from the EU. However, this deal was rejected in Parliament on Jan. 15. The late night host noted that, among other reasons, many don't like May's deal because of how it addresses the issue of the border between Ireland and Northern Ireland.

As the comedian described, Ireland and Northern Ireland have a long history of conflict. Since Northern Ireland is part of the United Kingdom and Ireland isn't, Brexit technically mandates that a hard border should be re-established between the two countries once the UK leaves the EU. However, as Oliver noted, nearly all experts agree that a hard border is a bad idea due to the countries' history of violent border clashes. Experts haven't really figured out a way to successfully address the border issue.

As a result, Oliver noted that May's plan contains a provision called a backstop that would essentially allow Northern Ireland to "broadly live under EU rules and there would be a hard border between it and the rest of the UK." The host noted that, if approved, this backstop agreement would remain in place until a final border deal is reached. However, Oliver pointed out that many officials don't like the backstop idea and rejected May's plan because they want her to renegotiate the Northern Ireland-Ireland issue with the EU. The host indicated that the EU has said it's finished negotiating, though, which means it's possible the UK could now leave the EU without a deal in place.

If the UK does indeed leave the EU without an exit deal, Oliver warned of dire consequences. The host noted that there will suddenly be customs checks on formerly open borders, which would significantly slow down trade and commerce. Indeed, Oliver revealed that, if a deal isn't reached, there could be a shortage of key goods, like medication, in the UK. He added that having a "no deal" exit would also likely have longterm negative effects on the UK's economy.

Oliver wrapped up his segment by reflecting on whether the UK could change its mind about leaving the EU. As the host noted, the country actually can reverse its decision up until March 29, following a Court of Justice of the European Union ruling. However, Oliver believes it's quite unlikely that the UK will do so, saying that there'd be too much "political backlash for defying the popular will."

Nonetheless, the comedian said he thinks that the UK's leaders need to make a "courageous decision" and decide to remain in the EU because of the significant risks associated with an exit. "A true act of political courage at this point ... would be to acknowledge that the first one [EU exit referendum] was fatally flawed," Oliver said. "[Courage means acknowledging] ... that carrying it [Brexit] out will do longterm damage to the country and then cancelling Brexit altogether."