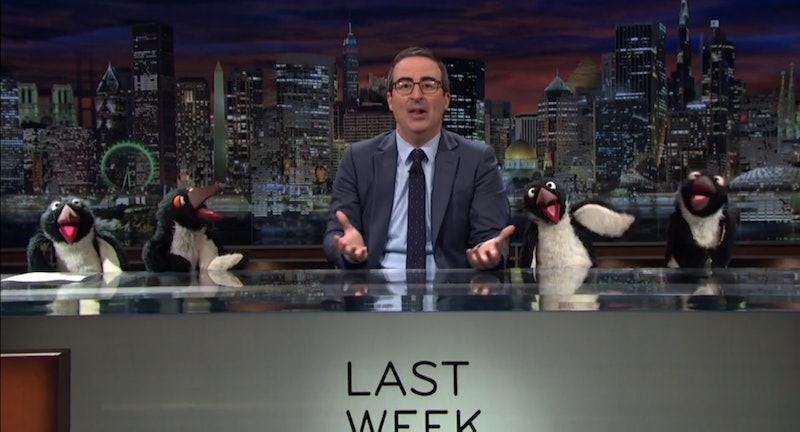 The news is even getting to John Oliver. The ever funny man admitted Sunday that it has been getting harder and harder to keep up with the "exhausting pace" of news under the Trump Administration. "Look, I don't know about you, but this week has drained me," Oliver said. But luckily for the Last Week Tonight host, there's a perfect way to combat this feeling. At the end of the show there was a great surprise for every stressed-out American when Oliver had dancing penguins help relieve stress from all the ridiculous, never-ending news coming from the White House.

It's important to point out that the news has been so intense that even the show was taken over by last week's events — everything about Trump from commencement speeches to impeachment calls — as opposed to focusing on a specific topic. The opening segment therefore lasted a whole 24 minutes of the 30-minute show. Thus Oliver explained, "We have a bit of a problem. You may have noticed that Trump has completely decimated this week. Unfortunately in doing that, he's essentially destroyed our plans for this show." Oliver was planning to do a segment on the TSA, but with just three minutes left it proves impossible.

He races through all the things he was planning on for the "deep dive on a boring topic" before Trump made the week so exciting (in a bad way). "There is clearly not time left for me to do it properly. But I will not be defeated," Oliver says before flashing charts and clips on the screen at a million miles an hour. "I'm going to give you a full Last Week Tonight story that should take 20 minutes in just 3 minutes."

He skips over nearly the entire argument but does share a few things that he planned to include including a Sesame Street clip of dancing muppet penguins singing "1, 2, 3, 4" with Feist. "Believe me, that actually made sense in the context of our piece," Oliver explained. "Broadly speaking penguins are a flightless bird so in theory if they wanted to go somewhere, they might have to deal with the TSA. You can imagine the kind of fun graphics we had planned."

But it's at the very end of the show when Oliver reaches the best part. Yes, dancing muppet penguins, which almost got cut with the TSA piece. "Just to cheer everyone up at the end of a long and sporadically depressing show, we were going to give you something joyful and fun to watch, and it was the penguins!"

"The penguins were going to cheer us up, and I guess they still can!" Oliver exclaims as the penguins appear on the set, joining him at his desk. "Look, it's just nice! That's all it is. Things are allowed to be nice." So if you feel like Oliver did, try tuning into some dancing muppet penguin footage. It really does help, especially when they laugh.

More like this
'Waterloo Road' Is Back, With More Than A Few Familiar Faces
By Sam Ramsden and Vivian Iroanya
Prince William Condemns “Unacceptable” Comments Made To A Black Guest At Buckingham Palace
By Shahed Ezaydi
Matt Hancock Broke a Major Rule With I’m A Celeb
By El Hunt
Keke Palmer Just Announced She's "Going To Be A Mom" On 'SNL'
By Brad Witter
Get Even More From Bustle — Sign Up For The Newsletter