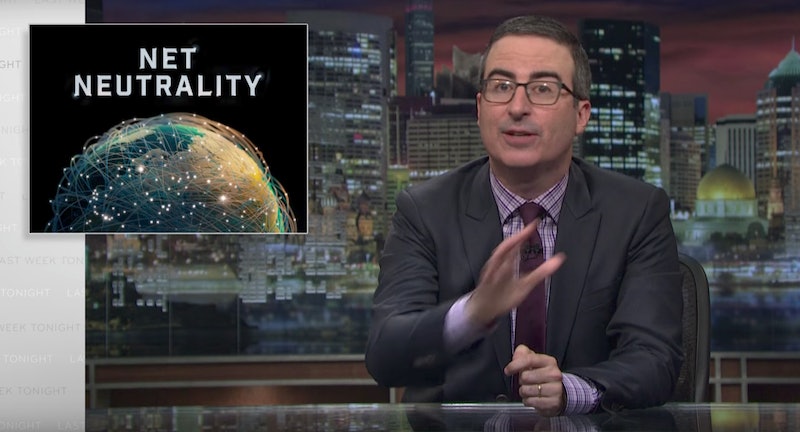 Back in 2014, John Oliver went up to bat against the Federal Communications Commission for not doing enough to protect net neutrality — and won. So can he do it again this year? Oliver spent the majority of Sunday's episode of Last Week Tonight going over the new problems with net neutrality. It seemed to be resolved under Obama, but Oliver argued that now the Trump Administration is trying to "ctrl-Z" the last eight years. But not if Oliver can help it. Oliver touted his "Go FCC Yourself" link, which quickly crashed the FCC website.

Just in case you're not already up on the internet lingo, net neutrality is the policy that any information you try to get online, be it a website, Netflix, or YouTube video of goats singing Taylor Swift (which Oliver played), be treated equally. It cannot be blocked or slowed down by your internet service provider. Only the government can ensure such a policy, and that's why Trump's FCC new chairman, a former lawyer for Verizon, is so troubling. Chairman Ajit Pai wrote a letter after his appointment noting that dismantling net neutrality is his number one goal.

So leave it to Oliver to come up with a solution. He thinks contacting the FCC, just like in 2014, could be the best way. And he's made it extremely easy for you. He bought GoFCCYourself.com and redirected it to the comments section on net neutrality. And so far, it's working. Shortly after his show was broadcast, the FCC website crashed completely. By early Monday morning, the main site was back up, but the comments page for the net neutrality comments still wouldn't load.

In the last 30 days, nearly 35,000 people have commented on the net neutrality rules — by far the most popular issue being debated at the FCC. The second-most popular is also on protecting the open internet, with some 8,000 comments. In third place? An issue on interstate marketplaces with just 135 comments as of the time of publication.

Oliver is really committed to the issue, especially because if companies had to pay their way to reach you on the internet, only big companies would succeed because new startups would have no way of breaking into the market. He gave the example of Ancestry.com vs. a website Oliver supposedly created, JustTellMeIfImRelatedToANazi.com. It also redirects to the same FCC webpage on net neutrality.

Oliver's bringing attention to the issue might be enough to save it, but there's no way to know, especially considering the way Pai likes to put a fun spin on deregulation. One way? He brings an abnormally large Reese's Peanut Butter Cup coffee mug to press conferences, something that truly irked Oliver. But beyond that is his push to repeal the finding that the internet and its service providers are common carriers — in need of tougher legislation.

As Oliver points out, the only solution is to stand up to the FCC as citizens concerned about the internet. "I’m calling on all of you, the internet time-wasters and troublemakers, to join me in just 5-10 minutes of minor effort. I need you to do this. Once more unto the breach, dear friends," Oliver asks. Well, given that the FCC's site crashed, it seems you're heeding his call.

More like this
All The Clues About Aly & Zach’s Relationship Status After 'The Bachelor'
By Brad Witter
Why Did Brianna Leave ‘The Bachelor’?
By Grace Wehniainen
All The Clues Kaity & Zach Are Together After ‘The Bachelor’
By Grace Wehniainen
Zach Explained Why He Had To Send Bailey Home Early On 'The Bachelor'
By Brad Witter
Get Even More From Bustle — Sign Up For The Newsletter
From hair trends to relationship advice, our daily newsletter has everything you need to sound like a person who’s on TikTok, even if you aren’t.