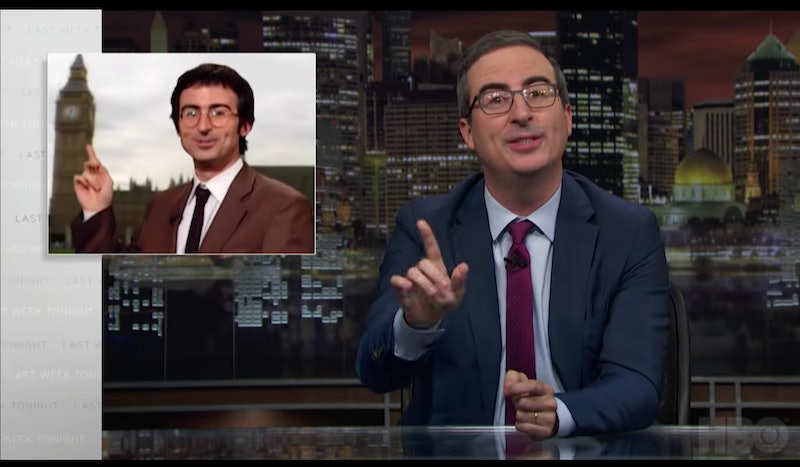 Last Week Tonight is set to return from its three-month hiatus on Feb. 17 — and, in the meantime, the show is poking a bit of fun at itself. Notably, John Oliver's Last Week Tonight 2019 trailer jokes about the show's five year anniversary. The video features a compilation of clips from previous shows and mockingly notes, "Somehow this has lasted five years."

Last Week Tonight's Season 6 trailer initially aired on Jan. 18. Since then, the show has been featuring the trailer on its Twitter account in the lead-up to the new season's premiere. Most recently — on Feb. 10 — the show shared a snippet of the trailer along with the caption, "Our new season starts on February 17th. So get ready for more of ... whatever this is ... "

After questioning how it has been on air for five years, the trailer then featured an old clip of Oliver discussing immigration on his show. "Our main story tonight concerns immigration," the late night host noted. "A system that brought you me, but, it's still good and I promise that won't happen again," Oliver joked.

The trailer also included other memorable moments from past shows as well. For example, in another clip, Oliver announced, "Last month, some idiot paid $106 for possibly the largest Raisin Bran flakes in the world."

The host then pulled out a glass display box containing several Raisin Bran flakes and added, "And, let me just say, that idiot is very happy with his purchase."

The Season 6 trailer continued with its theme of poking fun at itself by taking a look back at Oliver's interview with late physicist Stephen Hawking. During this interview, Oliver said to Hawking, "You believe there could be an infinite number of parallel universes. Does that mean that there is a universe where I am smarter than you?" In response, Hawking asserted, "Yes. And also a universe where you're funny."

Critics' reviews of Last Week Tonight were also interspersed throughout the trailer. Some were very praiseworthy, like that from Rolling Stone, which characterized it as "TV's smartest, sanest show." However, others were quite critical, with the trailer noting that Piers Morgan once called Oliver "shameless" and The Spectator once referred to the show as "wickedly offensive."

Ahead of Last Week Tonight's return, Oliver sat down for an interview with The Vulture on Feb. 7, in which he reflected on why his show may appeal to viewers. The host emphasized that he doesn't fundamentally know what draws audiences to watch Last Week Tonight, but indicated that he thinks that people trust that the show will reflect on unique and well-researched topics. As Oliver told The Vulture:

... In terms of what’s appealing watching it, I don’t know ... What we try to do is show something [viewers] haven’t seen before, or show people elements of a story they haven’t seen before. So I hope that would be a reason to watch it. But also, we are incredibly diligent over fact-checking ... I hope there is an element of trust that people have that we’re not passing on any information lazily.

As the show's 2019 trailer suggests, Last Week Tonight clearly isn't afraid to push boundaries and even make fun of itself in its pursuit of creating enjoyable and informative political comedy. Surely, fans of the show are counting down the days until Oliver will reappear on their screens and once again offer his unique take on world affairs.