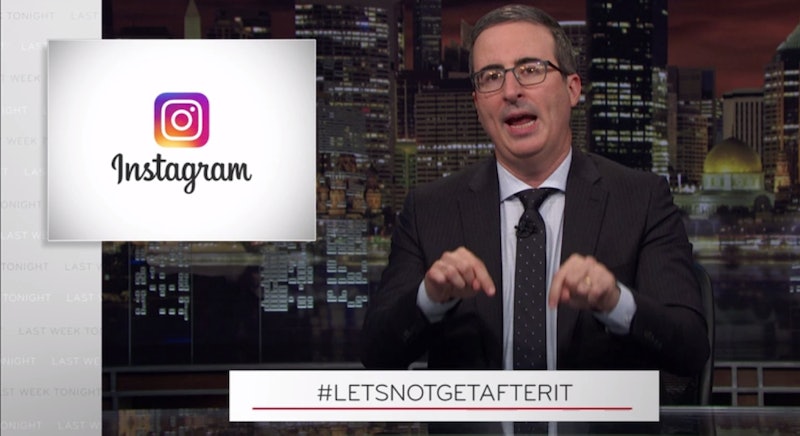 On Sunday's episode of Last Week Tonight, host John Oliver started a "Let's Not Get After It," challenge, asking fans to share their experiences of not successfully accomplishing tasks. Oliver's new social media challenge was developed partially as a counter to CNN host Chris Cuomo's Instagram account, which frequently features exuberant videos accompanied by the hashtag "#LetsGetAfterIt."

As Oliver explained, looking at Cuomo's Instagram account, as well as those of other TV news hosts, inspired him to harness the power of social media in his own way. As the comedian put it,

This has actually inspired me. I'm kind of on TV. I should be using Instagram. But instead of a Chris Cuomo-style account, which just makes you feel sh*tty about your physical fitness ... I'm going to capture the hearts and minds of people who do not want to "get after it" in any shape or form because they're tired. This is why I'm kicking off the Last Week Tonight #LetsNotGetAfterIt challenge.

The host further noted that, in order to participate in the challenge, viewers should simply post a photograph or video of themselves "functioning totally age appropriately" and then use the #LetsNotGetAfterIt hashtag to join the campaign. Oliver kicked off the campaign with a few of his own videos. One video features the host getting slightly winded after climbing a "medium number of stairs." Another clip shows Oliver struggling to open a jar of food before handing it to someone else who then succeeds at opening it.

A third #LetsNotGetAfterIt video indirectly mocks the Instagram account of another television news host, Mika Brzezinski. In this video, Oliver simply refuses to pick up a pig because "the pig doesn't like it." In his video, Oliver is doing the exact opposite of Brzezinski in several of her old Instagram posts. In Brzezinski's posts, which Oliver played earlier on his show, the Morning Joe host is seen repeatedly picking up her pet pigs, a move that is typically accompanied by excessive squealing from the animals. When Oliver shared Brzezinski's original posts, he appeared shocked at the pigs' reactions to Brzezinski holding them, repeatedly exclaiming, "Put the pig down! Put the pig down!"

It seems that some viewers have already taken Oliver up on his challenge. Amy Kuperinsky, a writer for the Star-Ledger, tweeted that "John Oliver was spot-on on Chris Cuomo tonight." She then shared her own contribution to the "Let's Not Get After It" campaign, tweeting a photograph of her tea and writing, "This is ginger tea and it’s my only accomplishment right now." Others on Twitter shared videos of themselves engaged in similarly mundane tasks, including typing at a computer, resting in bed, or cuddling with their pets.

Viewers' already exuberant interest in his new campaign is likely quite pleasing to Oliver, who closed out his segment by saying, "I challenge you, the viewers, to take to Instagram and 'get after it' only as much as is comfortable and appropriate for you." The late night host will surely be watching with anticipation as more and more viewers take on the seemingly anti-challenge challenge.