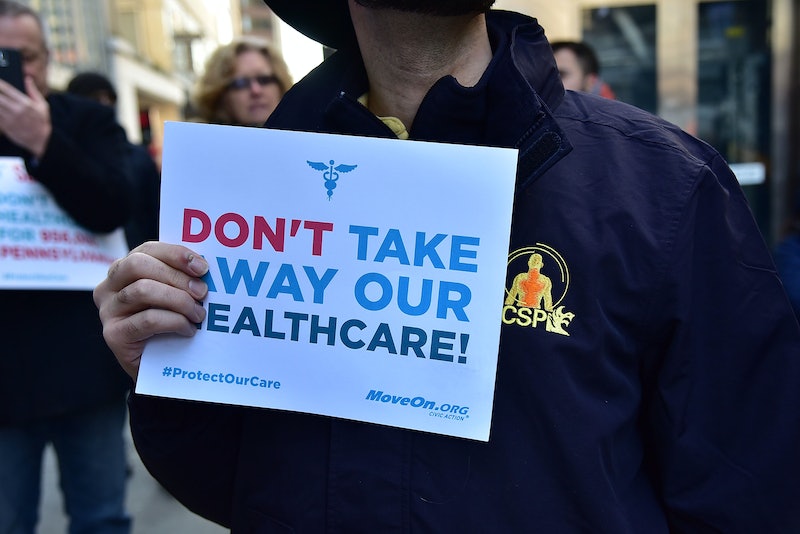 You know how the Republicans in Congress have been trying to repeal the Affordable Care Act for ages? And now that they actually have the chance to do it, they seem to have no replacement in place? Yeah, well your favorite late night host has noticed it too. John Oliver's Obamacare segment took the talking points that make up the current Republican plan to replace the groundbreaking healthcare legislation and absolutely ripped them to shreds. Although, as he pointed out, the people speaking out at those town hall events already seem to understand things pretty well.

He starts things out by rehashing their complaints from around the time it was getting passed — according to some, it was "the worst piece of legislation ever passed" (which, Oliver notes, definitely gets the Fugitive Slave Act off the hook). The segment goes on to say that no matter how much complaining they've done, they still haven't actually managed to put forward a replacement that would guarantee the same levels of coverage. Their proposed legislation, Oliver points out, even includes the word "placeholder" instead of an explanation of their plan.

Paul Ryan did, however, distribute some talking points for his colleagues to take into their wild town halls — and this is where Oliver really takes off.

The first of these talking points are the refundable tax credits that Ryan promises, which Oliver explains as "free money to help pay your premiums." The problem? The subsidies will almost certainly be too small for the people who really need them, which results in less coverage.

Next are healthcare savings accounts, or in Oliver's words, "tax free accounts where you can save money to help pay for healthcare costs" or "very fancy piggybanks." But again, the problem? They really help rich people, who get a tax-free nook for their money, but you get no help if you're too poor to save or if you get sick and have to use all of the money that you've saved. Again — less coverage for the most vulnerable people.

The third are block grants, through which the federal government would send money to the states to cover healthcare costs. A pretty predictable problem shows up here too, though. If the money in the block grants can't keep up with what's needed, then people lose coverage. How many people, exactly? In a plan that Paul Ryan proposed, 20.5 million people would lose their Medicaid coverage over 10 years.

The final major talking point are the high risk pools, which would theoretically put all of the sickest people into the same insurance pools, thereby lowering the costs for everyone else. This would work, Oliver says, if the government would pony up the right amount of money to cover the people who need it. The amount they're suggesting putting towards these pools, however, is less than one percent of what would be needed. And so, of course, what's the problem? Tons of people would lose coverage.

The end result? The metaphor that Oliver chooses to give us for what the nebulous Republican Obamacare replacement would cover is your dad wearing a thong. What would it cover? According to Oliver, "It doesn’t and there's something fundamentally wrong about that."

With that particularly unsavory image, Oliver completely captured the Republican approach to replacing the Affordable Care Act, and grossed everyone out in the meantime. But when it's something this serious, I definitely agree with Oliver — it's totally worth doing.