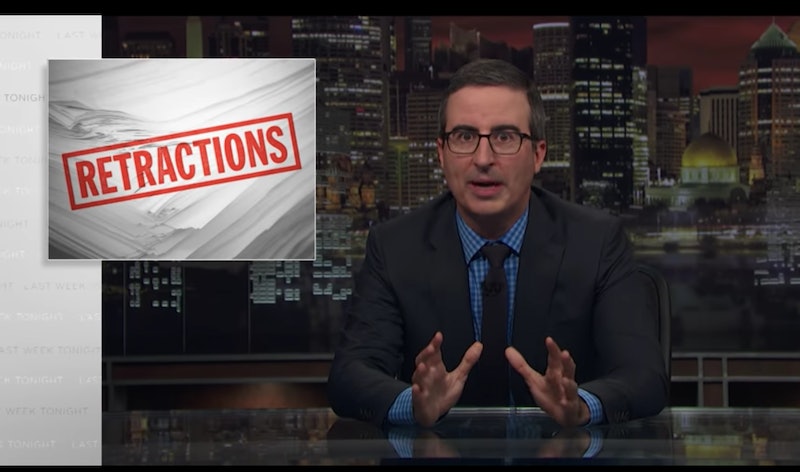 Last Week Tonight did not air a new episode on Sunday evening. However, that doesn't mean its host stayed out of the spotlight completely. Indeed, on YouTube, John Oliver's "retractions" video corrected some of his most ridiculous assertions, with equally hilarious results.

Oliver opened his web exclusive video by explaining that he wanted to "take a moment here, on the internet, to set some things straight." He indicated that, at Last Week Tonight, he and his staff work to ensure that everything he says on-air is accurate, but, sometimes, "occasional errors do slip through." The late night host then noted that "in the interest of full transparency" he wanted to retract some claims he made in the past that ended up being false.

The host continued with his first retraction, which centered around the state of Alaska. As Oliver hilariously noted, he wanted to correct a statement in which he asserted that the United States bought Alaska from grizzly bears for 50 pounds of salmon. Oliver joked that that claim was "unexpectedly false," adding that, in reality, Alaska was purchased from the Russian Empire in 1867.

Oliver's next retraction related to MySpace, with the host noting he had recently said that "MySpace is back baby, it's Tom Time, motherf***ers!," referring to Tom Anderson, one of MySpace's co-founders. The host then remorsefully noted that his research staff had discovered that MySpace is not actually making a comeback and said, "It is my sad duty to inform you that it is not now, nor was it ever, 'Tom Time, mother***ers.'" The host also added that MySpace still technically exists, but it "remains an internet graveyard populated by ska bands that broke up seven years ago."

The host's next two retractions related to trains and potato chips. First, Oliver apologized for referring to trains as "buses that f*ck." Oliver noted he should've been more accurate, since trains are "actually airplanes that pee sitting down." Oliver then apologized for a claim he made that blue-hued potato chips were made from sliced Grover arms (referring to a popular character on Sesame Street). The host noted that a recent "exposé" revealed that the chips aren't made from Grover's arms, but instead from thin shavings of Barney the Dinosaur's genitals. The comedian then apologized to Grover's family for "any confusion" his earlier report may have caused.

Finally, Oliver wrapped up his retractions by apologizing for referring to a collection of six seemingly random fish (whose pictures he showed onscreen) as "idiots, morons, dimwits, boneheads, dunces, and doofuses." He then asserted that he wanted to apologize to the "entire fish community," but only for "not going further" with his remarks. As the late night host assertively told the "fish community," "That's right, you slimy dipsh*ts, I retract my retraction! I hope all of you end up in a f*cking chowder!"

With his hilarious "retractions" wrapped up, Oliver promised viewers he would be more thorough and accurate in the future. If you wish to see whether or not Oliver sticks to his word, you can tune in to Last Week Tonight when it returns to television on Sept. 9.