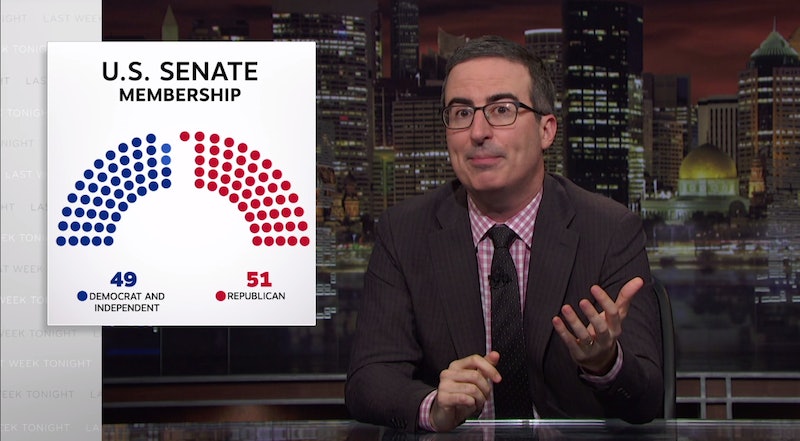 Sunday's episode of Last Week Tonight opened with a segment on the Supreme Court and the recently-announced retirement of one of its nine justices — something which could impact the legal trajectory of the United States for many years to come. Indeed, host John Oliver's segment on Anthony Kennedy's SCOTUS retirement laid bare the potential negative ramifications of having a conservative-dominated court and emphasized that perhaps not much can be done to avoid this outcome.

Oliver opened his Supreme Court segment by characterizing Kennedy's retirement as "bad" for "anyone who believes that the Constitution protects things like reproductive and LGBT rights." He also further emphasized that people should recognize that the announcement of Kennedy's retirement is "bad, because Donald Trump Jr. was happy about it." As the late night host described, on June 27, Trump Jr. tweeted, "OMG! Just when you thought this week couldn't get more lit... I give you Anthony Kennedy's retirement from #SCOTUS."

The host mocked Trump Jr.'s reaction to Kennedy's announcement while also emphasizing his own concern about the future of the Supreme Court and the United States. As Oliver put it:

I'm afraid I'm going to have to disagree with Mr. Jr. on this. Because I personally don't think this was lit at all. I mean, it's obvs cray AF. No one is defying that fam. I would argue that this week's news was neither lit, nor on fleek, nor was it three fire emojis ...

Oliver then noted that Trump has developed a list of potential nominees to replace Kennedy with the help of the Federalist Society, a conservative group of lawyers. He also added that, due to their concerns about who Trump will nominate and how it will affect U.S. laws and policies, Democrats are seeking to find ways to thwart Trump's nomination of a justice — to little avail.

Indeed, the late night host pointed out that Democrats have sought to appeal to "[Senate Majority Leader] Mitch McConnell's sense of fairness and consistency by pointing out that he refused to confirm Merrick Garland before a major election." However, as Oliver noted, "the problem there is that McConnell couldn't give a flying f*** about fairness or consistency."

Thus, Oliver said, some Democrats have now moved on to "Plan B," which involves arguing that, because Trump is the subject of an ongoing special counsel investigation, he should not be allowed to nominate a justice until the investigation is complete.

However, as Oliver put it, it doesn't really matter whether or not that argument has merit, because Republicans only need 51 Senate votes to confirm Trump's nominee to the Supreme Court — and they currently have 51 seats in the Senate. Thus, as the late night host revealed, the only way for Democrats to avoid confirmation of Trump's nominee is for them to convince their entire party plus some Republican senators to not vote for the president's pick.

Oliver wrapped up his Supreme Court piece by asserting that "the consequences [of Kennedy's retirement] ... will almost certainly be extremely grim" and include the possibility that landmark rights cases, like Roe v. Wade, could be overturned. He then appeared to offer the audience a bit of hope by saying, "But look, I'm happy to say here that there is actually is some good news. Because it turns out there is a constitutional loophole that allows Democrats to ..." But he then quickly added, "I'm obviously lying here, there is no good news, everything is terrible now."

Oliver concluded his piece by chastising people for not voting in previous elections. He also strongly emphasized that it is important to continue to vote in the future — and to make sure that others do so as well. As Oliver put it,

... I want you to go and find a medium-sized cardboard box ... Scream into it. Empty all the anger and frustration you're feeling right now into that box. And when you're done, tape it up, go out, vote, knock on doors, and take that box with you. And if you ever come across someone who is thinking of sitting out an election because 'neither of the candidates quite do it for them and there's not much difference between them anyway,' open that box in their f***ing face and let yourself from this week scream some sense into them.

Clearly the late night host feels very strongly that voting — and holding others accountable — may constitute one of the only ways to protect Americans' rights in the future.

More like this
What’s New On Netflix: Ana De Armas’ 'Blonde' & A Nick Kroll Special
By Arya Roshanian
15 Piping Hot Behind-The-Scenes Secrets From 'Great British Bake Off'
By Emily Dixon and Darshita Goyal
What’s New On Netflix: Meet 'The Real Bling Ring'
By Arya Roshanian
Jinkx Monsoon Is About To Get Real Sketchy
By Sam Ramsden
Get Even More From Bustle — Sign Up For The Newsletter