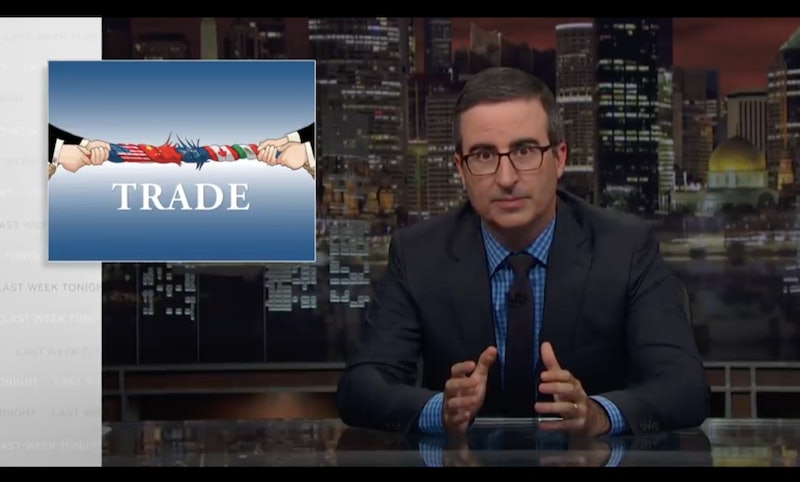 On the most recent episode of Last Week Tonight, John Oliver's trade wars segment broke down how Trump's tariffs are seriously impacting jobs — and not for the better. On his show, Oliver noted that he believes that Trump's apparent dearth of trade knowledge has made life harder for many Americans.

The late-night host opened his show by indicating that the president thinks he knows a great deal about trade, with Trump once saying during an interview, "I love trade ... trade's always been my thing." However, the comedian suggested that Trump may know less than he thinks about trade, particularly when it comes to tariffs and how they affect American workers.

As Oliver reported, this year, Trump placed tariffs on over 10,000 products from China, the European Union, Canada, and other locations. In response, several trade partners have placed tariffs of their own on American goods. Thus, as Oliver noted, Trump's tariffs have caused other countries to respond in a way that harms American workers — especially in the agricultural sector.

Indeed, on his show, the comedian played interviews of various farmers saying that Trump's tariffs have slashed their profits and livelihoods, since many of their products are exported to countries which have instituted tariffs in response to those levied by Trump. In one clip, an American farmer noted that he hopes the trade war will soon be over. "I always hope that, one morning, President Trump is just going to wake up and send out that 3:30 in the morning tweet says, 'tariffs are gone,'" the farmer said. In response, Oliver appeared alarmed at the notion that so many aspects of that farmer's life could depend on one tweet from Trump, saying, "Wow, that is a depressing thought. That guy's livelihood depends on a tweet that says, 'tariffs are gone.'"

Oliver then suggested that Trump's lack of understanding of the interconnected nature of trade has further hurt American jobs. The late-night host acknowledged that Trump's steel and aluminum tariffs can help American workers in these industries, with a June 2018 report revealing that the steel and aluminum industries could gain over 26,000 jobs. However, this same report indicated that, across all other industries, the tariffs could result in a loss of over 400,000 jobs, seemingly indicating that the tariffs have a negative effect on employment overall.

As Oliver described, these negative implications are occurring because "nothing happens in isolation [and] there are downstream effects to tariffs." For example, the host pointed out that a Missouri-based nail factory saw the price of its raw material for making nails, steel, readily increase following Trump's tariffs. As a result, the company's sales diminished by half and the company laid off over 100 employees.

Oliver then noted that, if Trump really wanted to improve Americans' employment situation, he believes the president would be better off doing nothing at all (or doing something with no relation to trade) as opposed to levying tariffs. As the late night host put it:

If Trump’s trying to create jobs, almost anything would be a better idea than tariffs. He’d be better off dressing a turtle up like David Bowie and throwing him into a pool full of milk. Will that create jobs? No. But it won’t actively lose hundreds of thousands of them.

Oliver wrapped up his trade segment by noting that, with his tariffs, Trump seems to be achieving "the exact opposite of what he says he wants" in terms of American job creation. As a result, Oliver suggested that perhaps the president needs some "basic economic lessons" to rectify this issue. He then played a short, Last Week Tonight-produced animated clip that defined basic trade terminology — and offered some perilous warnings about the implications of bad trade decisions.

Overall, Oliver certainly seems to think that Trump's tariffs are having some very negative consequences for many Americans — and hopes that the president will heed his advice when it comes to future economic decisions.