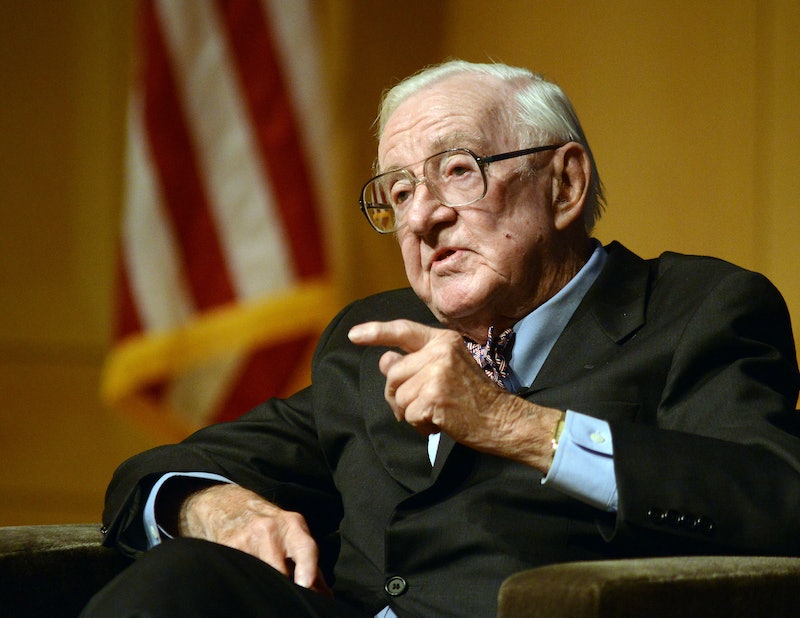 According to an interview published in The Wall Street Journal, former Justice John Paul Stevens said President Trump is "exercising powers" that don't belong to him. The retired justice, who served from 1975 until 2010, is releasing a book, The Making of a Justice: Reflections on My First 94 Years, that references cases in which the Supreme Court ruled unanimously against a sitting president. In one such case in the 1970s, SCOTUS ruled against President Nixon — even though some of the justices deciding the case were appointed by him.

"I think there are things we should be concerned about, there’s no doubt about that," Stevens told The Journal, reportedly hesitating to get into specifics. "The president is exercising powers that do not really belong to him. I mean, he has to comply with subpoenas and things like that," he went on to say according to the piece.

Stevens is now 99 years old and has often been ahead of his time, including on school segregation and laws that outlawed gay sex, The Journal reported. For both issues he came down on the side now nearly universally accepted as correct, way ahead of the full court. He wrote about segregation in a memo as a clerk for the court in the 1940s, and in 1986 he dissented in a case about sodomy laws — a majority on the court wouldn't agree with him until 2003.

Regarding whether a majority of the Supreme Court agrees with whether Trump is abusing power, he wouldn't tell the paper. "I wouldn’t want to predict that anybody’s going to take the incorrect view," he told The Journal when asked about the court resolving any future case between the president and the Democratic House of Representatives over subpoenas. "But certainly, the correct view is pretty clear."

House Financial Services Committee Chairwoman Maxine Waters and House Intelligence Committee Chairman Adam Schiff have subpoenaed Deutsche Bank and Capital One for Trump's financial records, and Trump has sued to stop the records from being shared.

Apart from Trump, Stevens has more critiques about how things are going. Many of the issues that he sees today on the court, Stevens told The Journal, stem from the current members ignoring prior legal decisions. "I think the law is better served by sticking to the ways it has developed over the years," he told the paper.

His other disappointment comes from a different issue — completely separate from the presidency. "The other issue I’ve been disappointed in their failure to treat political gerrymandering just like racial gerrymandering," Stevens told The Journal, "because it’s certainly easier to identify which voters belong to a particular party than knowing what their race is."

President Trump's actions may ultimately come before the court. And if so, Stevens hopes the current justices follow Supreme Court precedent in making their decision.