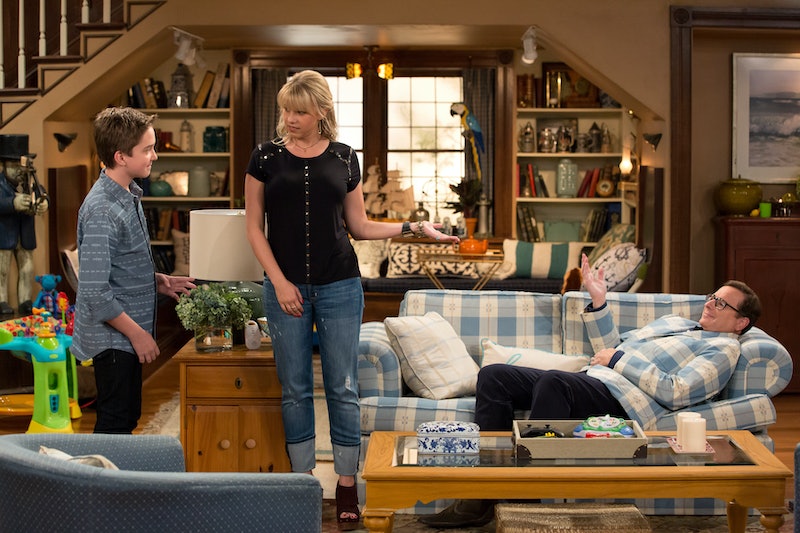 Full House may be coming to an end (again) with the upcoming series finale of Netflix's reboot Fuller House, but other things live forever, including iconic furniture. John Stamos revealed he has the Full House couch on Instagram by showing off how he's using it today. Hilariously, the rest of the cast was not aware of the couch's whereabouts, resulting in some Instagram comment gold.

On Tuesday, March 31, Stamos posted a photo of how he's using the legendary blue plaid living room sofa seen on the sets of both Full House and it's modern-day reboot. Instead of preserving it in a sacred place, as most historical artifacts would be, or using it for its intended purpose (sitting), he's made it a baby gate his one-year-old son Billy. "Baby safety gate or one of the most iconic couches in pop TV history? You make the call," he captioned the picture of Billy standing by the couch, which has been place in front of his staircase.

It seems that his Full House co-stars had no clue that Stamos was in possession of the couch, causing a little jealousy amongst the cast, as captured by the Comments by Celebs Instagram page. "WHAAAAATTTT?!," Jodie Sweetin replied in shock. Meanwhile, Candace Cameron Bure was more surprised that her TV dad Bob Saget didn't have it. "You got it?! Not Bob?," she asked.

Saget didn't seem to mind Stamos showing it off. "I don't know what it is John, but it comforts me," he wrote, also joking in a separate comment, "Did you take the alcove too?" However, Kimmy Gibbler did not approve, with Andrea Barber jokingly labeling Stamos a "Thief!"

Ever the comedian, Dave Coulier, better known as Uncle Joey, had a few jokes up his sleeve. "A lot of my farts are still in that couch," he wrote. He also responded to Saget's question, saying that he got the alcove (as well as Manny the Mannequin), and jokingly asked, "Who got the sea pappy?"

The exact same couch was used on both Full House and its 2016 reboot. It was the cherry on top of the nostalgia fest that was Fuller House, which saw the return of most of the original cast (minus the Olsen Twins, naturally). The last nine episodes of the show's final season will stream on Netflix later this year, but if this is any indication, this will not be the last that fans see of the legendary Tanner couch.

More like this
Netflix Reveals First Look At Wednesday In The 'Addams Family' Spinoff Series
By Bustle Editors
A New 'And Just Like That' Table Read Pic Confirms A Key Character's Return
By Jack Irvin and Grace Wehniainen
Nicola Coughlan Shared A Lady Whistledown Excerpt From ‘Bridgerton’ Season 3
By Grace Wehniainen, Alyssa Lapid and Sam Ramsden
Lindsay Lohan & Jonathan Bennett Celebrated Mean Girls Day Very Differently
By Jake Viswanath
Get Even More From Bustle — Sign Up For The Newsletter