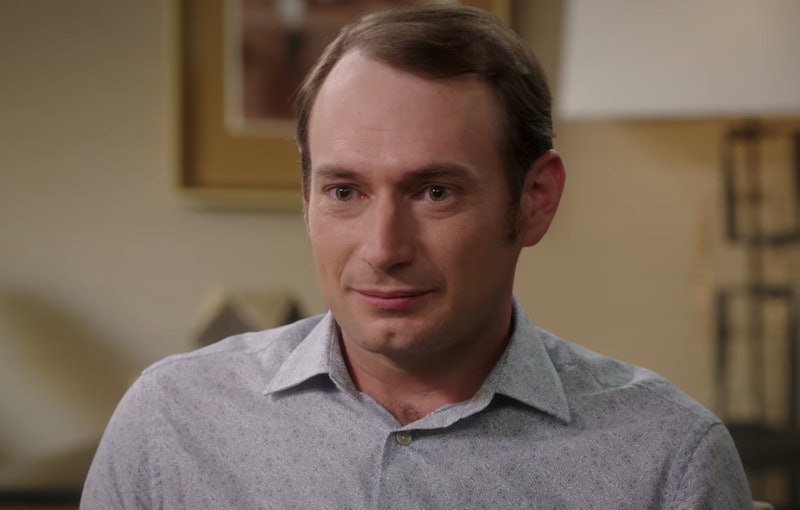 If anyone's forgotten where The Good Place left off before its Season 4 premiere, here's a quick refresher. In Season 3, Eleanor, Michael, and co. discovered that no one has gotten into the actual Good Place in a very, very long time. Michael, Shawn, and the Judge agree to reboot their simulation one more time, to see if bad people can become good in the same way that Eleanor, Chidi, Jason, and Tahani have. Enter Brandon Scott Jones, who plays John Wheaton on The Good Place.

It's obvious pretty much from the jump that John is a total jerk. And since Shawn was allowed to pick these four new humans, the self-proclaimed "naughty bitch" concocted a Molotov cocktail for the Soul Squad. To start out, Chidi's ex-girlfriend, Simone (Kirby Howell-Baptiste), is one of the newest additions to their little experiment. Then there's John, whom audiences learn was a petty celebrity blogger back on Earth. His website, The Gossip Toilet, was incredibly cruel to Tahani. As the socialite explained to her friends, "He made it seem like I was shallow, plagued with jealousy, and prone to fits of melodrama!!" (Which was absolutely true, but that doesn't mean it didn't sting any less!)

However, just because John is a messy bench who loves drama doesn't mean Brandon Scott Jones is. He was recently in Rebel Wilson's 2019 Isn't It Romantic?, in which her character, Natalie, is knocked out on the subway platform and finds herself in a classic rom-com. The Good Place actor played Natalie's neighbor, Donny, who is transformed into a tongue-in-cheek gay character once the rom-com sequence kicks in.

"Being the producer of the film, it was really important to me that obviously we cast an openly gay actor for the role of Donny so that the character could not in any way be construed as mocking a gay guy," Wilson told the L.A. Times. In an interview with Out, Jones said, "It almost feels like we're bringing that [stereotypical gay] character into the modern world a little bit, and reminding people that queer people like this are all around us, and that the one way they've been portrayed for so long isn't the only way that we have to see them."

Jones also had a small role in the 2018 Melissa McCarthy-led film Can You Ever Forgive Me? — an experience which he commemorated on Instagram. "[Director Marielle Heller] gave me an unforgettable piece of direction after my first take, she said: 'you know, Brandon, this isn't a broad comedy'... who knows if I took the note but dayum I was grateful to be there!"

It should be noted that The Good Place actor has a background in comedy and often performs at the Upright Citizens Brigade, which perhaps explains his appearance in the 2016 improv film, Don't Think Twice. It also seems like Jones goes way back with The Good Place star D'Arcy Carden, who was also a UCB performer. Jones has also appeared in two Chris Kelly projects: The former SNL writer's 2016 indie film Other People, as well as his Comedy Central show, The Other Two, where he played one of Cary's coworkers. Jones has also played small roles in shows like Broad City, Girls, and Difficult People.

So while pobody's nerfect, it seems like Jones is "nerfect" to play the Bad Place's newest dirtbag, John Wheaton.

More like this
Everything To Know About 'Loot' Season 2
By Kadin Burnett
UK Viewers Are Now Able To Board Seth Macfarlane’s 'The Orville'
By Frances Stewart
In Rap Sh!t, Social Media Has Main Character Energy
By Aramide Tinubu
Nicola Coughlan Just Revived 'Derry Girls' In The Most Unexpected Way
By El Hunt
Get Even More From Bustle — Sign Up For The Newsletter