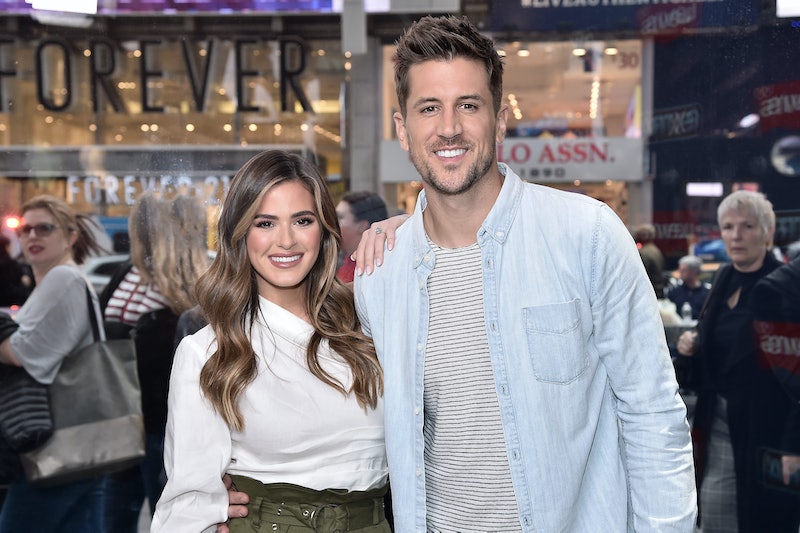 JoJo Fletcher and Jordan Rodgers may still be happily engaged four years after their journey on The Bachelorette came to a close, but that doesn't mean it was always smooth sailing. In fact, during recent interviews, JoJo and Jordan admitted they struggled with their relationship during the first year of their engagement. In fact, things got so bad, they almost decided to call it quits on multiple occasions.

“You get a lot of perfection on the show. You get amazing dates, you see the best of someone. sometimes that not real life,” Jordan revealed during the couple's appearance on The Bachelor: The Greatest Seasons — Ever!, which aired a recap of JoJo's season on Monday, June 29. “You go through ups and downs and we’ve gone through our fair share of ups and downs.”

One of their biggest obstacles was figuring out how to be a normal couple outside of the Bachelor universe, which had kept them in a romantic bubble and far away from real life problems. "We met on a TV show. Like, it was just by chance. It was a fairytale and it's not real life," Jordan explained in a separate interview with Entertainment Tonight, adding that it resulted in a year of "bad fights and arguments."

For her part, JoJo struggled with the rumors and reports she would see in the tabloids about their relationship, making her question whether she or not she could really trust Jordan with her heart. "I was never used to the media and tabloids, and I didn't understand that world at all. So, that was a lot of pressure on me," Fletcher confessed to ET. "Then you start doubting, like, 'Do I really know this person? What's true? What's not true?' And then that causes friction between your relationship, because you're supposed to be each other's rock and support."

JoJo went on to explain how they also had a difficult time communicating their concerns to each other due to their "very different styles," which only compounded their issues further. And since they were never really given the opportunity to fight and squabble like a normal couple on the series, it was all a new experience for them — and one they weren't sure they would be able to recover from.

"You don't ever get to have conflict on the show. You really don't. You may have a little bit and... but you never learn how to fight," Jordan added. "And anybody that's in a relationship knows that you need to know how to navigate relationship conflict."

Four years later, it seems they've succeeded in learning how to deal with any bumps in the road, including the coronavirus. JoJo and Jordan were forced to put their wedding on hold until 2021 due to the COVID-19 outbreak, but if these two can make it through a season of The Bachelorette and come out stronger than ever on the other side, then there's nothing they can't overcome — even a national pandemic.