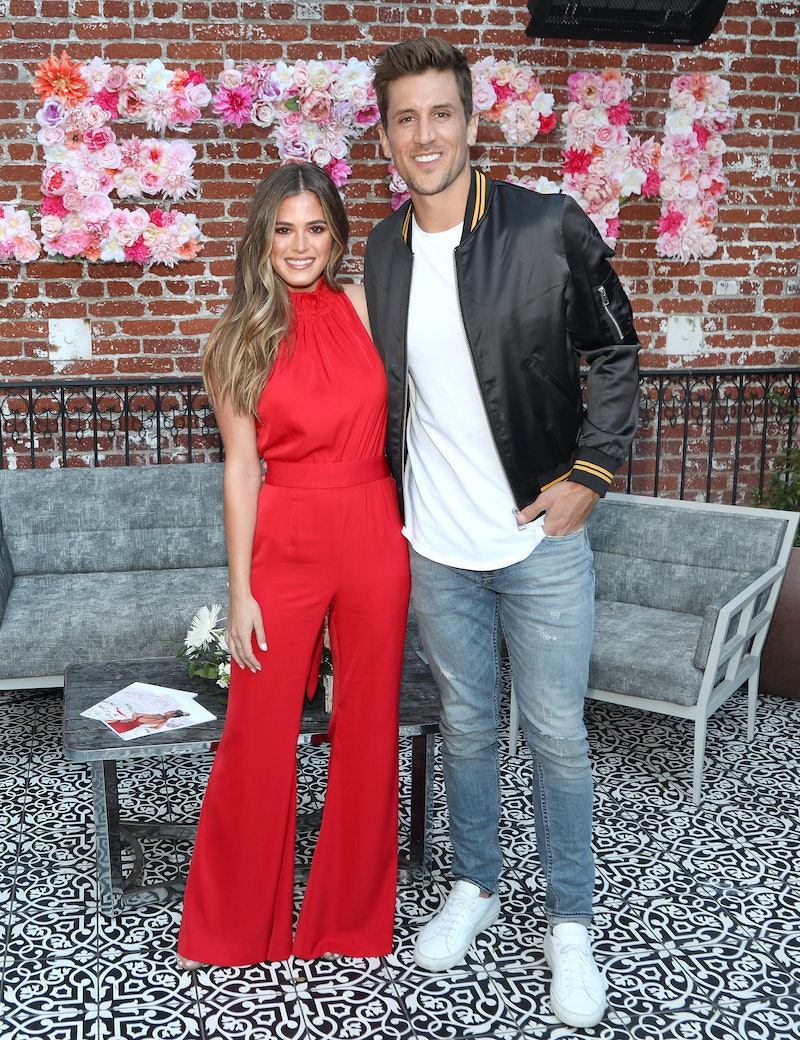 Fans of The Bachelorette have been rooting for JoJo Fletcher and Jordan Rodgers ever since they got engaged on the Season 12 finale. Now, JoJo and Jordan finally know when they're getting married and where. Well, they sort of do. At the very least, they have narrowed things down and are moving forward with plans.

In a July 23 interview with Entertainment Tonight, JoJo revealed, "We're waiting to find the exact date with our venue, but that's it." Beyond that, the former Bachelorette lead shared that they are "actively planning" and intend to exchange vows in spring or summer 2020.

However, it does not seem like the couple has actually chosen the venue. JoJo elaborated on the wedding location during a Life & Style interview. The Dallas native actually confessed, "We have to find a venue first."

She elaborated, "I can’t wait until nailing down that detail because once that detail is nailed down. Everything else can kind of happen after it, but I feel like it’s the hardest one — it’s finding your venue, setting the date. So, hopefully, we get there."

They might not have the venue selected, but the couple did make appointments to look at venues in California, Jordan's home state. JoJo told Extra, "We have appointments to go look at our venues... We’re going out to California — it’s going to be in California — couple different locations, couple different venues, then based on what we love and what’s available, we will hopefully have a date set in a couple of weeks."

During that same interview, Jordan joked about his role in the wedding planning process. He remarked, "My involvement is: Wear a suit and taste the cake." JoJo was not on board with that plan. She clarified, "Some girls may like that, but you're fully involved."

Even though they joked about how involved Jordan will be in the process, they do agree on the most important thing: they are ready to start the planning even though they are very busy renovating homes. JoJo commented, "We went through eight properties in three months and we didn’t kill each other, and after that I’m like, 'Now it’s time to set a date!'... We can get through anything."

Even though the couple has revealed that they're looking for California venues in recent interviews, JoJo got more specific about the location when she spoke to People on July 23. She elaborated, "We want an outdoor wedding in California either Malibu, Napa or Santa Barbara."

She also discussed the feedback she's received from Bachelorette fans about the couple's wedding since Season 12 wrapped. She reflected,

"In the beginning, we had more of the ability to say we’re going to date and court each other, but then three years go by and we started to feel like people were annoyed by it. They’re like, ‘You’re never going to get married!’"

Nevertheless, things are working out the way they were supposed to. JoJo maintained, "We wouldn’t change it." She added, "Without having those years to go through different seasons of life together and learning how to navigate through the good and the bad, I wouldn’t feel as confident."

Ultimately, the reality TV star concluded, "I’m happy we waited. But now we’re good to go!" And so is the Bachelorette fandom, hoping for wedding planning updates since 2016.