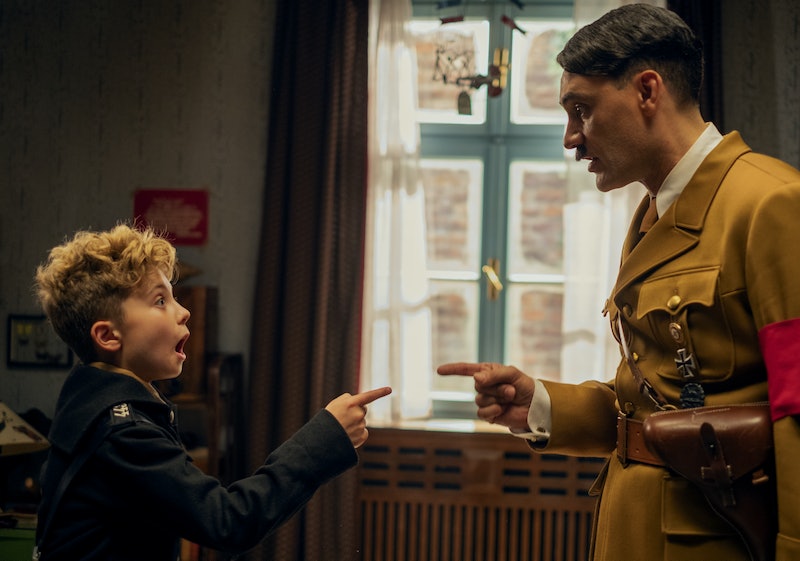 How do you end up making a dark comedy about a 10-year-old aspiring Nazi who has Adolf Hitler as an imaginary friend? For Jojo Rabbit writer, director, and actor Taika Waititi, it all started with his mom. The idea for the strange satire might sound like something the What We Do In The Shadows creator would have come up with on his own, but Jojo Rabbit is based on a book his mom recommended the filmmaker read. He just added his own major twist.

"I wrote this movie in 2011 based on a description of a book that my mother told me," Waititi told Variety at the Toronto International Film Festival. The book that his mother, who is Russian-Jewish, suggested is Christine Leunens' Caging Skies, about Johannes Betzler, a Hitler Youth in Vienna during World War II. While Johannes is being trained to become a steadfast Nazi, he finds out that his parents are secretly anti-Nazi and are hiding a Jewish girl named Elsa in their home.

Leunens was inspired to write the book after she met a French woman whose family had housed a Jewish man during the war; the woman ended up marrying him. "I always felt there was something in that — having someone in your home in hiding — that relationship you would have with the person," Leunen's told New Zealand publication Stuff. (Like Waititi, the author is a New Zealander.) "I let my imagination take it from there."

Waititi kept Leunens' plot for the film, but added in the part where Johannes, or Jojo, has Hilter as an imaginary best friend... a goofy Hitler, who gives pep talks and advice adds another level of absurdity to a book that has already been described as "disturbing and blackly comic, haunting and cleverly satirical."

Speaking to IMDb at TIFF, Waititi said that he loved the story in the book, but since he's not a "dramatic storyteller," he needed to "put more of myself in there — literally." In addition to adding the Hilter role, Waititi plays that childlike version of the dictator in the film. Asked if it took convincing to get Leunens on board with the fake Hitler aspect, Waititi deadpanned, "No, I tricked her big time into giving me those rights and didn't tell her at all that I was going to do that."

"[Waititi] sent me the screenplay and he said, 'It's still your baby, it just has different clothes,'" Leunens told Stuff. The writer was surprised that the movie was a big production by a major studio. She told Stuff, "At first I thought I would end up being on the set some place in New Zealand, helping cook the meals and watch the kids ... a movie on a shoestring budget."

The movie ended up much more than that, but Leunens' story — an account of war told from a child's perspective — was what had Waititi so interested. He noted while speaking with Variety that he had been reading about the Bosnian War before the film was made. "It struck me," he explained, "that in every war, no one really taps into a child’s experience and sees what the POV of a child is."

He continued, "During wars, grownups act like lunatics and it becomes an absurdist sort of comedy … to see that point of view from a child I thought was something really interesting to highlight how crazy, how stupid war is."