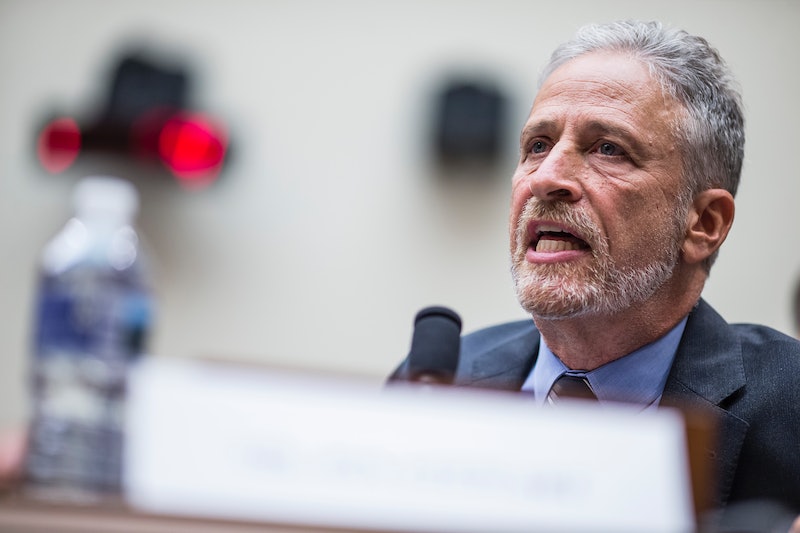 On Monday, a comedian known for his humorous political commentary testified before the House Judiciary Subcommittee on Civil Rights and Civil Liberties. This time, however, he came with scathing criticism, not jokes. During Jon Stewart's testimony on health care for 9/11 responders, the comedian eviscerated members of Congress for not unilaterally reauthorizing the Victim Compensation Fund (VCF), which provides health care funding for first responders and victims of 9/11.

Sitting in front of a gallery reportedly packed with 9/11 responders, Stewart took particular issue with the number of congresspeople who were not present for the hearing. He said such absences were hypocritical.

He continued: "It would be one thing if their callous indifference and rank hypocrisy were benign, but it’s not. Your indifference costs these men and women their most valuable commodity: time."

Renewed in 2010 and again in 2015, funding for the VCF is slated to run out in 2020, per CBS News. About 200 firefighters have died since the 9/11 attacks from related ailments, ABC News reports. That doesn't include the 300 who died on the day itself.

During his testimony, Stewart's criticism of congress members both absent and present was relentless. He contended that even those congresspeople who were present should be uncomfortable that many of their peers were not in the room.

"It’s an embarrassment to the country and it’s a stain on this institution," Stewart said. "And you should be ashamed of yourselves for those that aren’t here, but you won’t be — because accountability doesn’t appear to be something that occurs in this chamber."

Some of those affected by VCF funding also had an opportunity to speak, ABC News reports. Among them was widow Karen Gaines, whose husband, firefighter Scott Gaines, died of tonsil cancer in 2017, per ABC News.

"My husband died waiting for the VCF and believing that this country was going to stand here and protect his family when he couldn't," Gaines said. "So, I only stand as one person, but representing a much larger community that desperately needs Congress' help to please fully fund the VCF."

What impact Stewart's impassioned testimony might have on how Congress votes regarding the VCF remains unclear. But Stewart did catch the public's attention, after clips from the hearing went viral on social media. Fittingly, during his remarks, Stewart contended that it was foolish and inappropriate to ever cast the VCF as purely a "New York issue."

"More of these men and women are going to get sick and they're going to die, and I'm awfully tired of hearing this is a 'New York issue,'" Stewart said. "Al-Qaida didn't shout, 'Death to TriBeCa.' They attacked America."