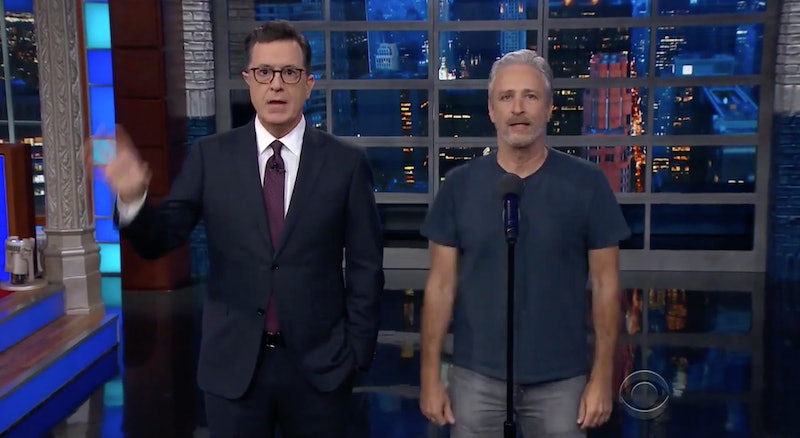 President Trump tweeted out an attack on "unfunny" talk show hosts over the weekend, asking for equal time that would make him look good. As the saying goes, be careful what you wish for. Stephen Colbert was happy to oblige on Monday's episode of The Late Show, and he brought backup to set the president straight. Playing the straight man, Jon Stewart took the stage, and promptly asked, "What the f*ck is wrong with this guy?" And, yes, Stewart called Trump a "sociopath" on network television.

The tweet from Trump seemed likely to pick a fight, and did it ever. Seemingly after watching a Fox & Friends segment, Trump tweeted, "Late Night host are dealing with the Democrats for their very "unfunny" & repetitive material, always anti-Trump! Should we get Equal Time?"

To that question Colbert had a hard, no. "That's not how this works," he explained. "You're the president, we get to make fun of you." But Colbert explained he was feeling extra conciliatory, and he was going to do it anyway. "Just to make you feel better, sir," Colbert explained. "I will now be joined by another host, licensed in 'unfunny,' and that host will offer balance to what I say about the president." Then he welcomed Stewart to the stage.

Colbert explained how it would work, he would perform the usual comedy, teasing the president, and Stewart would serve as a the "balance." "I will do my usual unfair slamming of the president, and you will provide the counterweight," Colbert told his former boss.

And it seems that Stewart had a pretty hard time taking the president's side. When Colbert mentioned the tweet in which the president called for "equal time" on talk shows, Stewart — after being told by Colbert to "be positive" — took a few moments to think. Then he finally responded, "Donald Trump is not a cannibal."

It didn't get much better than that — for the president, that is. The audience ate it up. Colbert then moved on to jokes about Trump being called a "f*cking moron" by his Secretary of State, Red Tillerson. "Not only is that an insult, he gave away Trump's Secret Service code name," Colbert joked.

Stewart's response? "Given the choice between having hot lava poured into my pee hole and Donald Trump being the president," Stewart said, pausing, and shuddering before saying, "I choose the latter."

"Good," Colbert said, "I find this hard too." Then he moved on to Trump's next decision worthy of some talk show criticism, the decision to allow employers to deny women birth control. "Pretty soon, the only contraceptive women will have left is his face," Colbert joked.

Colbert argued that would need to be fact checked and then moved on to show material for his next joke, when Trump took his photo with military leaders and warned of the "calm before the storm." Colbert didn't even get to tell his joke, though. Stewart sounded off, unable to play the counterweight anymore:

Then Stewart acknowledges he couldn't do it. So it was then Colbert's turn to say something positive. "Could I have more time? Colbert asked. When no was the answer, all he could say was, "Donald Trump... is not... a cannibal."

It's fair to say that equal coverage may not be what the president had in mind.