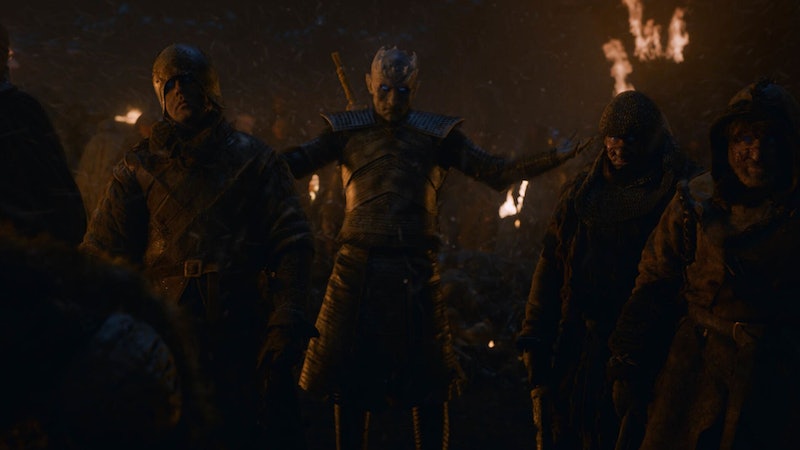 Spoilers ahead for Season 8 of Game Of Thrones. Jon Snow and his turns-out-to-be aunt, Daenerys Targaryen, have been through a lot lately between having sex, finding out they're related, and dealing with the uncomfortable fallout. But they had to put their relationship woes aside to fight together in April 28's Battle of Winterfell, which turned out to be just as epic as audiences had anticipated. Jon's fight with the Night King, however, proved to be an uneventful part of an absolutely buckwild hour and a half of television.

Both Jon and Dany spent the first hour of the episode riding her two remaining dragons, searching for the Night King and breathing fire down on the wight army. And while the Head White Walker In Charge hung back, he and his wight dragon — the reanimated Viserion — finally appeared, and it looked like he, Jon, and Dany were about to have their final showdown. After a quick dragon fight with the two, he eventually landed on the ground of Winterfell taking in the destruction he'd wrought.

Just when you wondered what his deal was, the Night King raised his arms like a master puppeteer (which he is, if you really think about it) and raised all of the fallen soldiers who'd died while defending Winterfell — including some of the Dothraki and Edd. How do you defeat a guy who can just keep replenishing his army (and adding new soldiers to it) at will? It was looking hella hopeless.

And it was for a while there, because the Night King's magic or whatever it was also allowed him to reanimate the Stark corpses in the Winterfell crypts just like basically everyone and their mother predicted. So both outside and inside, the Army Of The Dead was attacking Winterfell. Eventually though, the Night King seemed to tire of wandering around and was finally lured over to Bran by the Weirwood tree. Theon attempted to attack the White Walker, but didn't make it. Just when it seemed like the Night King was going to snatch Bran up — Arya came charging at him with her life. It was harrowing for a split second until she took out her dagger and stuck it right in the Night King's chest.

He broke into a bazillion little pieces of ice and seemed to actually be dead. Also as predicted, killing the Night King meant that all of the wights and White Walkers (and poor Viserion) also disintegrated into nothing. All if took was just one quick jab from Arya, who may or may not be the prince that was promised now.

Everyone seemed to believe that the Night King had beef with Jon Snow and Bran based on all of their previous interactions, so it was surprising that Jon and the Night King's fight during the Battle of Winterfell ended with Arya, of all the Starks, taking the guy out.

That is, of course, if he really is dead or if there will be some way to revive him before the series finale. What are fans going to do with three remaining episodes and no Night King? It's all just too simple.