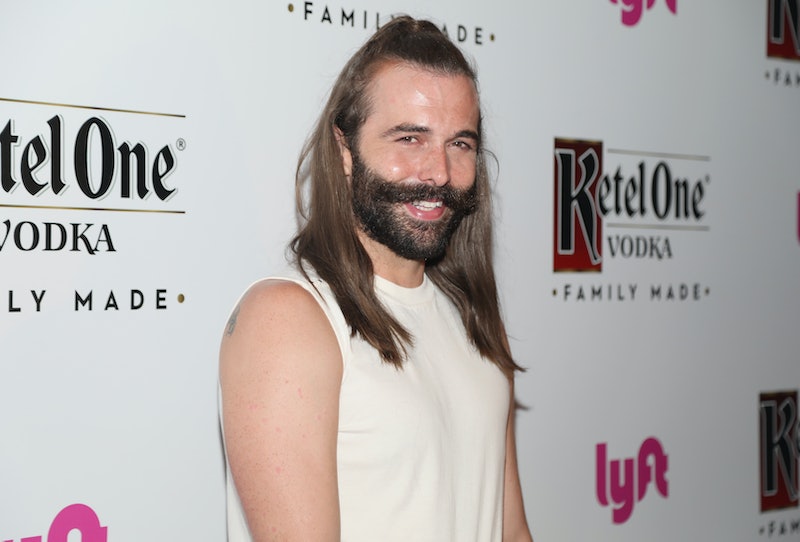 Can you BELIEVE?: Queer Eye star Jonathan van Ness is writing a memoir, which means he has officially joined the ranks of Karamo Brown, Antoni Porowski, and Tan France, his fellow Fab Five members who are soon-to-be-published authors. Announced by HarperOne, an imprint of Harper Collins, on Friday afternoon, Over the Top goes on sale Sept. 24, 2019. The memoir's title comes from Van Ness's own experiences growing up in a Midwestern town "that didn't understand why he was so... over the top."

"I left it all on the dance floor on this project & I can’t wait to share it with you," Van Ness wrote in a tweet on Friday. In addition to starring in the Netflix series Queer Eye and writing books, Van Ness hosts the podcast Getting Curious with Jonathan Van Ness and stars in the web series Gay of Thrones, a parody of Game of Thrones.

According to the publisher, the book "uncovers the pain and passion it took to end up becoming the model of self-love and acceptance that Jonathan is today. Jonathan shares never-before-told secrets and reveals sides of himself that the public has never seen. JVN fans may think they know the man behind the stiletto heels, the crop tops, and the iconic sayings, but there’s much more to him than meets the Queer Eye."

'Over The Top' by Jonathan Van Ness
Amazon

Van Ness is the fourth member of the Fab Five to announce a book project. Karamo Brown's book, Karamo, hits bookstores next week, on March 5; Tan France's memoir, Naturally Tan, will be published on May 14; and Antoni Porowski's cookbook Antoni in the Kitchen is set to be released on Sept. 9. Bobby Berk has yet to throw his weight behind a book, but he did — along with the other four stars of the Netflix series — co-author the 2018 title Queer Eye: Love Yourself. Love Your Life., an inspiring guide to food, clothes, design, culture, and beauty, delivered directly from the Fab Five to you.

Yes, you do have to wait until September to read about Jonathan Van Ness's life in Jonathan Van Ness's words, but luckily for you (and me and everyone) season three of Queer Eye drops on Netflix on March 19, which means you get more of Jonathan, Antoni, Tan, Bobby, and Karamo very, very soon.

Hopefully, Over the Top will match Jonathan Van Ness's effervescent personality — or at the very least, provide fans with more gems like "You're strong, you're a Kelly Clarkson song, you got this."