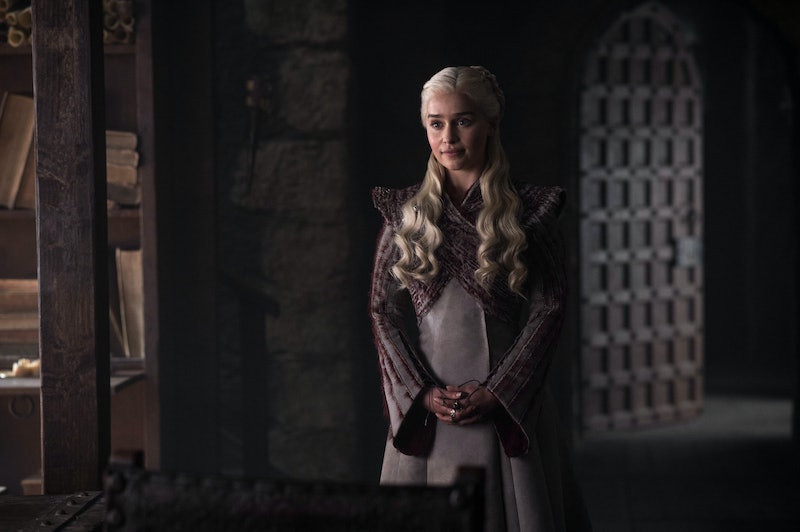 Jon Snow may hate titles on Game of Thrones, but his latest downgrade is raising a lot of eyebrows in the fandom. Daenerys called Jon "Warden of the North" on Game of Thrones and while that is technically who he is now, it's weird considering their current dynamic. Up until the very last minutes of the second episode of the final season, she didn't even know that he might have a claim to the Iron Throne.

This isn't necessarily new information, but it's the first time we've heard that title for Jon spoken out loud. Since Jon has bent the knee to Daenerys Targaryen, he gave up his status as King in the North. He is Daenerys' Warden, while Sansa retains her title as Lady of Winterfell.

Poor Jon. He never wanted any of these titles to begin with — Bastard of Winterfell, Lord Commander of the Night's Watch, then King in the North. Now he's found out that he's Aegon Targaryen, the true heir, by most accounts, to the Iron Throne. Soon enough, he'll have as many names and titles as his new girlfriend, the Mother of Dragons and Breaker of Chains, and all that. Speaking of, the "Warden of the North" reveal is also a funny moment, in a darkly comic Game of Thrones sort of way, because Jon also just found out that Daenerys is his aunt.

Warden of the North is, of course, the title Ned Stark had under Robert Baratheon's rule. It was also the title that Littlefinger held under Cersei's rule, but let's not focus on that. Instead, here's what Twitter had to say about Dany's casual new name drop.

Jon's angst about his ever changing political status aside, this actually raised an interesting issue — one that Sansa and Daenerys discussed later in the episode. What happens to the North when all is said and done? Jon bent the knee to get Daenerys' support (and because he loves her) and may support her claim to the Iron Throne. However, in the War of the Five Kings that started off Game of Thrones in Season 1, the North was fighting for independence.

If they go back to a Warden system, and have to answer to King's Landing again, all of that fighting will be for nothing. Sansa wanted Daenerys to promise that the North would be its own entity under her rule, and while they were interrupted before Dany could give an answer, it didn't look good. But with the Night King officially at Winterfell's doorstep, all of that gets pushed to the side next week. There won't be time to debate whether Jon or Sansa should be Warden, or whether the North should be ruled by a Warden at all.

Hopefully, in the battle to come, no new names will come Jon's way. He won't be able to handle it, and neither will fans.