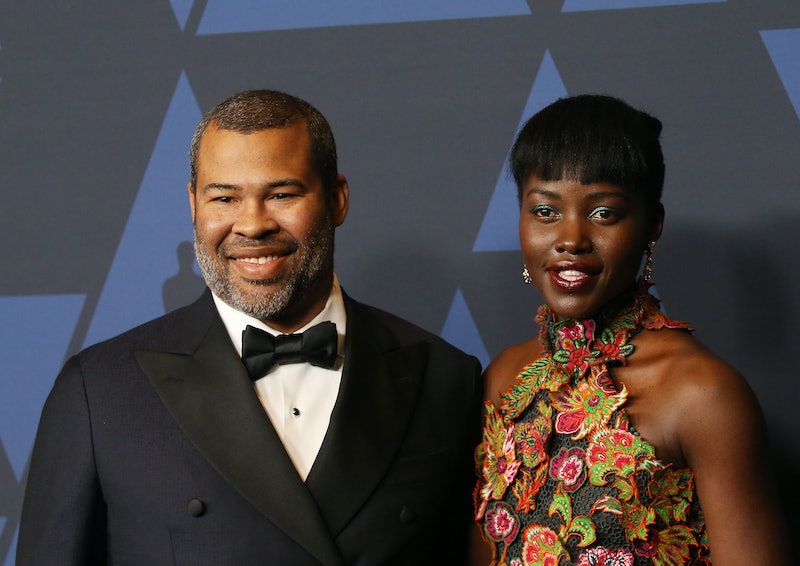 The creator of Us doesn't seem to be interested in photos of fans dressed as the Tethered. Jordan Peele said Us Halloween costumes make him feel "uncomfortable." Us, his horror film that arrived in theaters in March to acclaimed fanfare, follows a family of four led by matriarch Adelaide (Lupita Nyong’o) and patriarch Gabe (Winston Duke) that are terrorized by evil doppelgängers during a family vacation. While Peele is proud that the film and its eerie imagery and garbs (the red jumpsuit! the scissors!) have resonated among fans this Halloween, the writer and director extraordinaire is actually unnerved by the costume tributes due to its subject matter.

“Now, in Halloween season, I’ve started receiving a lot of people in Tethered costumes, which, it doesn’t make me comfortable,” Peele told Variety at the Governors Awards on Sunday, Oct. 27. “I like the fact that the movie is happening, it’s a phenomenon, it’s resonating, it’s iconic, but… they’re impersonating the stalkers and sending me stuff. I just feel like, just don’t go into that mindset.”

Peele added that Nyong’o, who joined him on the red carpet at the Governors Award, remained in character as her doppelgänger Red at all times on set. Due to that terrifying experience that he's still very much reeling from, he told Variety, “Don’t send me pictures of yourself dressed up as creepy characters. I’m good.”

Peele isn’t the only one to receive Us fan tributes following the film’s success. Nyong’o revealed in the interview that the 11:11 clock motif still haunts her in the way that Tethered costumes haunt Peele. “I would receive text messages, screenshots of just ’11:11,’ and then I would just do it to him,” she told Variety. “Four months went by, I hadn’t heard from Jordan, and then I just got… ‘’11:11′ in the middle of nowhere, and that’s always creepy, especially coming from him.”

While Peele may be unnerved by the Us costumes, they'll soon make their way to the small screen nonetheless. The cast of ABC’s Black-ish pay homage to the horror film in the show’s upcoming Halloween episode, set to air on Tuesday, Oct. 29. Tracee Ellis Ross took to Instagram last week to share photos of the Johnson family in matching red jumpsuits from the film. “Tethered. The Johnsons do it again,” she captioned the post. “Shout out to @blackishabc hair, makeup, and wardrobe for killing the Halloween game.”