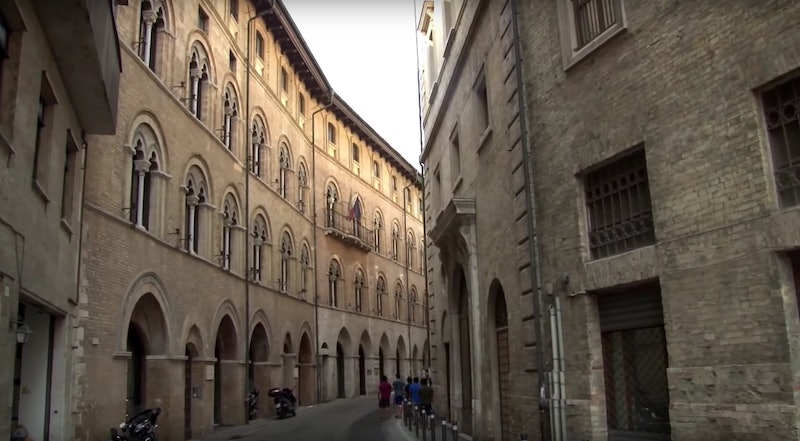 A panel of female judges in Ancona, Italy acquitted alleged rapists two years ago in a case that reentered the spotlight this week. The country's highest appeals court voted on Friday to reexamine the 2017 ruling, which included a note that the alleged victim looked "too masculine" to have been attacked. Now people around the globe have their eyes on Ancona as activists hold protests and the Italian rape case proceeds.

The alleged attack took place in 2015, when the woman — who is from Peru — was 22 years old. She says that she went with a group to a bar after an evening class one night and that two men put drugs in her drink and raped her (the defendants deny this). According to The Guardian, doctors determined that the woman had injuries that were consistent with rape and that her blood contained benzodiazepines, which are sometimes used as a "date rape drug."

The men were convicted of rape when the woman took her case to court in 2016. But an appeals court overruled that sentence the following year, in part because the accused argued that they didn't find the woman attractive. According to The Local Italy, the judges wrote in their decision that one of the men "didn't even like the girl, to the point of having stored her number in his phone under the nickname 'Viking', an allusion to an anything but feminine figure, rather a masculine one."

The judges added that a photo of the woman matched the mens' statement that she was too masculine to have taken their interest. "The photograph present in her file would appear to confirm this," they said. They also claimed that it's "not possible to exclude the possibility that" the woman was the one who "organized the 'exuberant' evening," according to The Local Italy.

After the news broke on Friday that her case would be reexamined, the Italian women's rights group Rebel Network staged a protest outside an Ancona court of appeals. According to The Guardian, about 200 arrived in a show of support for the woman, who reportedly moved back to Peru after the 2017 ruling.

"The worst thing is the cultural message that came from three female judges who acquitted these two men because they decided that it was improbable that they would want to rape someone who looked masculine," Luisa Rizzitelli, a Rebel Network spokesperson, told The Guardian. "But to get almost 200 people at the protest was a miracle for Italy — fortunately, it shows that sensitivity towards such topics is becoming stronger."

Though Italian laws are in some ways kinder to survivors of sexual assault than those in the United States, the southern European country — like nearly every nation in the world — still suffers from an epidemic of sexual violence against women. According to United Nations data, 19 percent of Italian women report having suffered violence from a physical or sexual partner in their lifetime. Additionally, 5 percent report violence from a non-partner. According to a 2018 report from the country's national statistics agency, 44 percent of Italian women say they've been sexually harassed.

Now that Italy's highest court of appeals has overturned the verdict in the Peruvian woman's case, it will be retried in a Perugia court about 80 miles away from Ancona, according to The Washington Post.