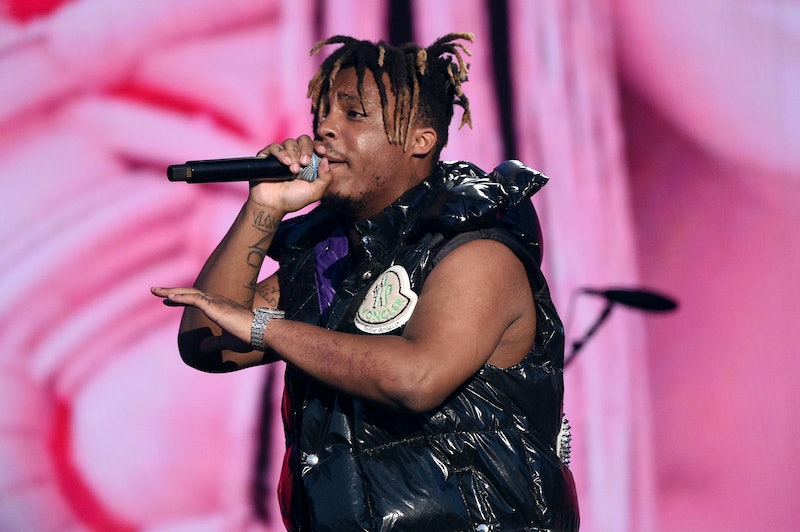 After reportedly landing at Chicago's Midway Airport ending a flight from California early Sunday morning, rapper Juice Wrld collapsed and later died. TMZ initially reported that he suffered a seizure while walking through the airport, and The Chicago Tribune later reported that, according to airport officials, he experienced cardiac arrest. Chicago Fire Department spokesman Larry Langford told The Tribune that paramedics were called to a private hangar near Atlantis Air around 2 a.m. Juice, whose birth name was Jarad Higgins, was then transported to Christ Medical Center, per the Cook County medical examiner's office, and pronounced dead.

“There were no signs of foul play and all individuals aboard the aircraft are cooperating with CPD and have given all of their information," Chicago police spokesman Anthony Guglielmi said in a statement, per The Tribune. "We are awaiting the Cook County medical examiner on the cause and manner of death.” Langford told The Tribune that there was no apparent cause of cardiac arrest, that police will be conducting a death investigation, and that an autopsy will be performed late Sunday or Monday.

A rep for Juice's label, Interscope Geffen A&M Records, provided Complex with a statement about the rapper's passing that read:

"Juice made a profound impact on the world in such a short period of time. He was a gentle soul, whose creativity knew no bounds, an exceptional human being and artist who loved and cared for his fans above everything else. To lose someone so kind and so close to our hearts is devastating. Our thoughts are with Juice’s family and friends, everyone at his label Grade A, and his millions of fans around the world."

The young artist was known for his breakout singles "All Girls Are The Same" and "Lucid Dreams" after his debut EP "9 9 9" rose to popularity on SoundCloud. He also collaborated with rappers including Lil Yachty, Travis Scott, and Lil Uzi Vert, and he toured with Nicki Minaj earlier this year. Needless to say, the news of his death was heartbreaking for many. Lil Yachty, Lil Nas X, Chance the Rapper, and Camila Cabello, among others, shared tributes to the artist on social media.

"He knows our hearts. I really wish we had more talks like that one night in LA. Dude. This is ridiculous. Millions of people, not just in Chicago but around the world are hurting because of this and don’t know what to make of it," Chance wrote on Instagram. "Im sorry. Love you and God bless your soul."

Drake shared his condolences on Instagram as well. "I would like to see all the younger talent live longer and I hate waking up hearing another story filled with blessings was cut short," he wrote.

In the wake of his death, fans are revisiting a specific lyric on Juice's track "Legends" about the loss of rappers XXXTentacion and Lil Peep. "What's the 27 club? We ain't making it past 21," he rapped. After hearing the news, Lil Yachty tweeted about the song. "Listening 2 legends Rn is blowin my mind dawg," he wrote.