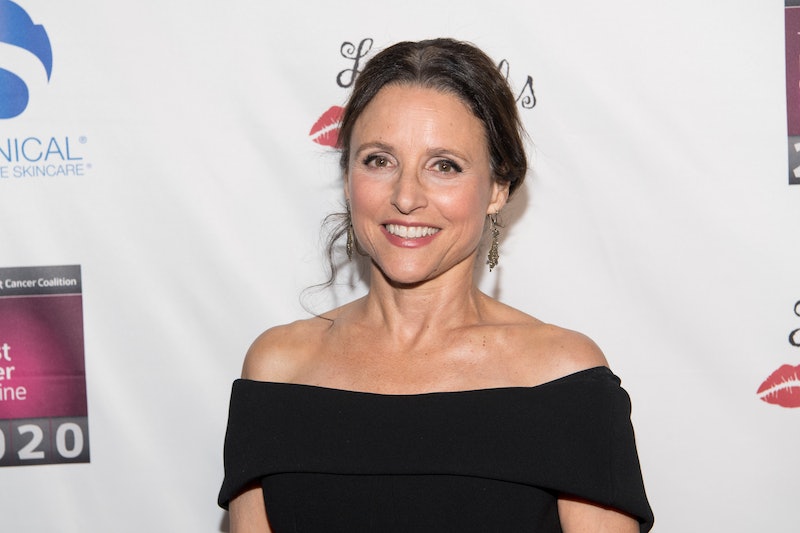 Comedy has long been a medium for political commentary, so it's not altogether surprising that a ceremony awarding a prize for humor in Washington D.C. has comedians taking shots at political figures. On Sunday, Veep star Julia Louis-Dreyfus made jokes about Brett Kavanaugh, Trump's newly appointed Supreme Court justice, while accepting the Mark Twain Prize for Humor at the John F. Kennedy Center for the Performing Arts.

"I attended Holton-Arms, a girls school in the Washington area. It has been in the news lately," Louis-Dreyfus told the audience, according to The Hill, in reference to the elite, all-girls college preparatory in Bethesda, Maryland, that is also the alma mater of Kavanaugh accuser Christine Blasey Ford.

Ford alleged that Kavanaugh attempted to sexually assault her at a party in 1982 while they were both in high school. Kavanaugh, however, denied her claim "unequivocally, and categorically." Although Kavanaugh was ultimately confirmed to the Supreme Court by the Senate, Ford's allegation, and eventual testimony, played a significant role in the divisive and tumultuous political battle that erupted over his nomination.

"Back in fourth grade, as a matter of fact, I was in a very serious Holton-Arms production of 'Serendipity,'" Louis-Dreyfus said. "You know it's funny with us Holton girls — I remember every detail of that play. I could swear to it under penalty of perjury. And yet, I don't remember who drove me to the show or who drove me home. Or if Squee or Tobin were there. Or if Bart put it on his weird wall calendar."

In her testimony before the Senate Judiciary Committee, Ford said there were some details of the night of her alleged assault that she couldn't remember: namely, how she got home and the location of the house where party was held. And the prosecutor hired by Republican senators to question Ford zeroed in on this fact, saying it raised "significant questions" in a memo to the GOP. But studies have shown that stress and traumatic events create chemicals that push a person's brain to only focus on what it feels are the most important aspects of the event — meaning more peripheral details are not stored in long-term memories.

In September, Louis-Dreyfus, who said she was class of '79, was among more than 200 Holton-Arms School alumnae who signed a letter voicing their support for Ford. "We believe Dr. Blasey Ford and are grateful that she came forward to tell her story," the letter read, per The Cut. "It demands a thorough and independent investigation before the Senate can reasonably vote on Brett Kavanaugh's nomination to a lifetime seat on the nation's highest court. Dr. Blasey Ford’s experience is all too consistent with stories we heard and lived while attending Holton."

Back at the Mark Twain Prize ceremony, Louis-Dreyfus kept her Kavanaugh jokes just subtle enough. "This, by the way, is totally true and not some kind of subtle attack on our newest Supreme Court Justice," Louis-Dreyfus said sarcastically. "For God's sake the man has suffered enough."