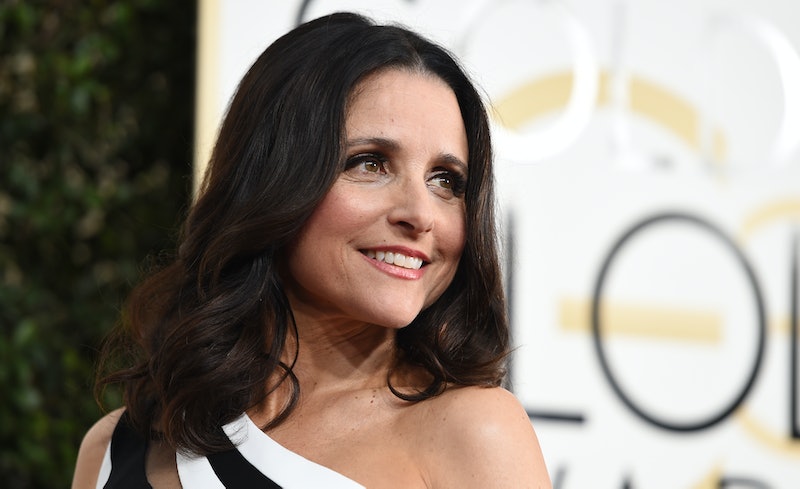 In a tweet posted on Thursday afternoon Julia Louis-Dreyfus revealed that she has breast cancer. In the message, the Veep star told followers about her diagnosis, but also selflessly used the message as a platform to express the need for universal health care to help those who are battling similar illnesses.

"1 in 8 women get breast cancer. Today, I'm the one. The good news is that I have the most glorious group of supportive and caring family and friends, and fantastic insurance through my union. The bad news is that not all women are so lucky, so let's fight all cancers and make universal health care a reality."

The Seinfeld alum's rep told E! News, "Julia is incredibly grateful for the outpouring of support and well wishes."

Louis-Dreyfus just recently broke her own record and won her sixth straight Emmy for Best Actress in Comedy Series for her work portraying Selina Meyer on HBO's hit show Veep. According to statement from HBO to People, Louis-Dreyfus received her diagnosis the day after winning her latest Emmy. Also, in a statement to The Hollywood Reporter, HBO expressed their support, saying,

"Our love and support go out to Julia and her family at this time. We have every confidence she will get through this with her usual tenacity and undaunted spirit, and look forward to her return to health and to HBO for the final season of Veep."

It was announced earlier this month that the seventh season of Veep would be the final one and, according to HBO, the decision to end their hit comedy was made independent from their star's diagnosis, as The Hollywood Reporter reports. HBO also added that they plan to adjust the production schedule for the upcoming final season as necessary.

Colleagues, celebrities, and fans also took to Twitter to express their support and admiration for Louis-Dreyfus during this trying time.

In interview earlier this month with The Hollywood Reporter, Louis-Dreyfus gave readers tons of information about the end of Veep and what's next for her. Shooting for the final season of Veep is scheduled to start on October 16 and when talking with THR about the end of her run as Selina Meyer, Louis-Dreyfus said it was something that she's had to do before. "I struggled with it. And then it just hit me," she said. "It's hard to say goodbye to such a good thing. We struggled with this at Seinfeld as well."

She continued on to provide insight into the reasoning behind ending the hit show and said, "It became clear that this season should be the last season. We don't want to repeat ourselves or wear out our welcome. The story has a finality to it that feels end-of-series."

Then, after being asked what was in store for her in the future, Louis-Dreyfus said, "I'm not retiring, if that's what you're asking. I love to work."

In her acceptance speech for her groundbreaking award on September 17 at the Emmys, Louis-Dreyfus delivered a hilarious and humble speech befitting of the star, and expressed her gratitude for the character she's gotten to play over the last six years:

"We have a great final season that we're about to start filming — a lot of surprises that our fabulous writers have cooked up. We did have a whole storyline about an impeachment, but we did abandon that because we were worried that someone else might get to it first. This is and continues to be the role of a lifetime and an adventure of utter joy. Thank you so, so much."

Julia Louis-Dreyfus is a hilarious and dominating force on the screen, and with her fans, family, and colleagues' well wishes, she has immense support when it comes to dominating her cancer diagnosis, as well.