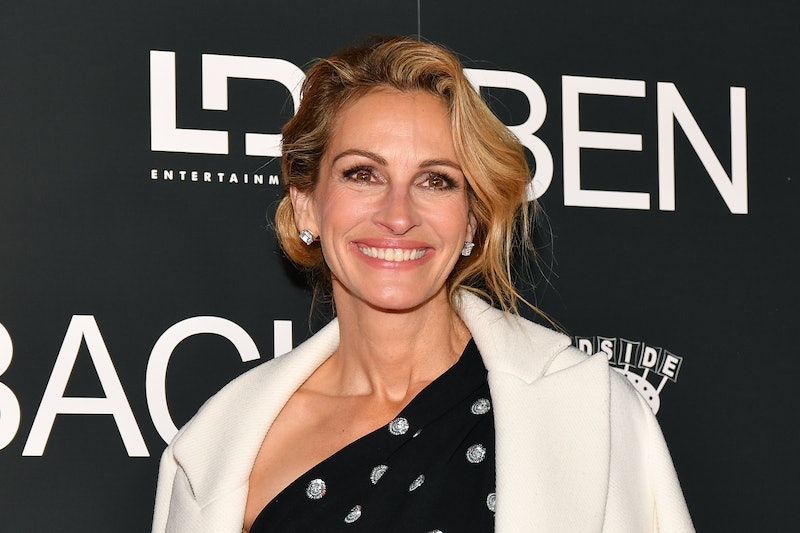 In the early hours of Tuesday, July 16, The Good Place star D'Arcy Carden and Crazy Rich Asians standout Ken Jeong announced the list of 2019 Emmy nominations ahead of the ceremony’s September 22 telecast. However, along with the list of stellar nominees (Billy Porter! Phoebe Waller-Bridge! Christina Applegate! Niecy Nash! Sandra Oh! Catherine O’Hara!), critics and fans alike also compiled a growing list of glaring nomination snubs. Still, the actors on the snub list appear to be taking it all in stride. In particular, Julia Roberts’ Emmy nomination snub reaction is too funny.

Following the announcement of the noms, the Hollywood veteran took to social media with a screenshot of a USA Today article notification on her iPhone. The headline read, “Biggest Emmy nomination snubs: Julia Roberts, George Clooney and Emma Stone are among the A-listers shut out.” The Oscar-winning actress humbly captioned the Instagram post, “Well, I’m in exceptional company at least.”

It’s true. The company is pretty exceptional. Roberts’ snub definitely came as a surprise to many. It had long been predicted that the actress would garner a nomination for her role on Amazon Video's Homecoming, the thriller series in which she also executive produces. Among the other snubs outlined in the USA Today article Roberts shared: Stone for her role in Netflix’s Maniac, Clooney for his role in Hulu’s Catch-22, Tracee Ellis Ross for her role in ABC’s Black-ish, and more.

Homecoming, which premiered in November 2018, garnered Roberts positive reviews for her performance. The series even received several 2018 Golden Globe nominations last year, such as Best Television Series, Lead Actress in a Drama Series (Roberts), and Lead Actor in a Drama Series (Stephan James). While the series is slated to return for a second season, the studio has yet to announce an official premiere date. In January, The Hollywood Reporter reported that Roberts will not be reprising her role in the series, but will still continue to serve as executive producer.

The first season of the psychological thriller followed Heidi Bergman (Roberts), a caseworker at a facility that helps soldiers transition back into civilian life. In a July 2018 interview with Variety, Roberts detailed the “mental challenge” of shooting the series. She said of an 11-page scene filmed in continuous shots, “It was a great mental challenge every day... It became really the fuel a lot of times — how many pages are we going to do tomorrow and is it one shot for all of them or are we going to do a couple of shots?”

While Roberts didn’t receive a Homecoming nom, the Lead Actress in a Drama Series category for this year’s Emmy ceremony is still quite an impressive one; the following women will be vying for the coveted Emmys statuette during the September 22 ceremony: Emilia Clarke (Game of Thrones), Jodie Comer (Killing Eve), Viola Davis (How to Get Away With Murder), Laura Linney (Ozark), Mandy Moore (This Is Us), Sandra Oh (Killing Eve), and Robin Wright (House of Cards).

The 2019 Emmys will air on Sunday, Sept. 22 at 5 p.m. PST on Fox. Roberts, Clooney, Stone, and other A-listers may have been snubbed of noms, but here's to hoping the talented bunch still make an appearance at the glamorous affair.

More like this
How Lady Gaga & Adele Are Closer To The EGOT All Of A Sudden
By Jake Viswanath
Here’s Everything Coming To & Leaving Netflix In August
By Jake Viswanath
Jane Lynch Revealed Why She’s Leaving 'Funny Girl' After Lea Michele Was Cast
By Grace Wehniainen
What’s New On Netflix: 'Never Have I Ever' & 'Indian Matchmaking' Return
By Arya Roshanian
Get Even More From Bustle — Sign Up For The Newsletter