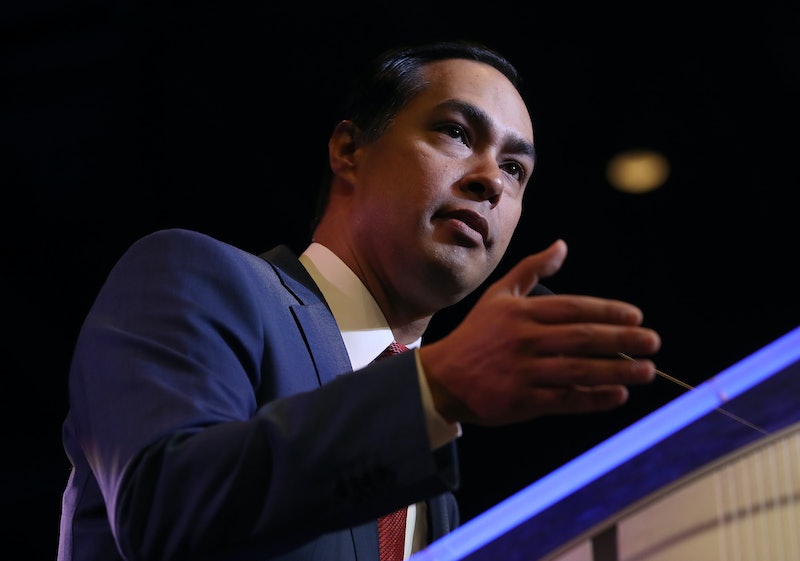 Twenty of the 23 Democratic presidential candidates gathered at the University of South Carolina on Saturday for a Planned Parenthood forum on reproductive rights, where they discussed the slew of anti-abortion legislation enacted in conservative states over the past few weeks, as well as their own proposals for supporting access to safe abortion. During a question-and-answer portion of the forum, a non-binary activist asked candidate Julián Castro how he would expand sexual and reproductive health care access for trans people, according to New York magazine correspondent Olivia Nuzzi, and his answer started out in a pretty powerful way.

The audience member, whose full name hasn't been reported, but who was referred to by activist Renee Bracey Sherman as Oluchi on Twitter, identified as non-binary before asking Castro the question, according to Nuzzi. Before giving his answer, Castro first asked what pronouns the activist preferred, to which Oluchi responded, “I actually don’t use any pronoun,” which was met with applause from the audience, Nuzzi reported.

Castro went on to give a detailed answer about his support for transgender inclusivity in reproductive health care and his past record of supporting trans people in their access to housing, according to Planned Parenthood. Forum attendees and Twitter users were impressed by Castro's answer, but they also noted the importance and power of asking Oluchi what pronoun to use — he was reportedly the only candidate at the forum to ask such a question.

A number of people on Twitter applauded Castro's question; user @queer_spice wrote, "Did I start screaming and crying when @JulianCastro asked about pronouns, and when he talked about not giving away trans rights when other people wanted him to, and protecting trans people's rights? You bet I did."

Some people on Twitter were confused by the activist's statement, though, and didn't understand what it means to not use any pronoun. In response, nonbinary activist and author Jeffrey Marsh wrote, "I am nonbinary, I use they/them pronouns. I don’t know this activist’s motivations, but it’s possible that 'I don’t use any pronouns' is shorthand for 'I don’t use any third person pronouns' Some nonbinary folks feel it’s better to ask others to use our name instead of ‘they’"

The moment was important for many, given how language surrounding reproductive rights — that it's a women's issue, it's about women's bodies or women's rights — often excludes trans people, who actually have an even harder time accessing sexual and reproductive health care. Though the fight for trans rights has become part of the mainstream Democratic platform, many Democrats also still use language like "men and women," which excludes nonbinary people.

Castro's question was also powerful because asking for someone's pronouns is still often considered a "radical" or uncomfortable act to many people. A presidential candidate doing it at a forum in front of 19 of the other Democratic candidates acts as a powerful symbol — and potentially even sets a new bar — for how candidates navigate trans-inclusive language in the future.