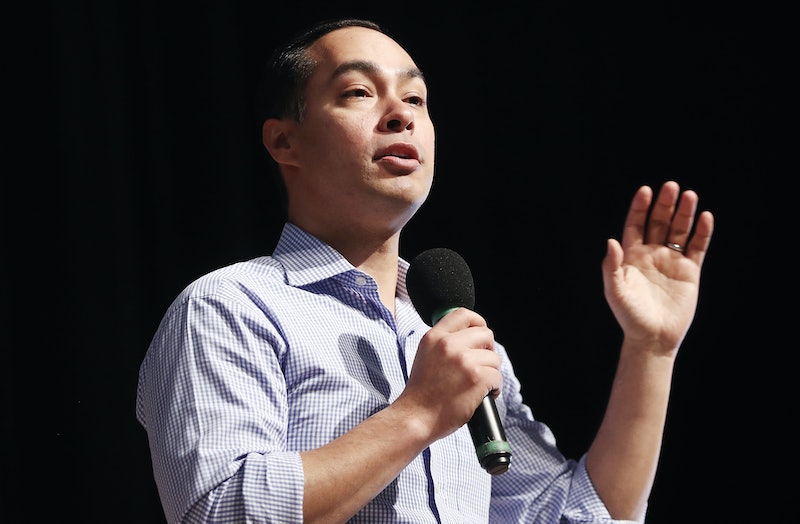 Almost all the Democratic presidential candidates are in agreement on progressive policies like Medicare for All and gun control. Reparations, though, have been a different story — dividing the candidates to some degree. Not all are holding back or playing safe on the issue, though. Julián Castro defended reparations for descendants of slaves in an interview with CNN. And he's got a point.

Castro, Obama's Housing Secretary, made an argument for reparations in the interview, but he stopped short of endorsing the policy. "If under the constitution we compensate people because we take their property, why wouldn’t you compensate people who actually were property," Castro said on CNN. Castro's position is to appoint a presidential commission on the matter.

He went on to criticize one of the frontrunners in the race, Sen. Bernie Sanders. The Vermont senator said on The View last week that there were better solutions than "just writing out a check" to solve the lasting inequalities.

Castro said that in other arguments like Medicare for All and free college — two big proposals of Sanders' — there hasn't been a problem with the idea to "write a big check." So Castro questioned why the hesitation when it comes to reparations.

Sanders opposed reparations in his 2016 campaign. While he hasn't changed his position, Sanders has tried to frame himself as vocally supportive of diverse communities this time around. "I think what we have got to do is pay attention to distressed communities: black communities, Latino communities, and white communities, and as president, I pledge to do that," Sanders said on The View.

Sanders' full comment was in response to Sunny Hostin who pushed him on the idea of monetary reparations. "I think that right now, our job is to address the crises facing the American people and our communities, and I think there are better ways to do that than just writing out a check," Sanders then said.

Castro's criticism of Sanders has gotten his name in the news, which in turn could help improve his standing in the polls. Currently Castro is polling at around 1 percent in Iowa, the first state to decide on the 2020 Democratic nominee.

He's positive he can move that higher. "As you know, if we were to look at any presidential cycle over the last 40 years, oftentimes it’s people who have started off at 3 percent, 1 percent, 2 percent — including Donald Trump, who at one point was at 1 percent, right before he announced — that can win the nomination," Castro said on CNN, adding that he's certain his time in Iowa will push him higher.

"I’m articulating a strong, compelling vision for the future of this country — to make the country the smartest, the healthiest, the fairest and the most prosperous nation on Earth," Castro said. "It is a long road, a long journey, and I’m going to go out there and make my case."

Goinp up against Sanders — and the others — won't be easy, but Castro isn't backing down.