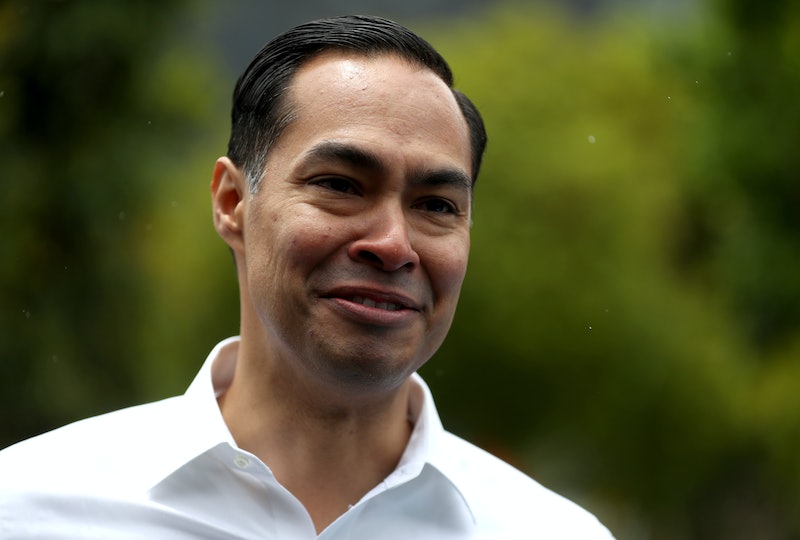 Presidential candidate Julián Castro is in the process of releasing his plan for combating a problem many Americans face: finding an affordable place to live. Castro's housing and rent plan, according to his website, will deal primarily with three key topics: affordability and homelessness, reinforcing housing anti-discrimination policies, and bolstering homeownership. His policy proposals come just as a new report indicates that the American housing crisis is as dire as ever.

"Housing is a human right," Castro says in the introduction to his platform. "Housing is also a platform to opportunity, something I know through personal experience, through data, and through the stories of the many people I have met in my 11 years of public service." (Castro served as the secretary of housing and urban development from 2014 to 2017.)

And, Castro is certainly onto something insofar as highlighting the fact that housing is a huge problem in the United States. The National Low Income Housing Coalition’s annual Out of Reach report was released on Tuesday, and, according to its results, the nation is majorly struggling to find affordable housing.

According to the report's infographic, a person making the federal minimum wage ($7.25/hour) is unable to afford a two-bedroom rental in any state in the entire country. The most expensive states to live in, based on rental price and projected necessary hourly wages, the report found, were Hawaii, California, and Massachusetts. In Hawaii, the report indicates, a person would have to make either $36.82 an hour, or else work 146 hours a week at minimum wage, in order to make rent. In the cheapest state to rent, Arkansas, a person would still have to make nearly double the federal minimum wage to afford a two-bedroom.

In his platform description, Castro says he wants to focus on "providing more housing choice vouchers for low-income residents, and creating a refundable renters’ tax credit for middle-class Americans." He emphasizes that there is not a one-size fits all solution when it comes to tackling the affordability crisis because everyone has a different social or economic situation.

That being said, his goals are lofty. Castro says that his plan for housing in the United States will "end veteran, child and youth homelessness" within four years, and "end chronic homelessness by the end of 2028."

One of his most significant proposals includes turning the housing choice voucher program into a "fully-funded entitlement program," arguing that as it stands, only 25% of eligible families actually receive assistance. (In Castro's view, according to his platform, every family making less than half of their area's median income should be eligible for housing vouchers.)

He also wants to make sure that students who take on loans to pay for school are not unfairly excluded, which can make it more difficult for low-income young adults to find an affordable place to live.

But beyond making sure that folks receive the help they're eligible for, Castro also wants to make sure that there is enough space for them to go. Specifically, he wants to raise the Housing Trust Fund and the Capital Magnet Fund by about $45 billion per year. That money would go toward building more public housing options, with an emphasis on durability and sustainability.

Castro's ideas for solving the U.S. housing crisis are definitely lofty, but at the same time, research shows that the situation is dire.