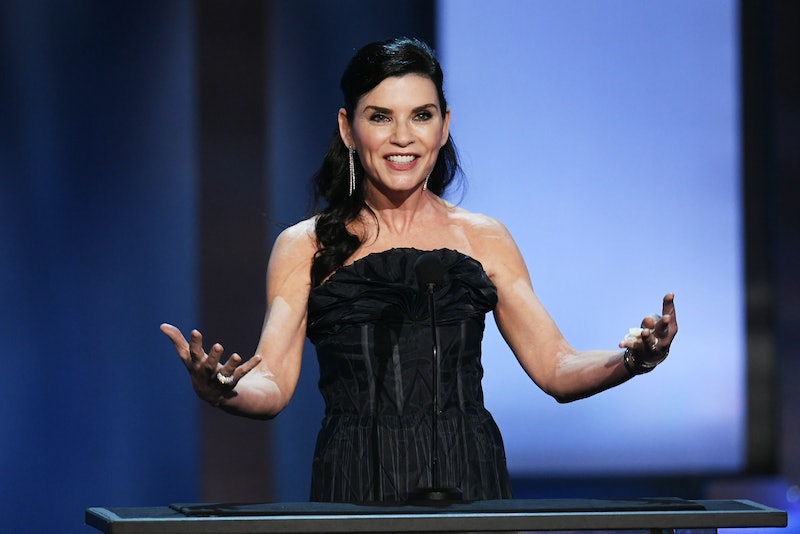 Fans of The Good Wife might be wondering why Julianna Margulies' character, Alicia Florrick, hasn't appeared on the spinoff The Good Fight. Apparently, the reason is simple (and pretty disappointing). During an interview with Deadline on Sunday, April 7, Margulies explained why fans won't see her on The Good Fight, claiming that "CBS wouldn't pay" her enough to appear on the new show.

"CBS wouldn't pay me," Margulies claimed her interview with Deadline. "The showrunners had found a nice away to reintroduce my character, a story that was to span three episodes. I was really excited about the idea, but CBS refused to pay my (ask)."

Deadline reported that the actor asked for her "regular fee," but was offered a pay amount equal to that of a guest star to appear on the spinoff. "I'm not a guest star; I started the whole thing with The Good Wife," Margulies said. "I wanted to be paid my worth and stand up for equal pay." The actor continued, noting, "If Jon Hamm came back for a Mad Men spinoff or Kiefer Sutherland wanted to do a 24 spinoff, they would be paid."

Margulies made a great point, and showed she wasn't afraid to bring gender inequality into the conversation. While the specifics of her offer are being kept private, between her and the network, it is hard to imagine a man not being paid their regular fee for appearing on a high-profile spinoff. And considering the fact that Margulies won two Emmys for The Good Wife, asking for her regular pay seems pretty reasonable.

To make things even more disappointing for fans, The Good Fight co-creator and executive producer Robert King had previously teased how Alicia might have fit into the new spinoff — and it sounded pretty great. In a conversation with reporters in February, per Deadline, King said that the writers had thought about "making a big episode where she [Alicia] would be at the resistance," facing off with Christine Baranski's character, Diane, Deadline reported. But it sounds like that won't be happening after all.

"To be perfectly honest, I was shocked. I was more surprised than hurt," Margulies told Deadline about the pay situation. "I thought, what are you worth? If you are worthless, if you are not valued for your work, than what's the point?"

The actor had hinted at the discord in a previous interview with Deadline published in February. At the time, she told the outlet that she had been in talks with the Kings, but that they had failed to finalize a deal. "I think we've put the idea to bed this time, unfortunately," she said. "I really wanted to do it."

It's disappointing to know that the actor won't be appearing in The Good Fight, especially since it sounds like there really were plans in place to have her be a part of the CBS All Access spinoff. But, based on her most recent comments, Margulies clearly has no interest in appearing on The Good Fight, which means that, unfortunately for fans, Alicia Florrick won't be returning to TV anytime soon.