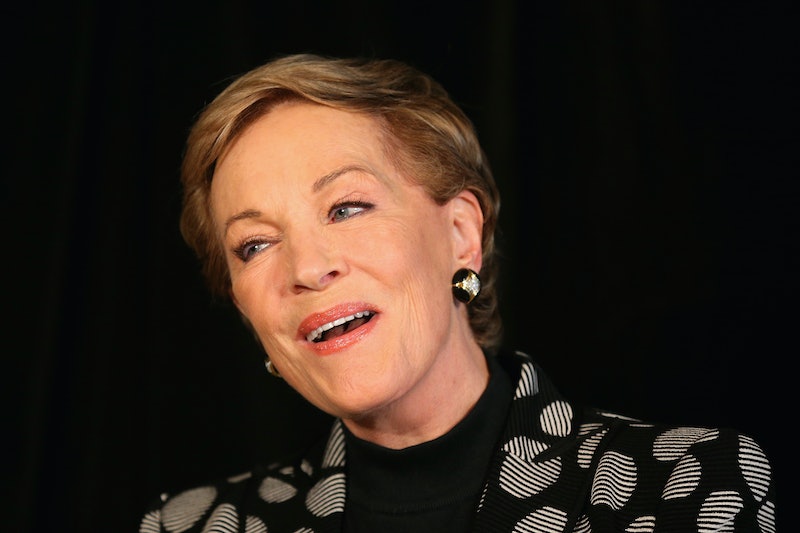 Shonda Rhimes has welcomed many talented actors into her circle of TV shows, and now it seems she's just nabbed one of the Hollywood greats. Julie Andrews has joined Shondaland's period drama for Netflix and her character is basically the equivalent of Kristen Bell's role in Gossip Girl. The series is based on Julia Quinn’s best-selling series of novels, Bridgerton, though Rhimes' project — which will consist of eight episodes total — currently remains untitled at this time.

The story is set in the "sexy, lavish and competitive world of Regency London high society," according to a press release provided to Bustle. As for Andrews' involvement in the story, she will voice the role of a character called Lady Whistledown, who is anonymous to her readers and described as being a "mysterious, sharp-tongued gossip writer [who] uses a curious mix of social commentary and scathing insult to send the season of 1813's ton into an all-out frenzy."

The setting may not be in New York City and her gossip may not be directed at youthful teens on the Upper East Side, but there's no denying the obvious parallels between the narration of Gossip Girl and the narration of Rhimes' latest undertaking. And to be quite honest, it sounds amazing.

The official synopsis for the untitled series, reads as follows:

"From the glittering ballrooms of Mayfair to the aristocratic palaces of Park Lane and beyond, the series unveils a seductive, sumptuous world replete with intricate rules and dramatic power struggles, where no one is truly ever on steady ground. At the heart of the show is the powerful Bridgerton family. Comprised of eight close-knit siblings, this funny, witty, daring and clever group must navigate the upper ten thousand’s marriage mart in search of romance, adventure and love."

As of now, no official release date for the series has been announced, though it is scheduled to debut on Netflix sometime in 2020. That may seem far away right now, but now that Andrews has joined the ensemble cast, it's all but guaranteed to be well worth the wait when all is said and done.

Andrew is a true icon in the entertainment industry, having starred in countless classics that are still as much beloved today as they were when they first came out. Mary Poppins, The Sound of Music, The Princess Diaries, the list goes on and on with her impressive accomplishments. Not to mention that she already has plenty of experience when it comes to voicing characters as well in works such as Despicable Me, Shrek 2, Shrek the Third, Shrek Forever After, and Enchanted.

Suffice it to say, everything Andrews touches turns to gold, so if Rhimes was hoping to create another successful series, she's already off to a great start. Fans may be used to Andrews serving up spoonfuls of sugar, but sweetness will have to take a backseat for this new gossipy role she has coming up next year. Let's hope this Lady Whistledown has a memorable sign-off, but until then: XOXO.