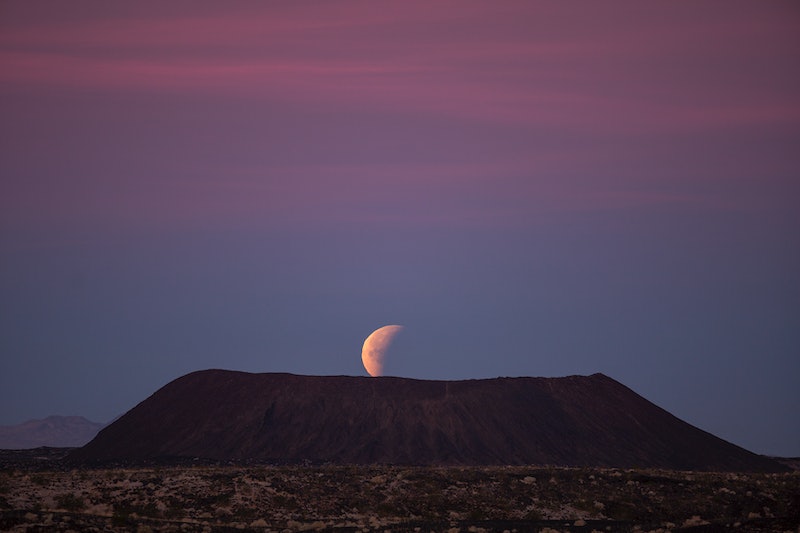 If you are interested in astrology and want to know more than just whether your sign is compatible with your crush's or not, then you might be curious to know more about the moon cycle and how it could affect you. Astrology is based on the positions of celestial objects, so, of course, the moon plays a big role. On the 12th, the July 2018 new moon will happen, and it's spiritual meaning has to do with which astrological sign it's in at that time, as well as the meaning of the phase overall.

According to astrology writer Molly Hall for ThoughtCo, the new moon marks a "time to rest, before the next cycle of happenings." It's also "a great time to set intentions for things you'd like to create, develop, cultivate, make manifest." In contrast to full moons, which Hall writes are for "taking action and celebrating the fruit of your efforts," new moons are "a blank page on which to speak your dreams out loud."

In addition to the new moon occurring on the 12th, there will also be a partial solar eclipse that day. This, Astrology King notes, means the ideas that go along with a new moon are intensified. (A solar eclipse occurs only during a new moon, but the moon must be aligned in a specific way with the Earth's ecliptic.) According to Astrology King, "the July 2018 solar eclipse signals the right time to transform something in your life holding you back from happiness and success." The site continues, "This is the ideal time to make a fresh start, so write your new goals down on a sheet of paper. The best time for making a new start is from the solar eclipse to the July 27 lunar eclipse."

During a new moon, the sun and the moon are in the same sign. This means the sign most affected in the case of July 12 is Cancer, with the moon moving into Leo. (The moon stays in a sign for two days at a time.) For Cancer, it will be a particularly "charged time with concentrated energies of that sign," writes Hall.

According to Sara Coughlin for Refinery29, the new moon on the 12th will mean Cancers can look forward to some heavy emotions. She also explains, "You may find your thoughts turning toward the women in your life or the people who share your home (in a literal or figurative sense) — follow that current and take the time to show those souls some gratitude." That said, Cancers shouldn't let their feelings get the better of them, and should try to turn their emotions into actions. "Avoid going through an entire box of tissues by journaling your heartfelt reflections or channeling your feelings into a to-do list of gestures: write your mom a letter just because, check in with your coworker who had a hard week," Coughlin writes.

The July 12 new moon is also a supermoon, meaning it's closer to the Earth and would appear larger if we could actually see it. A supermoon during a full moon is a beautiful sight; a supermoon during a new moon is still invisible or just a sliver. As for what this means astrologically, not too much other than perhaps even more added intensity to what the moon phase, position, and partial solar eclipse already mean. Ophira and Tali Edut of AstroStyle write, "We believe the proximity of the moon can dial up the energy people receive — and if nothing else, a full supermoon can make quite a lovely sight (and social media buzz)."

So, whether you plan to write down your aspirations or are just going to keep going about your business as usual, now you know what the deal is with the upcoming partial solar eclipse super new moon.