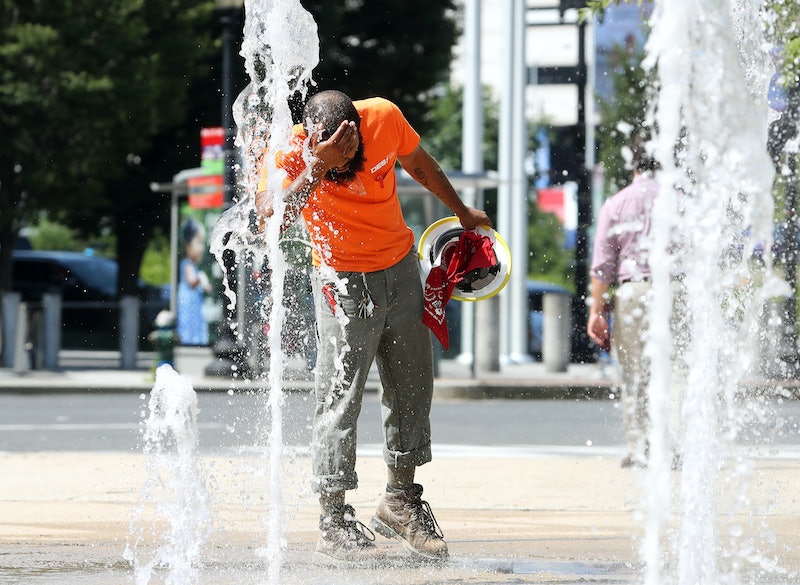 New data from the National Oceanic and Atmospheric Administration (NOAA) revealed that July 2019 was the hottest month ever recorded on Earth. In addition to producing dangerous and uncomfortable heat waves around the world, July's hot temperatures are disconcerting for another reason. As the Washington Post described, many experts believe that July's temperatures point to further evidence that climate change is having an increasingly substantial impact on the planet.

As USA Today noted, NOAA's data revealed that the average global temperature for July 2019 was 62.13 degrees Fahrenheit, a number that is 1.71 degrees Fahrenheit higher than the average global temperature for the 20th century. The Washington Post also added that Deke Arndt, the head of climate monitoring for NOAA, emphasized that July is the 415th continuous month that's been hotter than the 20th century average.

Katharine Reich, the Associate Director of Strategic Planning and Communications at UCLA Center for Climate Science, tells Bustle that this temperature increase has significant ramifications. "Such an increase an average temperatures may not sound like a lot, but bear in mind it's an average — many places are experiencing greater warming," she tells Bustle. "And even seemingly small amounts of global warming cause ripple effects throughout the climate system, from sea level rise to changes in rainfall patterns to more acidic oceans, with consequences for human and natural systems across the globe."

The Environmental Protection Agency (EPA) similarly emphasized some of the dire consequences of rising temperatures in a student guide to climate change on an archived version of its website. As the agency noted, rising global temperatures can produce longer and more frequent heat waves, which can cause sickness and death. Moreover, the EPA reported, rising temperatures affect many other environmental elements, like plant and animal life, weather patterns, sea levels, and ice melting rates, among other things.

Rising temperature-induced changes to all of these environmental elements then cause a host of other problems, including more frequent extreme weather events (like hurricanes and flooding), increased droughts and wildfires, and loss of animal and plant species, according to the Environmental Defense Fund and the World Wildlife Fund. And, of course, these environmental problems can then contribute to significant human hardships, like poverty and hunger.

Dr. Sean Birkel, S.D., a Research Assistant Professor at the University of Maine's Climate Change Institute and Maine State Climatologist, reflected on some of these challenges. "This record is in conjunction with a record heat wave over parts of Europe and Greenland, record wildfires across parts of the Arctic in Siberia and Alaska, and continued decline of Arctic sea ice," Birkel says to Bustle. "It’s further indication that climate change is having increasing impact on our planet with important implications for human societies."

Overall, as experts attest, July's record-breaking average temperature serves to illustrate just how profoundly and rapidly climate change is impacting the world — and why it's so urgent to take action to stop this trajectory. As Dennis L. Hartmann, Ph.D., a professor in the Department of Atmospheric Sciences at the University of Washington, tells Bustle, "The [earth's] warming will continue until we reduce our release of greenhouse gases, especially CO2."

More like this
The Summer Solstice Spiritual Meaning, Explained
By Jessica Booth and Brittany Beringer
5 Ways To Stand In Solidarity With Women In America From The UK
By Sophie McEvoy
How To Fight For Reproductive Rights, Based On How Much Time You Have
By Courtney Young
13 Summer Solstice Quotes To Celebrate The Longest Day Of The Year
By Sadie Trombetta
Get Even More From Bustle — Sign Up For The Newsletter