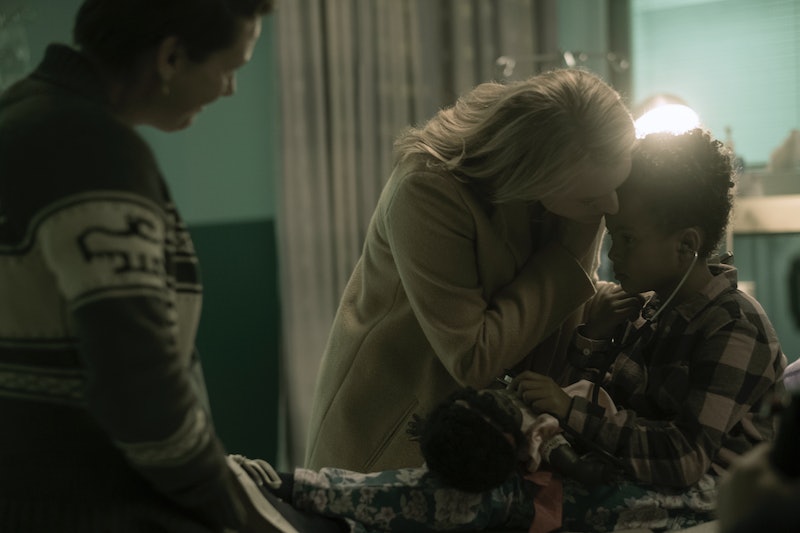 A major reunion finally happened in Gilead, but the long-awaited moment didn't play out as everyone might have hoped. In Wednesday's episode, June reunited with Hannah on The Handmaid's Tale, and even though she got to actually speak with and hold her daughter, their time together was horrifyingly brief. More than that, it was heartbreaking.

As with all supposedly good things on The Handmaid's Tale, it's easy to question whether this gift was ever meant to make June happy. Her meeting with Hannah is arranged by Commander Waterford, allegedly as some kind of consolation. As he loads her into a car to be driven by Nick to an unknown location, he promises she'll like the surprise — but it's hard to know what Fred (or Serena) is thinking in this moment. Earlier in the episode, he raped June, as Serena held her down, under the pretense of trying to induce labor. Does he actually feel bad? That doesn't seem likely, even though the scene was particularly violent — with all parties finally acknowledging how nonconsensual the "Ceremony" is in Gilead. He may be trying to manipulate June; it wouldn't be the first time Fred has used emotionally abusive tactics, following up cruelty with kindness in order to play the hero and curry June's favor.

On the other hand, this could just be a power trip: Waterford likely knows that seeing Hannah and having to leave her again will do June more harm than good. June is devastated and breaks down sobbing after she's forced to say goodbye to Hannah a second time — and the fact that their supposedly secret meeting in an empty mansion is busted, and Nick is carried away after apparently being shot, is certainly suspicious.

Even before the trip goes south, June's time with Hannah is painful. When mother and daughter actually speak, Hannah is afraid at first, but she warms up with time. She asks if June was OK after being hit on the head the last time they saw each other. "Did you try to find me?" she asks. June promises she did. Hannah isn't convinced: "Why didn't you try harder?" It's a beautiful, raw scene, as June swallows everything she must be feeling, takes her daughter's hands, and asks about Hannah's new family.

Eventually, Hannah finally breaks and calls June "Mommy" with tears streaming. "I need you to do something for me," June says. "Enjoy your life. Love your parents, and you do whatever they tell you. OK? Because I need you to be careful and I need you to keep yourself safe."

It takes them two times to say goodbye before Hannah is effectively whisked away in a car. What's interesting is that June doesn't say anything about Luke being alive. Is she still protecting him or herself by withholding that information?

There is some hope to be found here. Unlike Nick's complacent child bride Eden, for example, Hannah doesn't seem to have been completely brainwashed or indoctrinated into Gilead's mindset yet. She has a new name now, Agnes, but she never asks her mother to call her that. How creepy would it have been if Hannah had wished June a "blessed day"? Maybe she has too much of her birth parents in her.

She also doesn't seem to have been told horrible things about her mother that would turn her against June — or, if so, Hannah didn't take them to heart. She notices that June is pregnant and has some idea of what a handmaid is, but thankfully not too much. Like the econowife June met earlier in the season, the prevailing narrative about handmaids in middle-class Gilead seems to be just that "they give up their babies."

Will June ever see Hannah again? She seems to think so, and it doesn't seem impossible. On a large scale, the resistance movement scored a win when Luke made the letters from the women of Gilead public. But June's situation at home is still bleak, and even though she was finally able to make amends with her daughter and get some kind of closure, it likely doesn't feel like closure to her. Scenes like the one between June and Hannah, which brought to life the long-term consequences of separating a mother and her child, are devastating to watch.

More like this
‘Squid Game’ Creator Hwang Dong-Hyuk Just Dropped A Major Season 2 Tease
By Brian Anthony Hernandez and Bustle Editors
On 'The Handmaid’s Tale,' Christine Ko Fights Back
By Gretchen Smail
Everything You Need To Remember Before ‘The Handmaid’s Tale’ Season 5
By Grace Wehniainen
Kaley Cuoco Was Set Up With Her New Boyfriend Tom Pelphrey By Her Manager
By Hugh McIntyre and Jake Viswanath
Get Even More From Bustle — Sign Up For The Newsletter