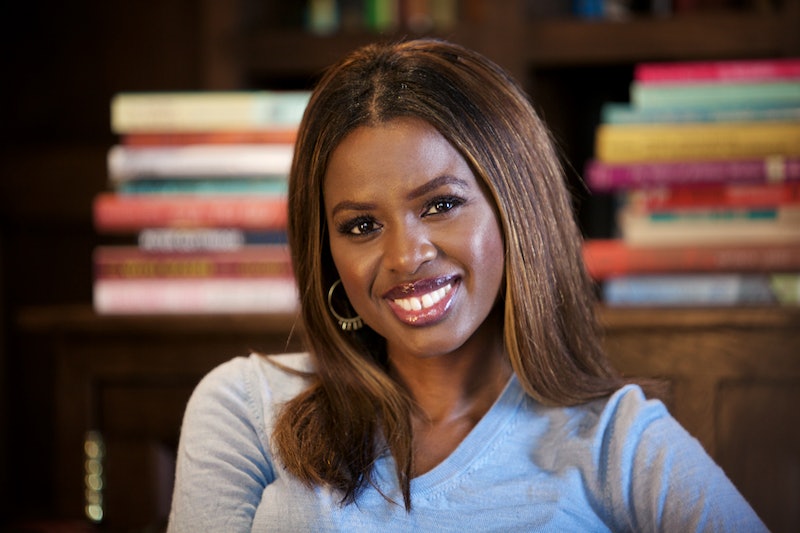 Courtesy of Harper Collins
By Lollie King
May 22, 2019

They say you should never meet your heroes because they're sure to disappoint you, but trust me when I say that's not always the case. I first met June Sarpong when I was eight years old in a fairly unusual setting. When my family and I went to visit my grandparents in Ocho Rios, Jamaica, she was there too and we all ended up riding horses in the sea together. Pretty surreal right?

Ever since then, her influence on my life has been monumental. In the '00s, Sarpong was one of the "it" faces in the media world, fronting MTV and Channel 4 shows for ten years. Since then, she has continued to carve out a successful broadcasting career and written two books, The Power of Women and Diversify. The latter, which is already available in the UK and is coming out in the U.S. on May 21 2019, tackles the issue of social division and highlights the social, moral, and economic benefits of diversity.

"Working with Nuffield College, Oxford University, in Diversify June Sarpong considers how we create and use stereotypes, and how they negatively impact our social interactions both overtly and covertly. Using personal anecdotes, referencing stories of success, and by introducing the 'ISM Calculator,' Diversify encourages readers to calculate their levels of discriminative views and limiting beliefs that they can challenge or possibly conquer as they the complete six steps."

I caught up with Sarpong to discuss the work that went into this book, including opening up about her own experiences with discrimination, and to learn about the writers and women who helped shape the person she is today.

Lollie King: What inspired you to write the book Diversify?

June Sarpong: Well the thing that inspired me to at least want to start the conversation around this stuff was when I came up against my own prejudices and unconscious bias, stuff that I didn't think existed within me being a black woman. I wanted to crack the holy grail of TV. I wanted to create a conversation around uncomfortable topics that we need to address in order to move society forwards.

LK: How did you compile the data for the book?

LK: When you were writing did you find it therapeutic, or more exhausting, to see there's still such a lack of inclusion for minorities?

JS: I think with this stuff you have to be honest. However, what I felt was not the point per say. What I wanted to do was get to the truth so then we can start finding solutions, because often what we do is pretend and ignore the uncomfortable and so nothing changes. For me it was really important to have the facts and stats, like one in three black men in America will spend some sort of time in the criminal justice system. The stats at the moment make it seem that these men do jail time when really it can be anything from a caution, community service, right up to jail, and we know what the knock on effects are. I felt it was so important to have both the UK and U.S. perspectives because I was raised in the UK but my father lived in the U.S. so I spent all my summers there and even moved there for eight years. The experiences people of colour face in both places are similar; both places are united in their titles but the experience is anything but.

Black women are ignored and perhaps the most invisible group in society even more so than our men. Black men have different issues in terms of media representation but we as black women are the most underrepresented group. The book Slay In Your Lane that I feature in shows high-profile black women in the media and other industries who still come up against prejudice. I wanted a solution-driven book, because diversity is sadly a tiny section of society. I think we should empower those who have been discriminated against, help to heal them, and get them in the mix as soon as possible. It's all about dismantling systems.

LK: As a black woman, do you feel a great responsibility to represent those that don't have the same platform as you?

JS: Yes and no. It's interesting because, when you look at everything black women are up against and still we thrive, there needs to be study into the resilience. So when you look at all the discrimination endured and still you have the Michelle Obamas and the Oprahs, that in itself is a miracle. How is that possible? Everything that could be perceived as negative is thrown at this particular group and still you get these gems. Beyonce's new documentary Homecoming is out and she cites Maya Angelou when she talks about the kind of representative she wants to be for her race, which is to show how compassionate and resilient we can be. These examples of black success are amazing.

Black women are almost the mothers of humanity because humanity started in Africa. We have a special role to play in the healing of the world, so we must understand our power and our place. We forget the power of history because it puts everything in context and you understand why we are where we are and why dominant thinking and racism still exists. In the book, I talk about the ideas Emmanuel Kampf spread around the world and how it influenced defining racial groups. You think, my goodness, one person's views have shaped humanity for this long.

LK: In the book, do you talk about your own experiences of discrimination?

JS: Yes of course! One of the examples I use is when I was working for MTV. I had one of the highest-rated shows on the network at the time and they did a magazine shoot with all of the "MTV girls" highlighting the new shows that were coming out and I was the only one not included. If it was now, in the age of social media, people would've gone mad. But then people kept calling up and the switchboards were rammed with people calling up to ask why I wasn't there and if I had left because every other female presenter was there. I found out it wasn't the magazine that didn't want me but the MTV PR team didn't think I was appropriate for the shoot, which was a beauty shoot. I was so hurt but all the viewers called up demanding that I should be included. To be honest, there have been so many times in my career when things like this happened. With my male co-stars, I don't know how much they were paid because there isn't the transparency we have now but I know it was more than me. There were lots of opportunities for my white co-stars that weren't available to me, so I had to make my own path.

LK: What were the best and worst things about writing Diversify?

JS: Worst was how long it took to write — two years is a long time! The best is the conversations I've been able to create a safe space for these conversations. Those who have been discriminated against are often forced into silence. Kofi Annan [former UN secretary general] wrote a review of the book and he's almost like a godfather to me. He was always so supportive and even came when I got my MBE.

LK: You've also released another book, The Power Of Women, are you building a larger body of works or are these to be taken individually?

JS: All the books that I write and will go on to write will be in this space. I really want to move the needle forward in terms of diversity and inclusion. It's important to understand that we need a nuanced debate, taking into consideration the different experiences lived by the different groups. For me, this is a passion point and somewhere I want to stay and grow in and create change. I've been speaking to companies so we can get this stuff right at work too.

LK: Do you have a favourite novel?

JS: I read this when I was younger and go back to it all the time, its Maya Angelou I Know Why The Caged Bird Sings. As you get older, you understand that book more, and I think everyone should read it once every five years. As you experience life more you get more out of the book, she's everyone's honorary grandmother.

LK: When was the first time you "saw yourself" and saw someone on screen represent you the way you wanted to be represented?

JS: Flouella Benjamin and Oprah. But I'll be very honest, I was lucky in the sense that I grew up around these very strong Ghanian women so I was never the kid that needed to see myself represented outside to feel valuable. I believe "you can't be what you can't see" but we cannot undervalue how important it is to empower our children in our own homes. The self-confidence my mother had in her beauty and herself as a woman, the power of my grandmother, who was an illiterate woman from a tiny village in Ghana who then became a successful market trader. Seeing those women and their confidence helped me, so anything else I got from the outside was a bonus. We need to do more so our children aren't seeking acceptance in a world not designed to affirm them. We better be doing that in our own home! I knew about my Ashanti history, the Anansi stories, and my rich history.