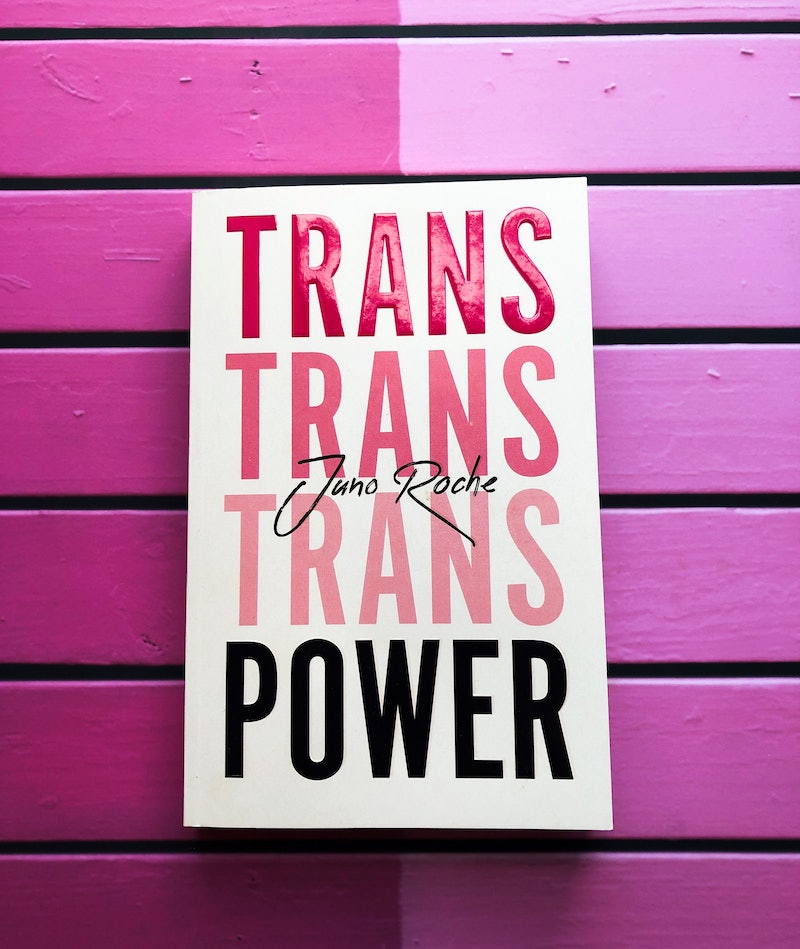 What does it mean to be trans in 2019? That's what Juno Roche is asking in her new book, Trans Power. After writing about trans identity and the LGBTQ experience for years, the writer and activist released her first book in 2018, Queer Sex, which discussed intimacy, pleasure, and relationships with leading figures from the trans and non-binary community. Now Roche is back with Trans Power, her second book, in which she strips away any debate surrounding gender binaries and expectations and asks readers to consider trans as an identity with its own power and strength. As she writes in the book, “All those layers of expectation that are thrust upon us; boy, masculine, femme, transgender, sexual, woman, real, are such a weight to carry round. I feel transgressive. I feel hybrid. I feel trans.”

I spoke to Roche about the book, the problems with binary gender, the importance of pleasure, and much more.

Alice Broster: What inspired you to write Trans Power?

Juno Roche: I really wanted to inhabit the word trans. When people would ask me "are you a trans woman?" or even "trans feminine," it didn’t make any sense to me. The only word that works for me is trans. Not even transgender because it's gender stereotypes that are messing everything up.

When I transitioned, trans was seen as almost a shameful word. You didn’t want to let anyone know you were transgender. For me, I thought it was a really empowering word. I wanted to look at what it means to be trans in 2019.

AB: The book is shaped around conversations, why did you frame it in this way?

JR: Good art creates space. I felt a sense of responsibility to create space for more people, so I needed them in the book.

I love talking to people and listening to people talk about how they craft their lives. When I first started writing people would say "oh we’ve already had a trans article this month," and it’s just one person. That meant people didn’t always put the ladder down to let other people come up. I want to have as many people involved as possible to create a wider dynamic.

AB: How did you choose which direction the book would go in?

JR: With the last book, I had a loose plan, but both Queer Sex and Trans Power were reactive, so I’ve gone on a journey. I love the actual journey of going to interview people because they become part of the book. I will go to the part of South London that my family is from and it makes me think about my working class upbringing and privilege.

I carefully curate the people I want to speak to but often prepared questions are blown out of the water. If you’re interviewing people you’ve got to be in the moment. You can shape the conversation but you can’t control it.

AB: In your first book, Queer Sex you focus on sex, desire, and dating. Why did you want to look into those topics?

JR: When I had surgery, people said they were going to make me look "real," but no one talked to me about pleasure. Sex matters. There’s no point having a body that looks real if you can’t have sexual pleasure, unless you’re not interested in that. Even if it’s self pleasure, it really matters. At some points, I felt like my body was broken and I needed to understand how to find my pleasure in a body that no one tells you about.

AB: You were very open about your fears of rejection as HIV-positive trans woman. Do you think society is making progress to de-stigmatise HIV?

JR: I’d like to say that we are but then try going on any dating site and saying you’re HIV positive. HIV is still this secret, which I think is why I speak about it so much. I’m undetectable and I knew what that meant 16 years ago but when I say that to people they ask "how do you know?" It’s all about proving it. I’ve already got people saying prove you’re a real woman. There came a point in my life when I said, "no I’m not doing this anymore."

AB: How important do you think representation and community is?

JR: I think it's so important. If you take a programme like Pose I get to see a trans woman living with HIV. I never imagined that would be the case. Representation really matters but we shouldn’t kid ourselves that someone being on the front cover of a magazine if going to trickle down and change structures. That’s why I love that often the people that I’ve interviewed go on to do their own interviews and continue the conversation.

It’s easy to roll back wins. If there’s just one successful trans person they can be rolled back very easily but if there’s thousands of people in a network you've got people talking and ready to support each other. Representation will change some hearts and minds but it won’t change laws or structures.